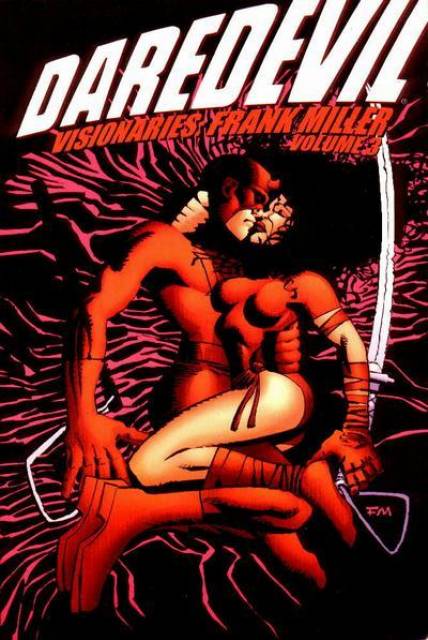 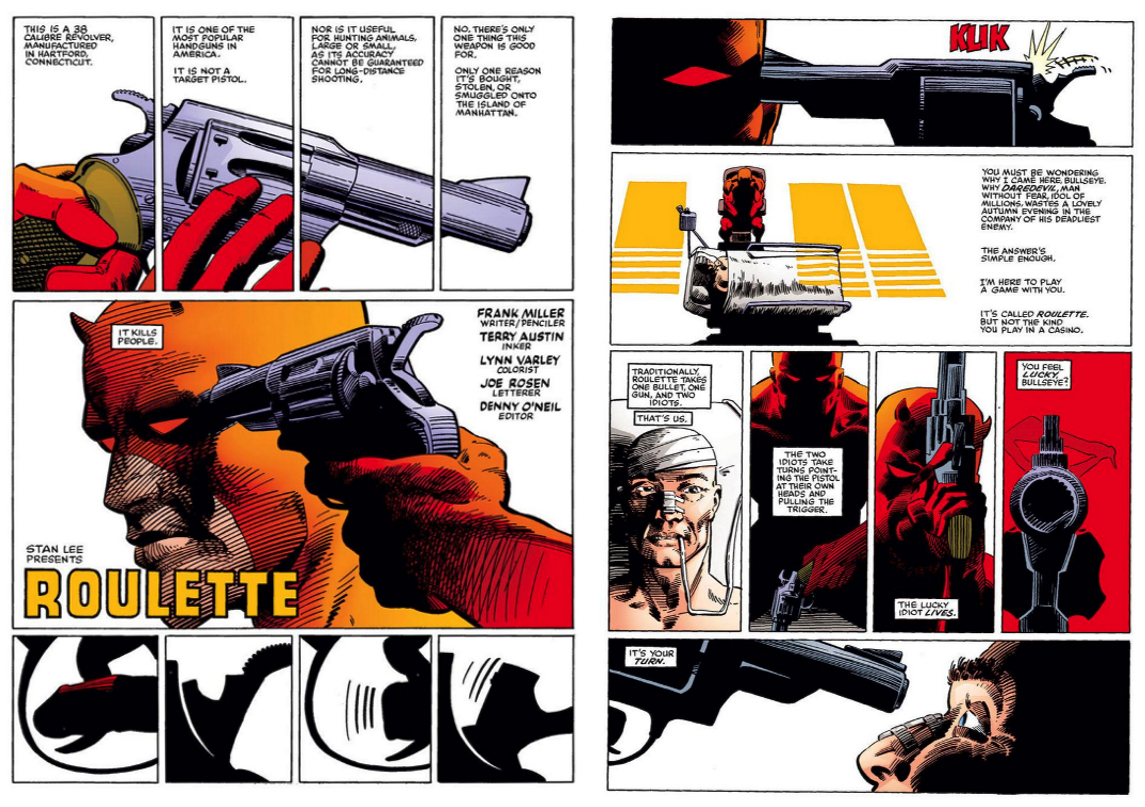 At some point, being Daredevil‘s writer and primary artist was going to become too much for Frank Miller. He’d been relying on Klaus Janson to finish off the art for some time, so it’s logical that he would take it on entirely. It proved to be an extraordinarily good move.

‘Child’s Play’ saw Janson taking over more artwork, credited as contributing artist on this Roger McKenzie co-written story with Miller. It has simple, yet beautiful frames, both visually stunning and harrowing, capturing the murkier side of New York in the early 1980s. The dialogue is initially clunky, McKenzie’s verbose style by now a massive contrast to Miller’s, but as we move to the second chapter and Miller writing alone matters improve. Miller’s gritty writing and Janson’s technique of employing simple backgrounds, fewer frames, and contrasting colours, gives the dark subject matter a stark beauty.

Janson provided the complete art from the third story here, ‘Guts and Stilts’, Miller now able to concentrate on the writing, although characters like Stilt Man and Turk feel slightly recycled. He balances this by making Matt Murdock’s business partner Foggy Nelson the centrepiece, and continuing an exploration of psychological changes Matt exhibits after the death of Elektra, but from Foggy’s perspective. This highlighted the shadow side of Matt’s soul, a worrying need for control over fiancé Heather Glenn emerging that continued into ‘Widow’s Bite’,  where Foggy enlists the help of a returning Black Widow to save Heather from Matt, and Matt from himself. Miller blends the comedic and dramatic seamlessly, while Janson’s artwork accentuates it with subtle yet precise facial detail that adds emotional heft.

Included in ‘Widow’s Bite’ is the return of Daredevil’s mentor Stick and ninja gangsters the Hand, the latter attempting to resurrect Elektra and use her as an instrument of vengeance. Stick and his band of warriors fight a desperate battle to prevent this with Daredevil and Black Widow becoming involved. Janson drew some outstanding and intense action scenes, Miller confidently scripting sequences that required no dialogue to add dimension to an epic struggle between light and dark. Janson’s art compliments the character driven story extremely well, providing a number of iconic frames worthy of pin-up status.

‘Roulette’ was Miller’s last story, Janson having left shortly before. He penned and pencilled this masterpiece, a controversial and unsettling story about the effects of violence on the human soul, especially Daredevil’s. It’s simplistically beautiful, the vibrant colour contained by white backgrounds, and so magnificently written it is still considered among his best.

Extras include What If?#28  pencilled by Miller before his writing phase, re-imagining Matt as an agent of Shield, also collected in Daredevil by Miller & Janson Volume 3.  Another What if? story that Miller wrote and pencilled, has the Watcher narrating a reality where Elektra never died, theorising what might have happened between her and Daredevil. Again it feels both hopeful and sad, the tragedy of Daredevil’s life clear to see. There’s also a solo Elektra story from 1981, entirely Miller’s work and and a gob-smacker rendered entirely in black and white, exploring events that propelled Elektra to New York and back into Daredevil’s life.

The earlier material here, for editorial reasons previously held back, has a writing style that Miller worked to shed,  and consequentially this collection is marginally less dynamic than the preceding volume. That, though, is quibbling over very high standards, and this is another fine collection that leaves you both satisfied and content.

The material is also collected in the Daredevil by Miller & Janson 2-3, and Omnibus anthologies.