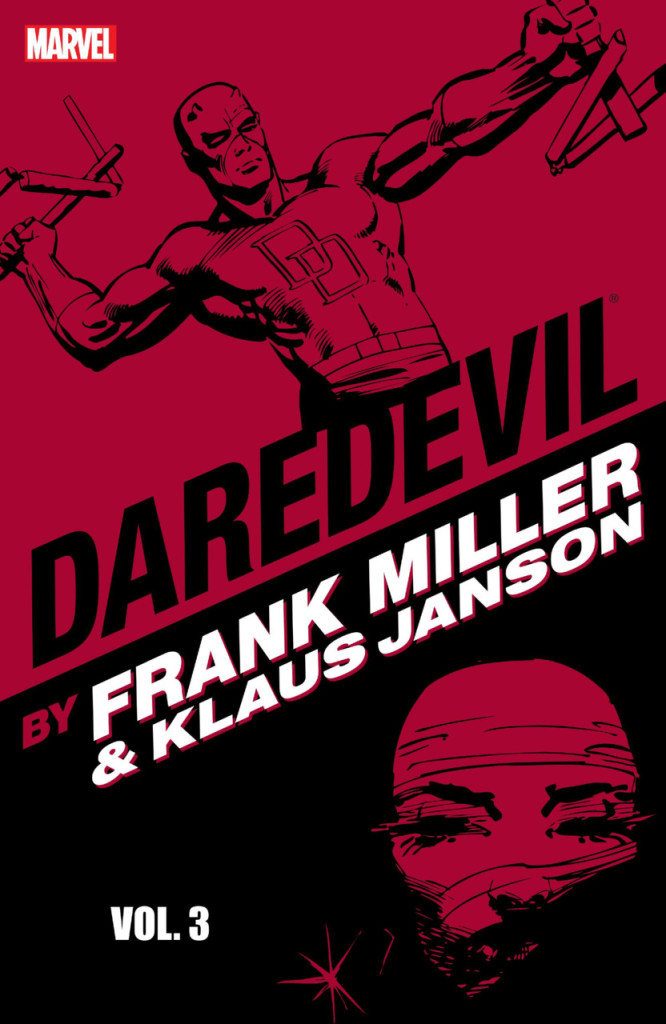 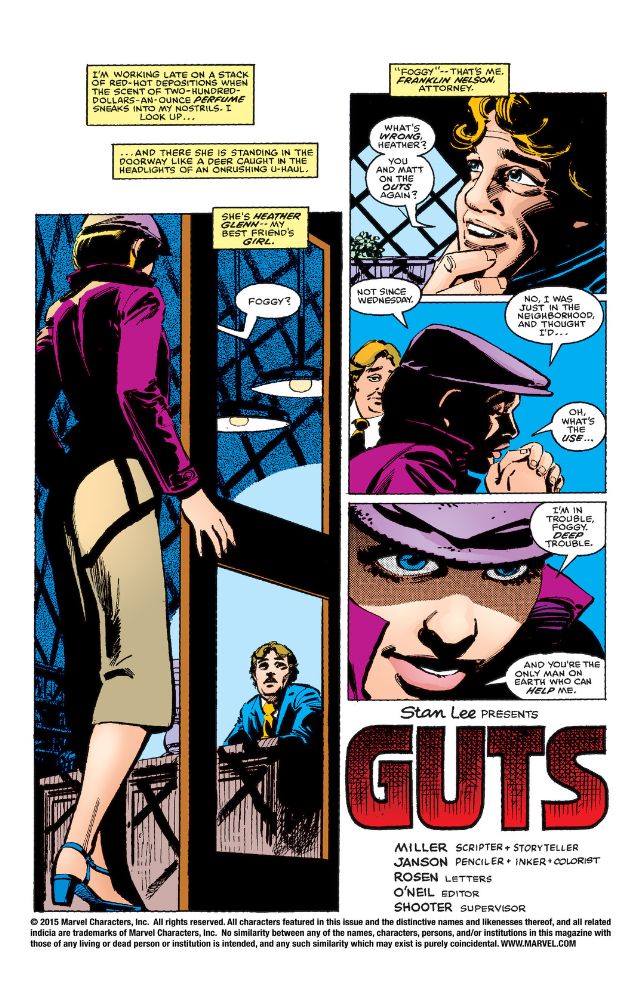 This volume contains the concluding issues of Frank Miller’s and Klaus Janson’s epic Daredevil run, but has much more to offer. Included are their contribution to a What If? issue, Miller story ‘Badlands’ pencilled by John Buscema, and graphic novel Love and War with Bill Sienkiewicz art.

Miller’s stories abound with social commentary. He looked at corruption, bribery, extortion, and politicians funded by crime syndicates in ‘Guts and Stilts’, reflecting the New York of the era where such incidents were not uncommon. Stilt-Man in particular, and sometimes other characters, feel recycled and, in places, Miller reverts to over-long dialogue.

The partnership ends on a high-note with a last stand against ninja assassins the Hand in ‘Widow’s Bite’. Daredevil, Black Widow, and Stick all feature as the Hand apply black arts to resurrect Elektra and convert her into their deadly instrument of destruction. It’s a beautifully crafted story. Janson had taken over all the artwork (even colouring), endowing Daredevil with a new vibrancy. Miller’s scripts often enable Janson’s art to carry the story without the need for dialogue, some battle scenes taking place in near silence, with only brightly coloured sound effects to enhance it. Jeph Loeb and Tim Sale would echo this in Daredevil: Yellow. The finale is evocative and moving, an iconic picture among a number of stand-out frames in this story alone.

‘Roulette’ is a masterpiece. Penned and pencilled by Miller, featuring a paraplegic Bullseye, it’s a controversial piece of work  even by modern standards. Miller explores the effects of violence on children, and the soul of the hero himself, in a story widely considered one of his best. It also introduces an abusive side to Jack Murdock that Miller would use for The Man Without Fear.

The What If? story is an alternative origin where Matt Murdock is helped by Tony Stark immediately after the accident that both blinded him and heightened his other senses. Stark introduces him to S.H.I.E.L.D. where he becomes an agent. Miller and Janson were still penciller and inker at this stage, so while the art has the vibrancy and experimentation of their early work, the over-long dialogue and cluttered speech bubbles spoil it. It’s “okay”, more a foot-note of sorts to their other work.

‘Badlands’, is a later story lacking the costume, and Matt never speaks, simply remaining a mysterious blind man standing up for justice in a crime-ridden New Jersey town.

Miller’s ability to inject the human element into his characters is what makes Daredevil work as much as its iconic art. The dark edges of Matt Murdock’s psyche are entered as his work slips, he becomes more manipulative in his relationship with fiancée Heather Glenn, and gradually takes over her life. It’s edgy, a hard look at psychological abuse in relationships way ahead of its time. Janson uses simple backgrounds, shadings and colour contrasts to accenturate these edges. The villains are enhanced by the same technique. The Kingpin becomes even deadlier, his bursts of violence shocking and brutal, but his humanity and vulnerabilities are displayed when visiting his invalid wife Vanessa.

Love and War, though written later, fits into this narrative, spinning a story where Kingpin orders Turk to kidnap a therapist’s blind wife to ensure Vanessa is given the best treatment. Turk naturally involves someone else and complicates matters. It falls short of Miller’s earlier stories, but Sienkiwiecz’s art is outstanding.

The oversize Daredevil by Miller & Janson Omnibus encompasses the entirety of Miller’s and Janson’s run on Daredevil, but omits the additional material from this series. Most is found in the earlier Daredevil Visionaries: Frank Miller Volume 1-3.