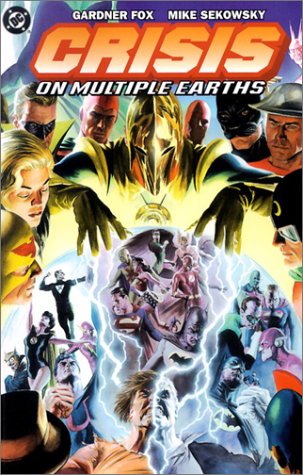 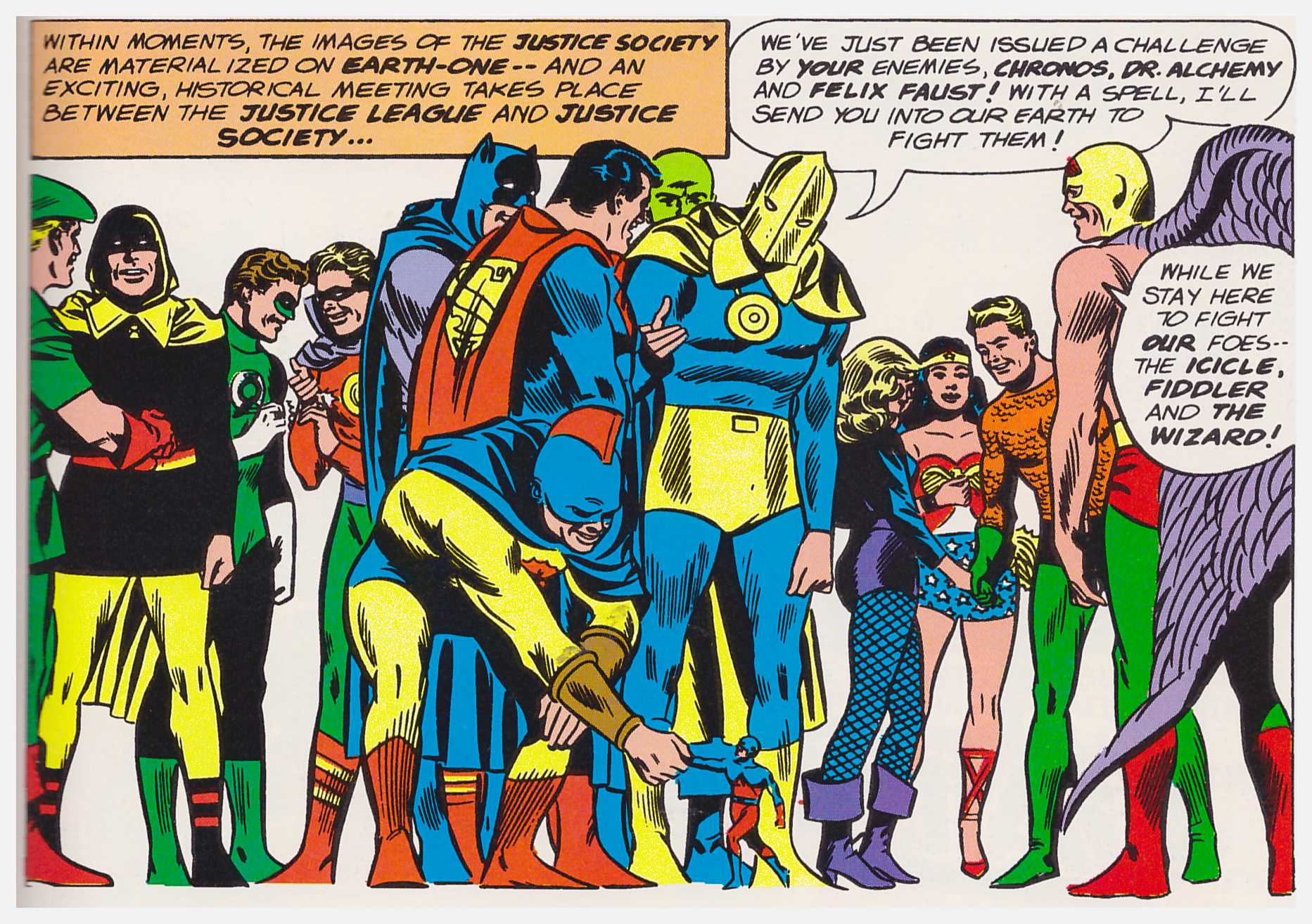 There was much celebration in the relatively small ranks of organised comics fandom in the 1960s when the then recent Justice League of America met their 1940s counterparts the Justice Society of America. The first meeting was so well received that it instituted an annual tradition maintained until the first incarnation of the Justice League’s title was cancelled over twenty years later. Crisis on Multiple Earths gathers all these stories chronologically, and this opening volume features the first four.

A spirit of good-natured joy still accompanies the first meeting between the premier super teams of two separate Earths. Flash stories had already established that his tin-helmeted analogue existed on an Earth separated by alternate vibrational frequency, and accessible to the Flash if he used his super speed to match that vibrational frequency. Using the logic of the day, the Earth housing the 1940s heroes was designated Earth-Two, while the Barry Allen Flash and his Justice League colleagues occupied Earth-One.

In the opening team-up villains have discovered the secret of transferring between Earths, and are committing crimes on the counterpart, then returning home untraceable. As with all Justice League material of this era, Gardner Fox’s plots are solid superhero science-fiction, but where they fall short by modern standards is in the complete lack of any but the most basic characterisation. Dialogue between the cast is pretty well interchangeable and designed only to explain the plot or progress it, while any captions are of the brief scene-setting kind. For all that, there’s still a frisson of grandeur as the members of the two teams meet.

The membership of the Justice Society was far larger than the Justice League, and while some had been re-fashioned in new identities, many remained largely obsolete. Over successive stories the original thrill was, for most, encountering heroes unseen for many years such as Wildcat, Sandman or Black Canary.

Their introduction was gradual, as is the initial decline in story quality after the opener. The idea of the Justice League’s villainous counterparts on Earth-Three is marginally less thrilling (“Ha! Ha! The only effect kryptonite has on me is to give me a new ultra-power”), although not without charm. The magical Thunderbolt falling under the control of Earth-One’s crooked Johnny Thunder is less thrilling than that.

Everything is drawn by Mike Sekowsky, for whose style the adjective ‘quirky’ might have been created. His double-jointed figures are posed at odd angles, motion is sometimes awkwardly conveyed, and his anatomy is far from perfect, yet this is coupled with good storytelling and packed panels. It somehow combines into such a unique style that you can’t imagine anyone else working with the characters.

The final team-up contrasts the remainder. Sekowsky cuts loose with larger illustrations to convey the scale of a being moving between dimensions, straddling planets separated by the physical strength of the Spectre. Additionally heroes and villains are randomly switching between Earths. This was produced during the era of the Batman TV show, and Fox isn’t at all comfortable with administering a similar jokey tone to his material, yet the result of that awkwardness allied with his plotting strengths is unique. The surreal elements and cosmic scope could almost signify a Grant Morrison plot. It’s still very much of its era, but bizarrely compelling.