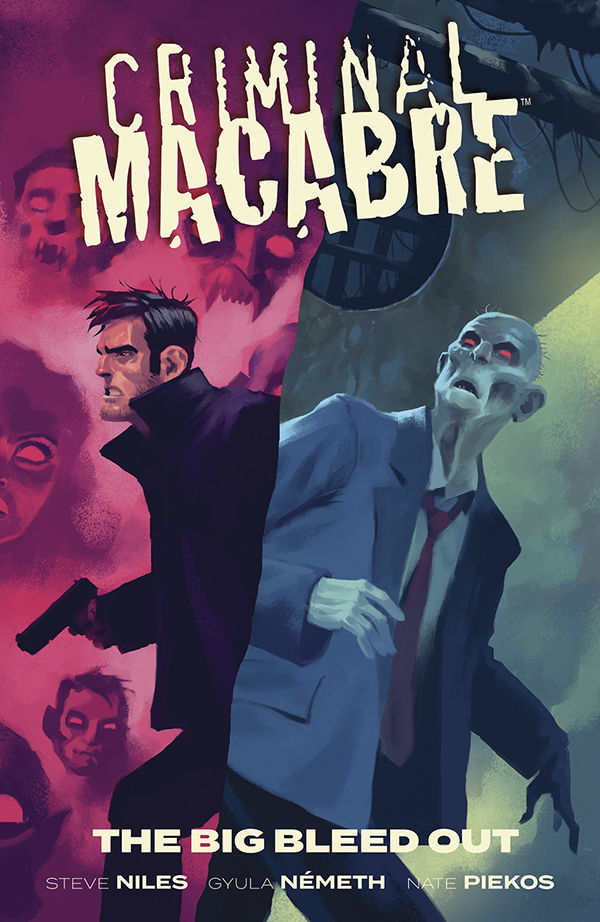 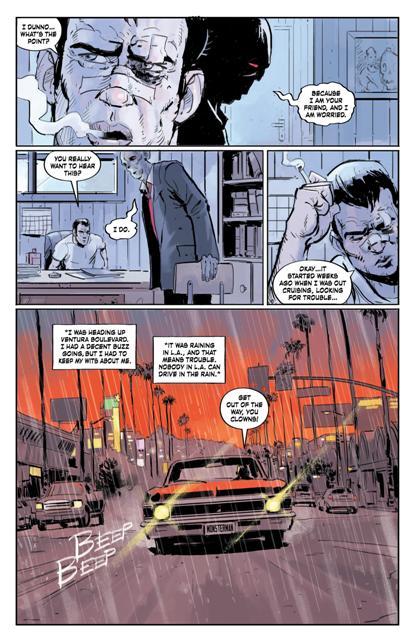 The Big Bleed Out opens with the ghoul Mo’Lock searching the tent towns and alleys of Los Angeles for his friend, the private detective Cal MacDonald. Since The Third Child, Cal has been missing for weeks and the man Mo’Lock finds is dishevelled, dirty and drunk. Cal is never rattled by any of the horrors he faces but something, or someone, has nearly broken him. What follows is a tale of vampires, besotted lovers, missing sewage workers, missing corpses, monster hunters with a penchant for pilgrim era clothing and the beautiful flame haired Victoria.

Steve Niles and his artistic partnership with Christopher Mitten on both 30 Days of Night and Criminal Macabre was a long and fruitful one that reinvigorated both titles, and Mitten and colourist Michelle Madsen left a hard act to follow. Finding a good artist would not be a problem, but finding someone who would have recreate that creative chemistry would be. Five years passed without a Cal MacDonald story so maybe there just wasn’t anybody out there. Then Niles happened to be given a stall at the New York Comic Con right next to Hungarian artist Gyula Németh.

Events within Criminal Macabre have pre-dominantly taken place at night or in dark places. It isn’t a strict rule but it makes sense since monsters traditionally prefer dark places. Nemeth and Niles immediately dispense with that, most of The Big Bleed Out occurring during daylight while Cal anxiously waits for night-time and the opportunity to visit Victoria at her nightclub. Instead of the deep shadows and bright colours previous artists have used, Nemeth uses lighter pastel coloured hues more redolent of the sundrenched LA that Michael Connelly’s Detective Harry Bosch and James Ellroy’s cast inhabit. Their city is grimy, hot and uncomfortable, with the sudden rain bringing chaos rather than relief (sample).

Németh can change the perspective quickly, have you watching the car roll through Los Angeles from the top one frame then see the changing traffic lights high above the tarmac. The atmosphere is that of  cinematic hard-boiled noir rather than the conventional horror story. The cast looks fantastic, revealing strong underground influences with caricatures of everyday people with no two looking the same. Monsters look equally good but have a human quality that can generate sympathy. Unlike previous books the violence is sparse, the consequences displayed rather than the act itself. It generates tension and when it does occur it is short and explosive. It is difficult to impress and understate just how good Nemeth is at this. Go over the pages again and again and you will still find something to appreciate.

The Big Bleed Out is a smart, well paced and smooth story where Niles is at his best, surprising the reader at every turn. There’s a sense of confidence in his writing and it is certainly the best Criminal Macabre story he has ever scripted. Couple that with a fantastic look and it makes for a five star read. Németh is a hidden gem and Niles is letting him shine. The way The Big Bleed Out is told means that it can easily stand apart from the rest of the series, which means you can appreciate it without knowledge of prior events. The creators are already collaborating on new projects, so let’s hope another Criminal Macabre is among them.