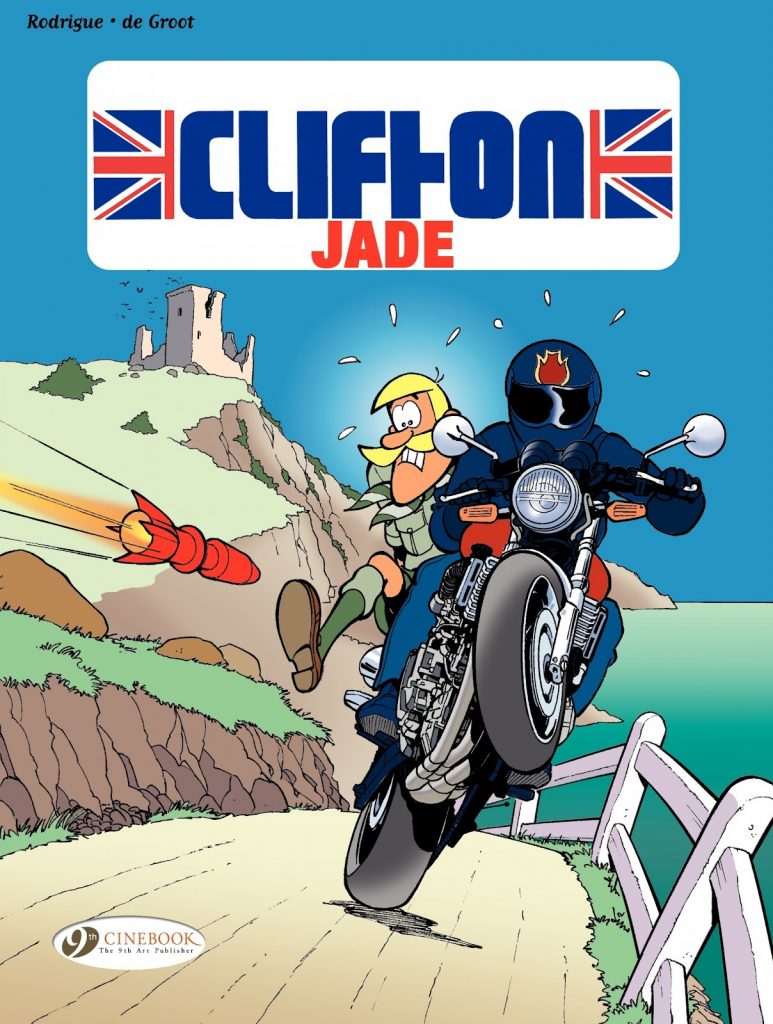 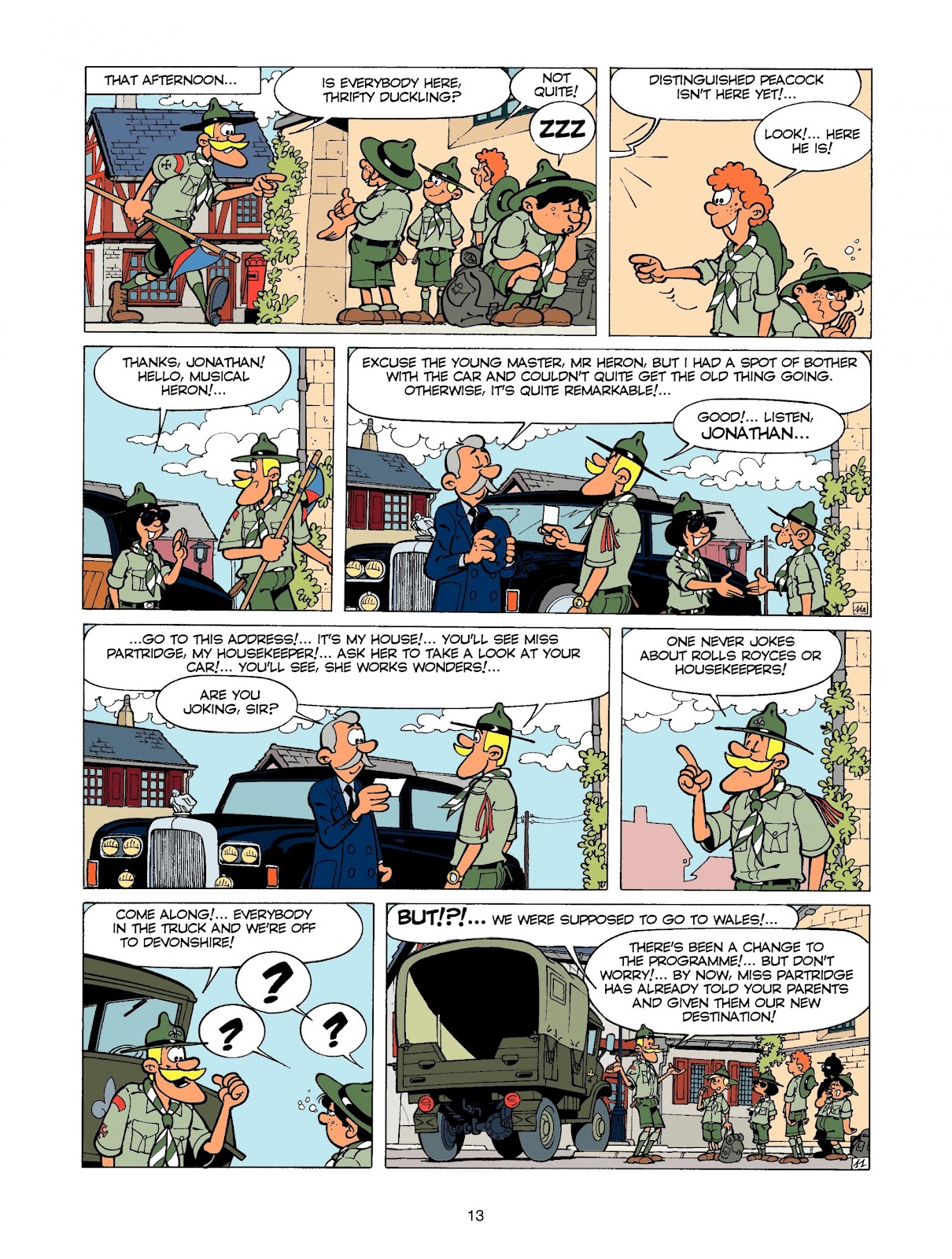 Clifton’s publication over the years can be characterised as fits and starts, and Jade was the first volume of a new revival in 2003, returning experienced scripter Bob De Groot, now accompanied by illustrator Michel Rodrigue. It signalled a fresh start with all the fans’ favourite bits augmented by a stunning new partner for the old war-horse.

In his revived incarnation the balance between satirical comedy, blistering adventure and sinister intrigue is carefully judged. This re-introductory tale begins with pompous, irascible Colonel Sir Harold Wilberforce Clifton and his contentiously fiery, multi-talented housekeeper Mrs. Partridge preparing for a camping trip with the local scouts.

Plans change at the very last minute when a shadowy figure leaves a letter. That enigmatic messenger is painfully unaware that it is being carefully observed by another. The message is in code, but once again la Partridge is up to the task, and Clifton adapts his plans. When the scouts board the lorry the colonel has secured, they learn that they are now heading for Devon.

Arriving at scenic Snooze-on-Pillow, Clifton gets the lads to set up camp but is soon accosted by an unctuous stranger who takes him to meet an old enemy fallen upon ignominious times. During World War II Otto von Kartoffeln was one of Hitler’s greatest assets, but he’s now a feeble wreck in a nursing home bullied by a monster of a nurse. He doesn’t just want to talk over old times, however. The shrunken old remnant wants to share the secret location of a submarine full of Nazi treasure.

All too soon the restless old warrior is hurtling north: dodging bombs and ducking bullets beside an unlikely new partner. Determined on scotching a sinister plot, scuppering a vast submarine base and stopping the rise of the Fourth Reich, Clifton is aware that – as always – there are plots within plots. Amidst the frenetic death-defying action he has to keep one eye on his deadly foes and another on the people claiming to be his allies.

Funny, fast and furiously action-packed, Jade gives our Old Soldier a subtle overhaul and fresh start in a cunningly-conceived adventure romp in the grandly daft Get Smart! and Austin Powers manner. It’s sufficient to astound and delight blockbuster fans whilst supplying a solid line in goofy gags for laughter addicts of every age to enjoy.

Clifton albums can be read individually, but the next album as originally published is Black Moon, translated earlier than Jade. Cinebook follow up with 1983’s Kidnapping, also by De Groot. 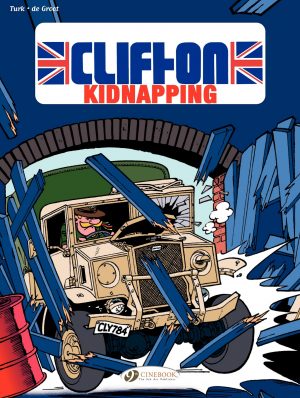 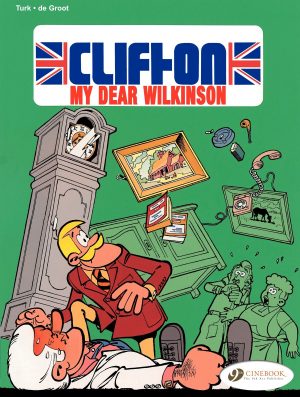 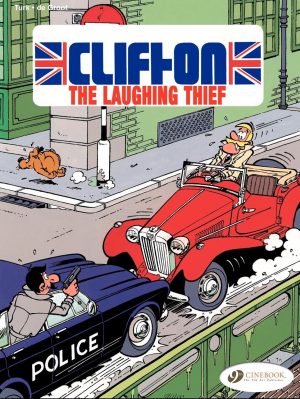 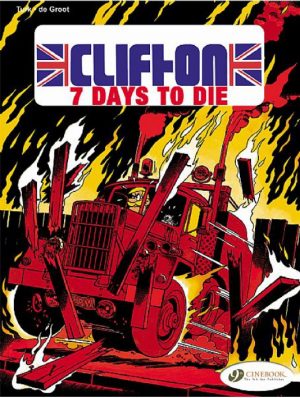