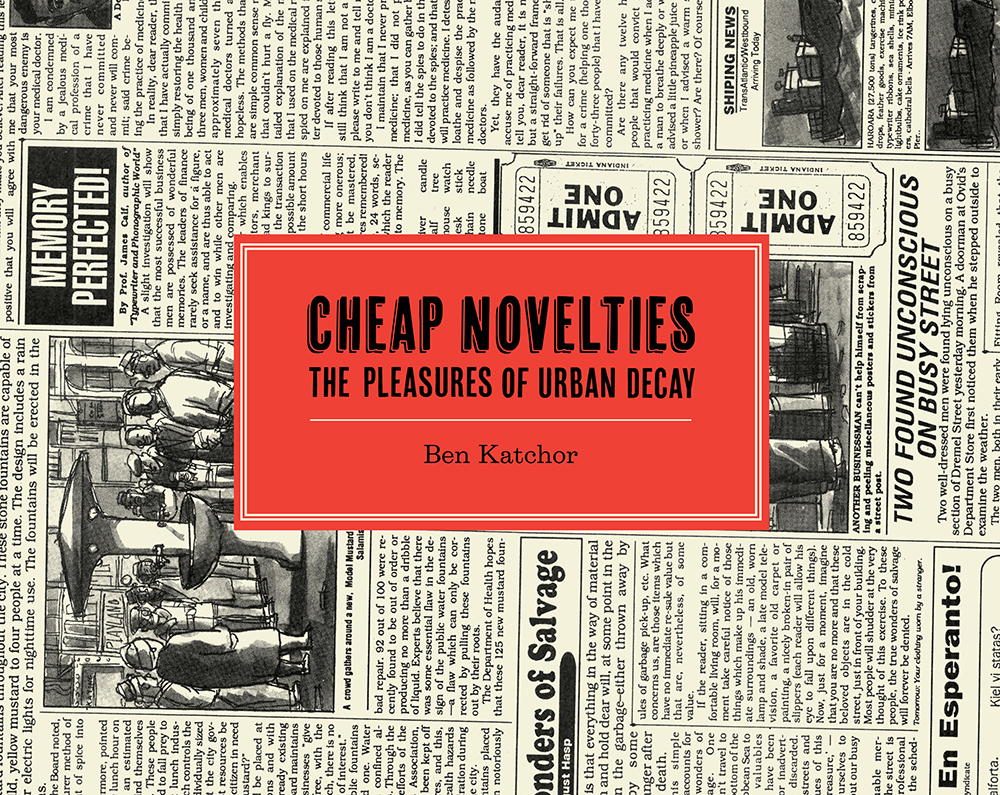 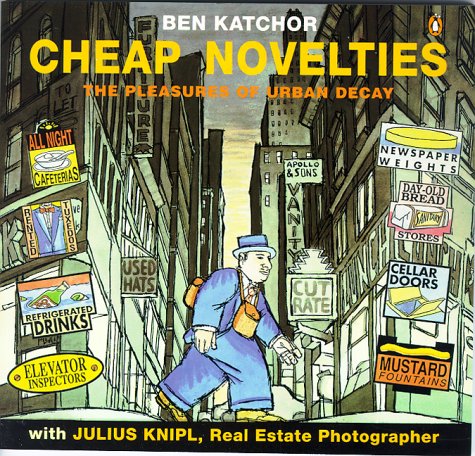 Cheap Novelties is the first collection of strips by Ben Katchor featuring his character Julius Knipl, originally published weekly in The New York Press and five other newspapers in the USA between 1998 and 1991. In these stories Ben Katchor creates what feels like a beautiful elegy to a vanished New York of the 1950s, 60s and 70s, a pre-gentrification era of unique small diners and neighbourhood stores, intricate social rituals, complicated foods, except that every situation he writes and draws in this strip collection is completely imaginary. Julius Knipl is an architectural photographer, whose job is to wander around dilapidated metropolitan locations with his camera, photographing storefronts and other building details for clients whom he prefers not to meet. He takes their orders on the telephone, then goes out into the city to capture their requests. Most of his solitary wanderings take him to dilapidated businesses that are on their last legs, run by men who don’t know when to give up.

The tone of this book is poetic, nostalgic, so powerfully evocative of a lost time that you can almost smell these panels. Katchor’s writing teeters between utterly ridiculous and tenderly affectionate, often both at the same time, as he invents all kinds of spurious goods and services that might have once existed, and explores how they (would have) worked. Katchor’s drawing makes everyone squat and rumpled. No handsome or seductive beautiful people here, his city is a parade of industrious, entrepreneurial men of middle-european ethnicities (there are very few women to be seen in this book) who inhabit the panels in wrinkled pants, sweat-stained hats and lumpy coats. This may not sound like the most alluring premise, but anyone taking the time to engage with a few pages of this book will find themselves completely absorbed in this black and white world and wanting to follow Knipl anywhere he goes.

Each of these strips is a one-page, self contained idea, until the last eighteen page story drawn for this collection, called ‘The Cheap Merchandise District’. This is a longer, single narrative that enables Katchor to explore this nostalgic place of failed, marginal or abandoned businesses, and extend his observations into a more involved narrative with a longer payoff.

The first edition of Cheap Novelties was edited by Art Spiegelman and marketed as a ‘raw one-shot’; it was the only volume to bear that distinction. The other two Julius Knipl collections, Julius Knipl Real Estate Photographer (1996), and The Beauty Supply District (2000) are all assembled by Katchor and from a different publisher. A new edition of Cheap Novelties was published in 2016, slightly revised and reformatted in a bigger, redesigned hardcover. 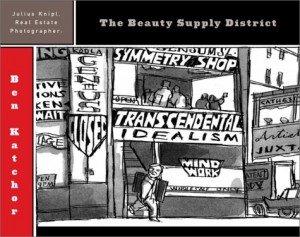