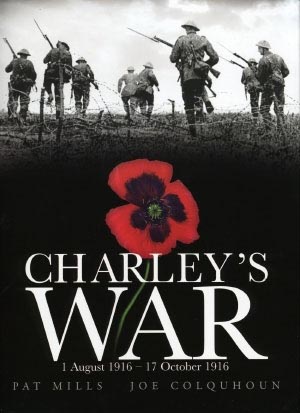 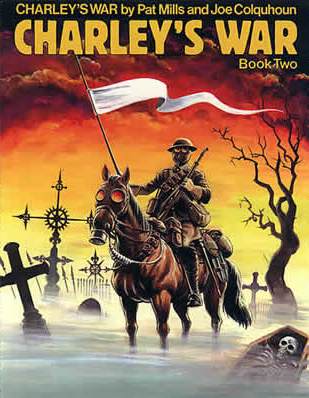 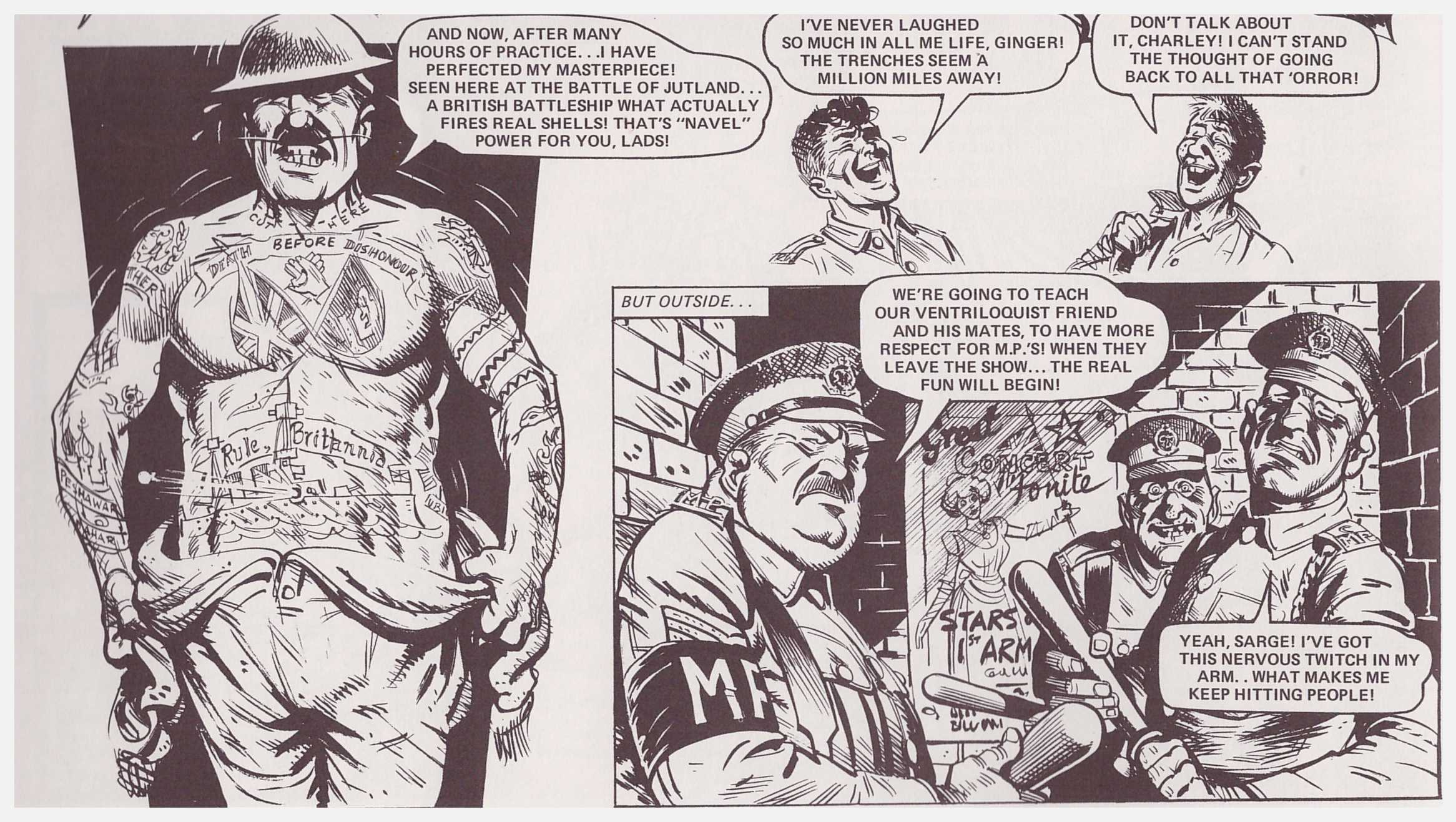 Artist Joe Colquhoun reportedly spent an entire week drawing each three and later four page episode of Charley’s War, a pace that wasn’t commercially viable. He’s fantastic at designing people, and delivering character without resorting to exaggeration. He supplies unique depictions, not one stock face with adornments providing the distinguishing aspects. Even with their caps on Charley can’t be mistaken for his mate Ginger, and neither could be taken for Titch, who was able to enlist after the recruiters stood him on a box to meet the army height requirements.

Pat Mills fed Colquhoun an assembly line of memorable characters, and he responded with equally memorable portraits. Sgt Tozer with his perfectly waxed moustache rages at his charges, yet does so attempting to ensure they learn quickly and stay alive. The Weeper has been permanently affected by exposure to mustard gas. The bespectacled Smith-70 has a natural affinity with machinery, and Charley’s brother in-law Oiley, removed from his wheeler-dealing comfort zone, is a perpetual whining presence.

The opening sequence picks up the day after volume one ended, and deals with the frequent occurrence of British troops on the Somme in 1916 being bombarded by misdirected artillery fire from behind their own lines. Writer Pat Mills’ scabrous views of the officer class are personified by the arrogant and callous Lieutenant Snell, a man prepared to delay calling a halt to the barrage because that would interrupt his tea.

Mills’ commitment to portraying the war as it was for ordinary soldiers was revolutionary for British war comics, and denies expectations of readers used to a more gung-ho approach. Tragic circumstances are never more than a step away in Charley’s War, a sentiment underlined here. To modern readers the punishments inflicted by army procedures are as appalling as the senseless deaths. Over 300 British soldiers were executed by their own side in World War I, most paying the price for desertion, and those not murdered endured what would now be considered torture, horrifyingly portrayed by Colquhoun.

Much of this volume concerns tanks, which saw their first widespread use on the Somme battlefields of 1916. The initial appearance of what was then considered a weapon of mass destruction is delivered along with the wonder and awe of the ordinary solider seeing them for the first time. The primitive look these vehicles now have enables some wonderful art from Colquhoun, and Mills cites a spectacular sequence where a tank crashes through a church housing a field gun as one of his favourites from the series.

In addition to informative notes from Pat Mills, and Steve White’s introductory article about the use of tanks in World War I, there’s an appreciation of Charley’s War from Garth Ennis. The first half of this hardbound volume originally saw print in book form in 1986 in a Titan paperback edition, and the story continues in October 17th 1916-21st February 1917.