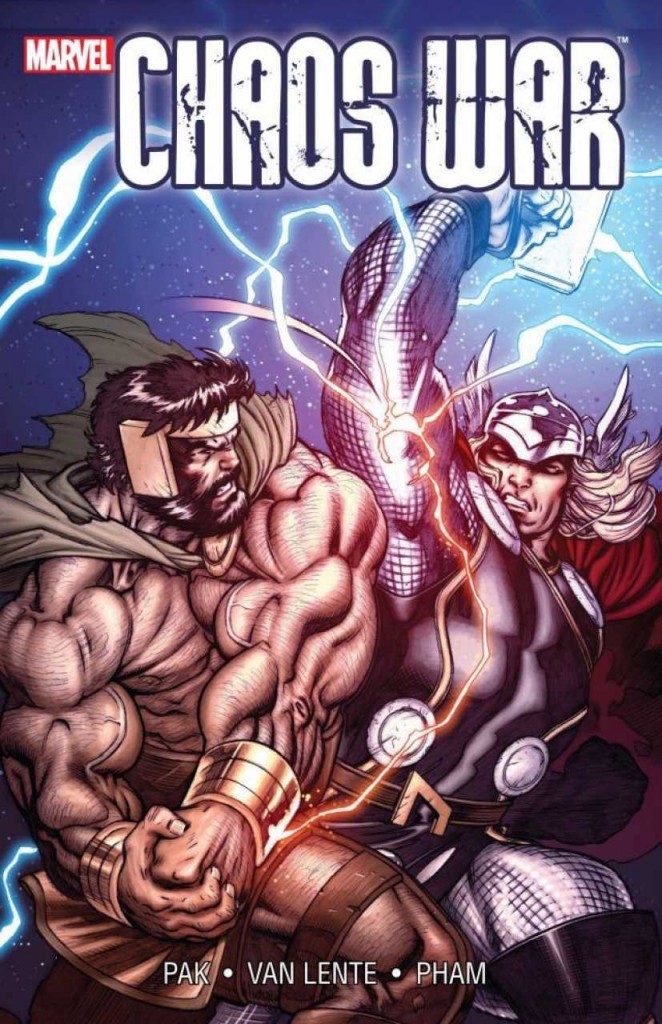 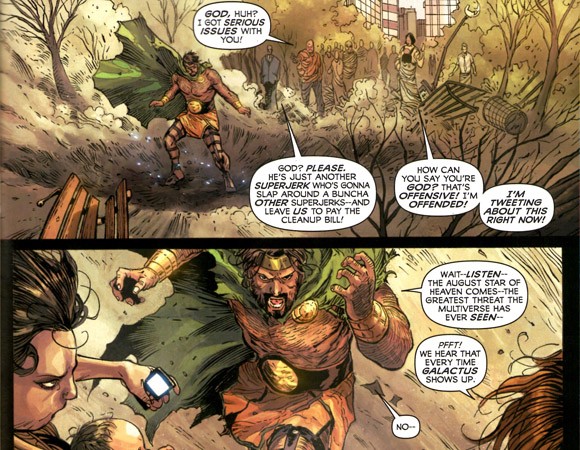 Greg Pak and Fred Van Lente’s Incredible Hercules series was consistently entertaining, building to a surprise conclusion in the final volume, with an undercurrent not always obvious of transforming Hercules. The weakest volume was their Secret Invasion tie-in, and that was where the writers made considerable use of Amatsu-Mikaboshi, a Japanese legend said to exist in the void that preceded life. Chaos War is the result of his decision that this state of affairs was preferable to a teeming universe, as he settles into the name of King Chaos. The formerly among the missing, presumed dead, Hercules has gathered enough power to thwart King Chaos and delivers a small portion to many dozens of Earth’s heroes as the population awaken insane and raging from sleep.

Pak and Van Lente deliver a decent method of instantly disabling Hercules’ superhero army, leaving only the Gods among them unaffected, along with his former companion Amadeus Cho who’s inherited the powers of some Gods. Initially pleased at the thought of billions due to populate the underworld, the assorted deities corralling the dead soon discover their realms too are designated for extinction.

A problem with crossover events is that they’re so sprawling the collected versions rarely deliver a linear read, and occasionally not even a coherent one unless consumed with several other books. Chaos War avoids this by designating the troubles unleashed by the Chaos King to other collections, while this concentrates on a small squad assembled by Hercules to deal with the root of the problem. Those selected demonstrate the inventive qualities of the writers, but thereafter some all but disappear, and despite all the blood and thunder, the series rather limps to an end. Yes, there are a couple of inventive elements along the way, such as an interesting use of a more enlightened Hercules with near infinite power, but when the conclusion is, in effect, a big fist fight it induces a sigh of resigned disappointment. It’s equally an ending of sorts for Amadeus Cho, barely seen since, yet for a few years one of Marvel’s most endearing supporting characters.

The series also serves to return assorted heroes from the dead, in effect admitting mistakes were made. Maybe this time they’ll not be pawns when a writer lacks inspiration for their shock ending.

Artist Khoi Pham is in his element. A giant cosmic battle gives him the opportunity to cut loose and supply wall to wall action in spectacular fashion while simultaneously avoiding the quieter character moments at which he’s not quite as adept.

Chaos War is the bigger picture, but for those wanting to delve deeper there are other collections tying in featuring the Avengers, the Hulks and the X-Men.