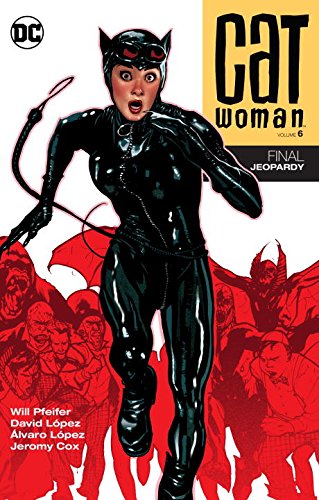 Final Jeopardy combines the three Catwoman collections previously issued as Catwoman Dies, Crime Pays, and The Long Road Home, tacking on a later story written by Tony Bedard. The remainder of the writing is all the work of Will Pfeifer.

Pfeifer transformed the series from one casting Selina Kyle as the protector of Gotham’s East End to one where she’s pitted against the villains of the wider DC universe, and this shift in direction isn’t the series killer it might be assumed. Pfeifer constructs tense plots with novel situations, but it possibly won’t sit well with those who preferred the earlier approach. It’s compounded by incorporating intrusive crossovers, primarily Amazons Attack, which is self-explanatory, and Salvation Run, in which DC’s villains were rounded up and transported to a prison planet. Pfeifer’s off form with the first, but works well with the constraints of the second.

Almost the entire book is drawn by David López. His Catwoman falls within the bounds of acceptable costumed superhero women, attractive without ever sinking back to the fetish wear clothes peg she was in the 1990s, and his page designs are excellent. An early sequence with Catwoman operating in Gotham during rainfall is notable for transforming poor weather into visual gold, and his more open style works well with the overt superhero material. He has a great sense of visual dynamics and Catwoman is well placed within the extremely diverse environments in which she’s called to operate.

Catwoman may be more explicitly inserted into the wider DC universe, but Pfeifer doesn’t short change on character moments, particularly during an early sequence in which Catwoman is coming off second best by some distance as TV footage of it is screened throughout Gotham. Later circumstances also dictate that Catwoman has to revert to her earlier criminal occupation, having to build anew from scratch. It makes for an entertaining interlude, but that it’s generated by someone jerking Catwoman’s strings never convinces. Pfeifer is better with the dialogue “You all know who I am and what I can do. Let’s make this nice and easy, okay guys? Then everyone gets to go home and no-one has to make a stop at Gotham Memorial.”

Running through a significant portion of this book is a very good plot of Selina being responsible for someone else. It’s sometimes in the background, sometimes dealt with directly, but informs much of what she does, and leads to Pfeifer’s best story, which examines how far Selina Kyle is Catwoman as she’s compromised. Disappointingly it’s a final hurrah for the supporting cast used since the start of the series. This is clumsy, as plot threads regarding Holly are left dangling. However preoccupied Selina Kyle may be with other matters, it doesn’t ring true that she’d just abandon Holly without making some attempt to locate her. There is no real replacement supporting cast. Pfeifer’s Catwoman, though, like the cats she represents, is primarily a loner, although a surprise return for Slam Bradley is welcome and works.

Tony Bedard’s coda is a mixed blessing touching on the events of No Easy Way Down, first restoring a forgotten character sympathetically, and on the final page undermining what he’s done with trite melodrama. Four artists contribute, all okay, with Ibraim Roberson handling the most pages. As well as the story by Bedard and various artists there are pages in the back of the book where Adam Hughes discusses the covers he produced for the original comics, which is welcome.