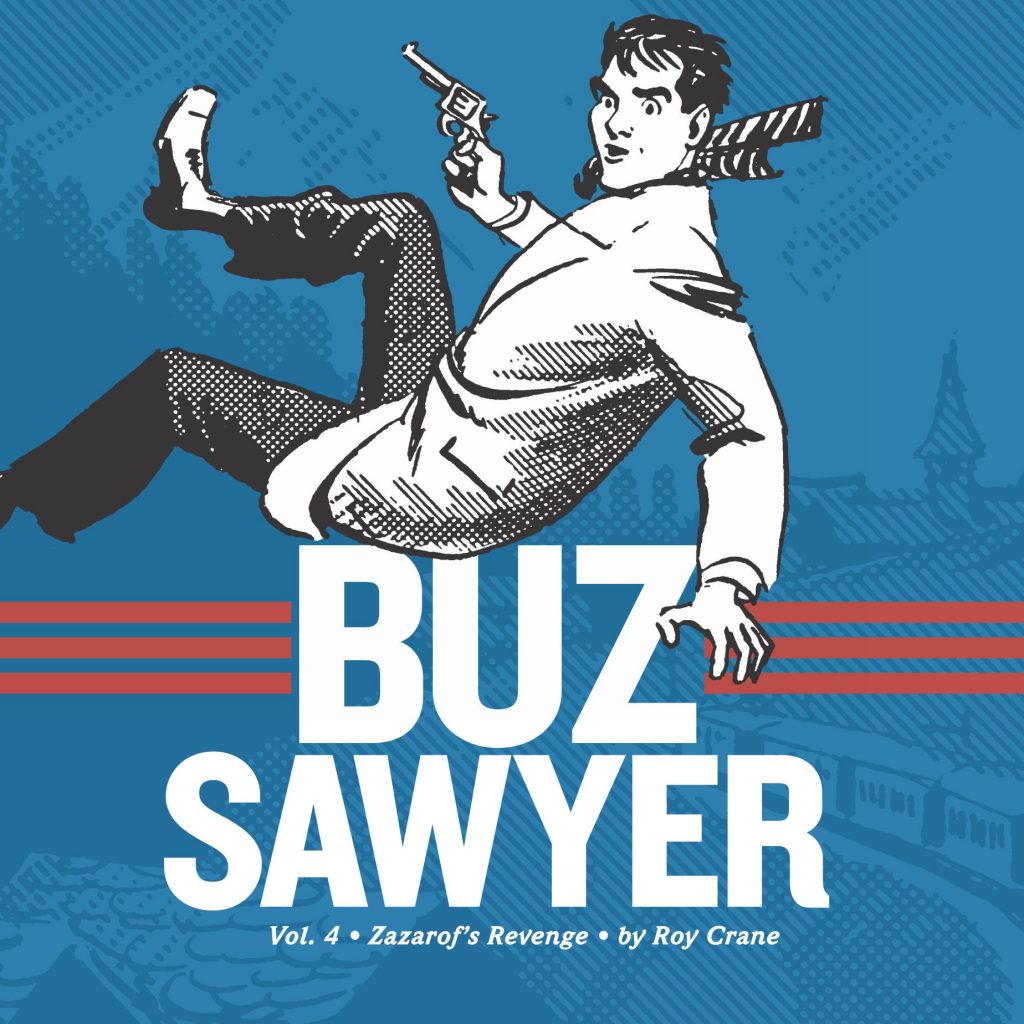 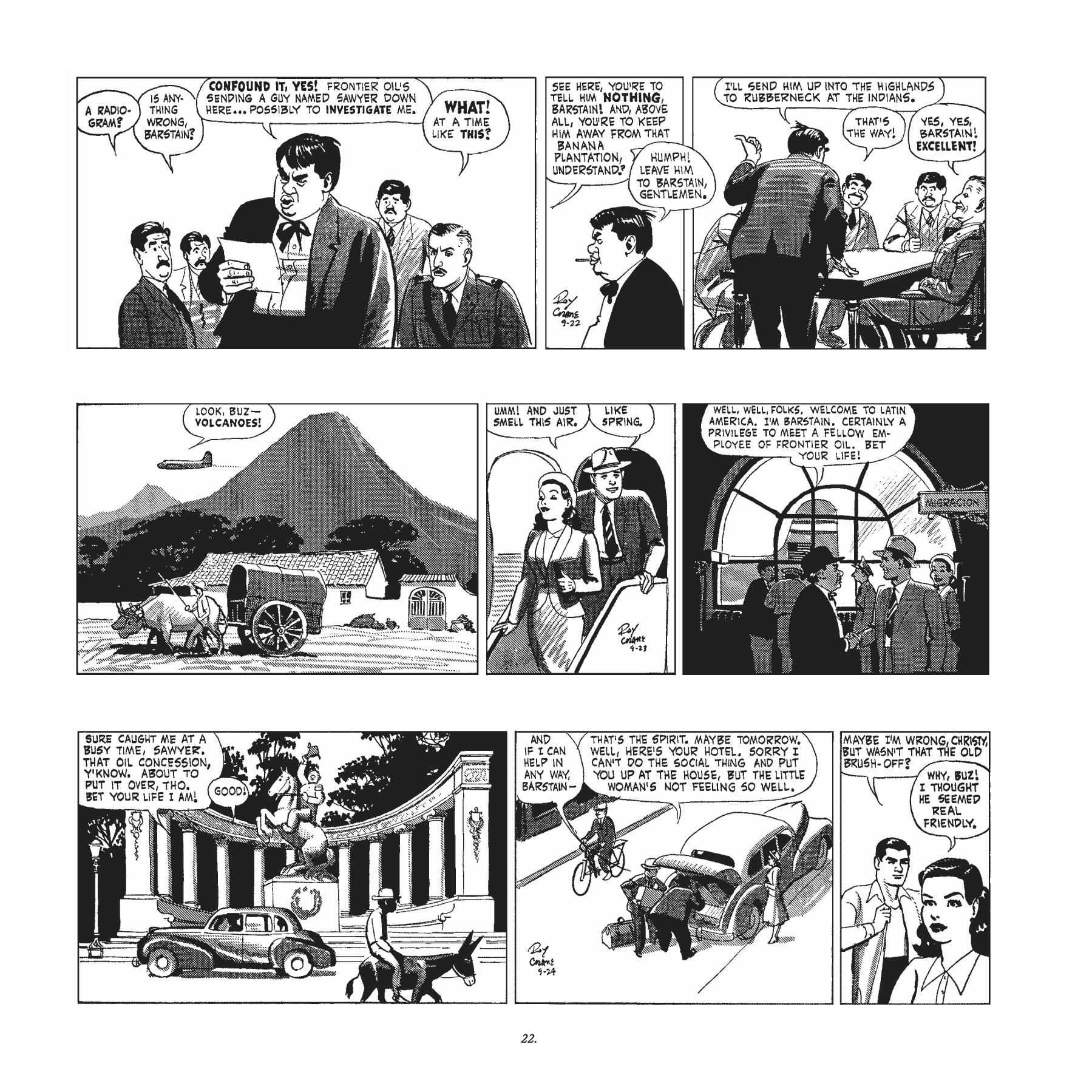 While considered a serialised adventure strip, key to Buz Sawyer’s success was Roy Crane switching the tone. The mid-1947 newspaper continuity opening the previous Typhoons and Honeymoons was what we’d now consider romcom, then a genre at its height in the movies, and as introduced in Sultry’s Tiger, Crane enjoyed screwball comedy featuring exotic creatures. The chimpanzee Christy Sawyer brought back from Africa occupies several weeks of antics in the mid-1949 strips opening this collection, and there’s a reprise with a parrot during 1950. These aren’t the strips for which Buz Sawyer is remembered.

Buz’s first real mission takes him back to Central America to investigate why an oil deal isn’t progressing as expected, and once back in the USA there’s a prolonged amnesiac scene. Crane and writing collaborator Edwin Granberry had briefly explored this path before, but now expand the idea successfully, maintaining the suspense for two months during the original publication. Suspense is consistently well achieved, with Buz or Christy placed in impossible situations, seemingly with no escape, Crane and Granberry capable of milking those predicaments for weeks at a time, yet the collection shows how elegantly they managed it.

There’s far more in the way of local colour and background scenery when compared with Buz’s previous Central American visits, indicating Crane’s greater confidence in his art assistant Hank Schlensker. This sequence is packed with scenes of busy villages, lush jungle, opulent villas and the old fashioned cars and trains in operation at the time, and still captivates. The action sequences draw on cinema for inspiration, and there’s a superbly choreographed chase on a train early on. Scenes of showgirls, several days worth of the alluring Christy in a bikini, and the methods used by Diana Chase to seduce Buz were considered racy for the era, and generated letters of complaint from conservative readers. The expansive scenery continues throughout Buz’s visits to assorted European nations.

Six years into the strip Crane and Granberry were already experts at keeping the tensions high and varying the stories. Buz may have visited Central America previously, but this time he’s caught up in an actual revolution rather than the threat of one. A trip behind the Iron Curtain involves a suspenseful cave sequence, there’s a comedy interlude on a deserted island, and a fantastic, imaginative trap in Alaska. At times some elements introduced to the plot seem gratuitous, such as the use of twins, but logic is always applied, and the plots now run considerably shorter than previously, rarely extending beyond three months of continuity.

Certain aspects of Zazarof’s Revenge are mired in their times. The clichés of the scheming Diana Chase and the newly minted Taffy Fawn won’t go down well in the 21st century, and the Cold War had begun by then. It’s noted in passing with an over the top speech about freedom, while Crane, always a fan of the Navy, slips in a couple of career suggestion plugs for them. However, Crane can surprise, and Buz takes a stand against American companies meddling in the politics of Central American nations, while in the real world there was hardly a time during the 20th century when they didn’t.

We don’t meet Zazarof until November 1951 strips, a saboteur threatening Frontier Oil’s Swiss interests, the twist being there’s no known picture of him. In his own territory he’s as formidable an opponent as Buz has faced in the ten years of continuity. Superb art and creative scripts ensure this is another excellent selection of adventure strips constructed to stand the test of time.