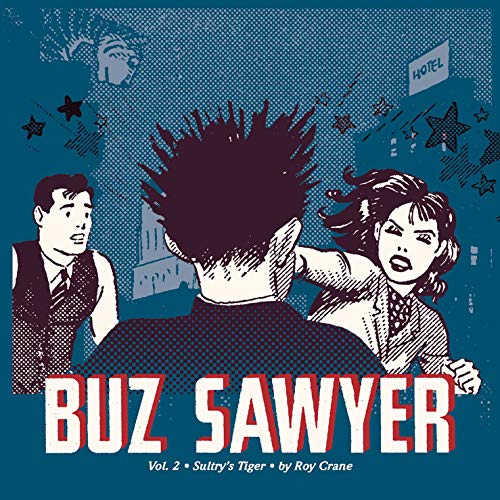 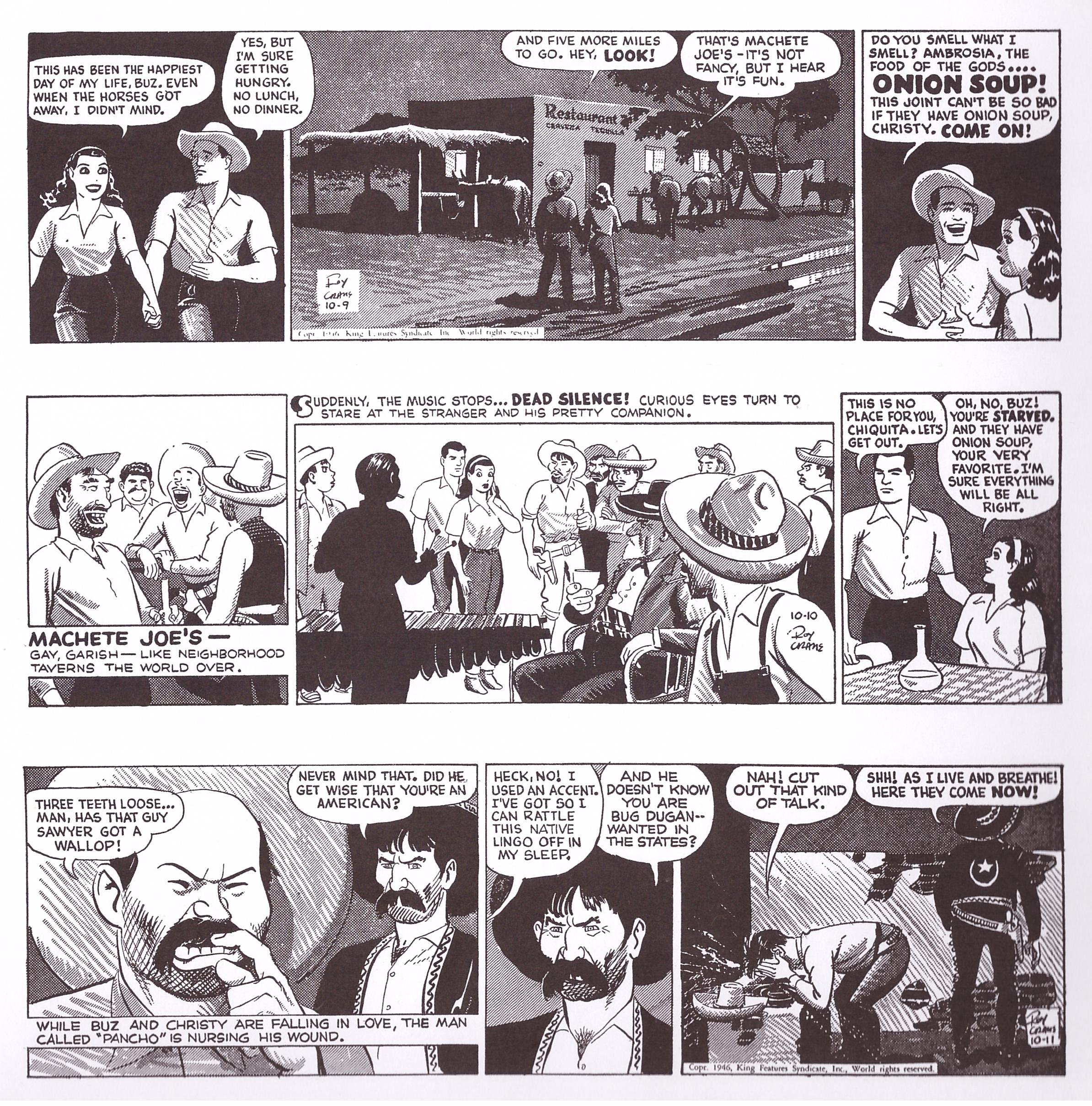 Having introduced his dashing adventure hero Buz Sawyer as a wartime navy pilot, the impression given is that in late 1945 Roy Crane wasn’t entirely sure how to transfer his hero’s skills to peacetime. He has another character mention how many pilots are now looking for commercial flying work, and six months of strip continuity opening this book is really just soap opera. It’s extremely well drawn soap opera, but soap opera nonetheless as we catch up with Buz’s convoluted love life. Christy Jameson, Sultry, and Tot Winter were all wooed in War in the Pacific, and all return during this sequence.

Crane’s artistic reputation is founded on illustrative excellence rather than graphic innovation, but in February 1946 he crafted an astonishing dramatic moment and to represent it that day’s strip was drawn for vertical rather than horizontal publication. It represents the point at which the strip moves back, if not yet into adventure, then at least to mystery. By April 1946 Buz had sorted out some personal affairs remaining very cheerful all things considered, and was ready to take up his new position as protector and mission specialist for a powerful man. Better still he was now reunited with his wartime pal and mechanic Rosco Sweeney. It also marked a new start for Crane, now working again with an assistant, Hank Schlensker, who began in 1946 inking Crane’s pencils and occasionally providing backgrounds. As noted in Jeet Heer’s informative introduction, the pair had a fractious relationship over the years, but there’s no doubting their effective artistic partnership. Edwin Granberry was already helping Crane with the plots and dialogue.

Buz and Rosco travel the world throughout the remainder of 1946 and 1947, and the research and imagination applied to the locations and their conditions by Crane and Granberry results in consistently thrilling scenarios. A stranded Buz watches his plane drift away on an ice floe in Greenland, he plays a game of cat and mouse with a Central American land owner, and is abducted to Africa. The reasoning behind that is a little fuzzy, but otherwise the plots are well constructed to prolong the danger until the possibilities of the location have been exhausted. Toward the end of the book there are of instances of behaviour that would be considered unacceptable today. However, it can also be asked whether Buz blacking himself with cork to disguise himself as African is a natural method of escape given his circumstances in the final story. He’s doing it to avoid attention rather than as a sideshow act. A nice aspect of the plots is that they all feature a little twist somewhere that’s not essential for the story, but supply an extra surprise.

By the conclusion of Sultry’s Tiger Buz’s post-wartime career has been well and truly established. There are undeniable thematic similarities with Milton Canniff’s Steve Canyon, also featuring a former wartime pilot turned flying troubleshooter, but that only launched halfway through the Crane’s material reprinted here. His work from 1948 and 1949 is found in Typhoons and Honeymoons.