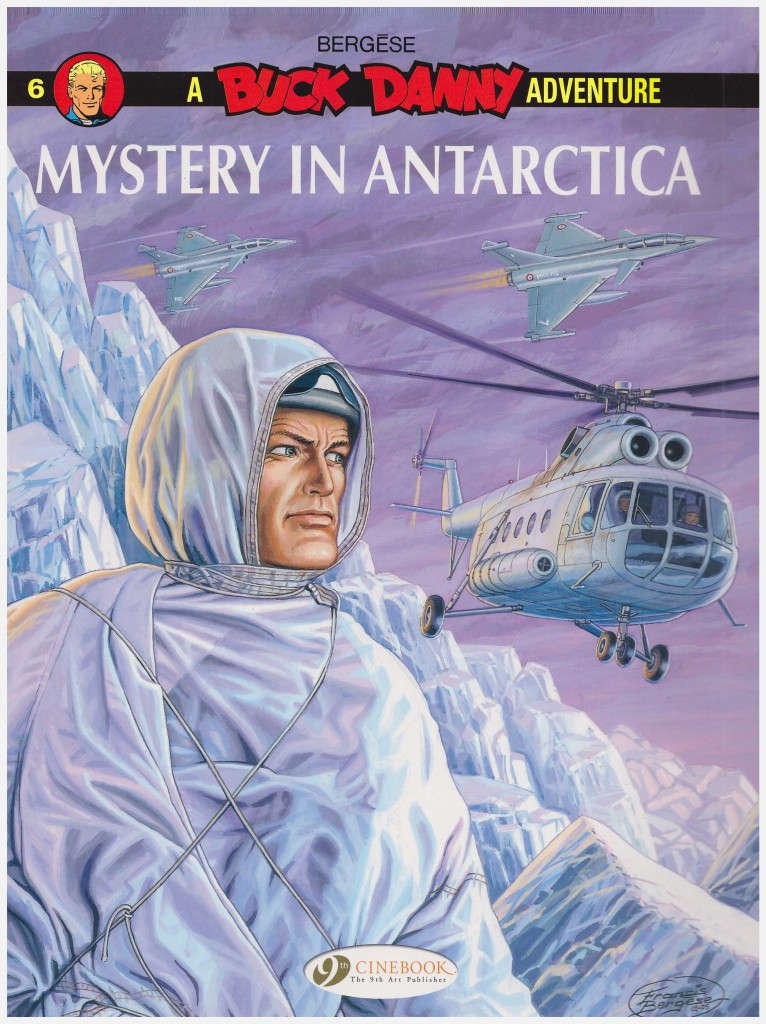 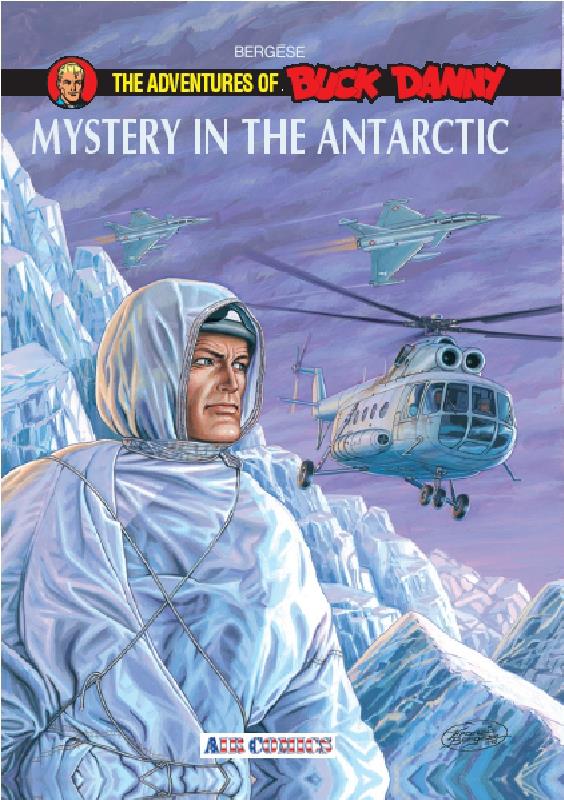 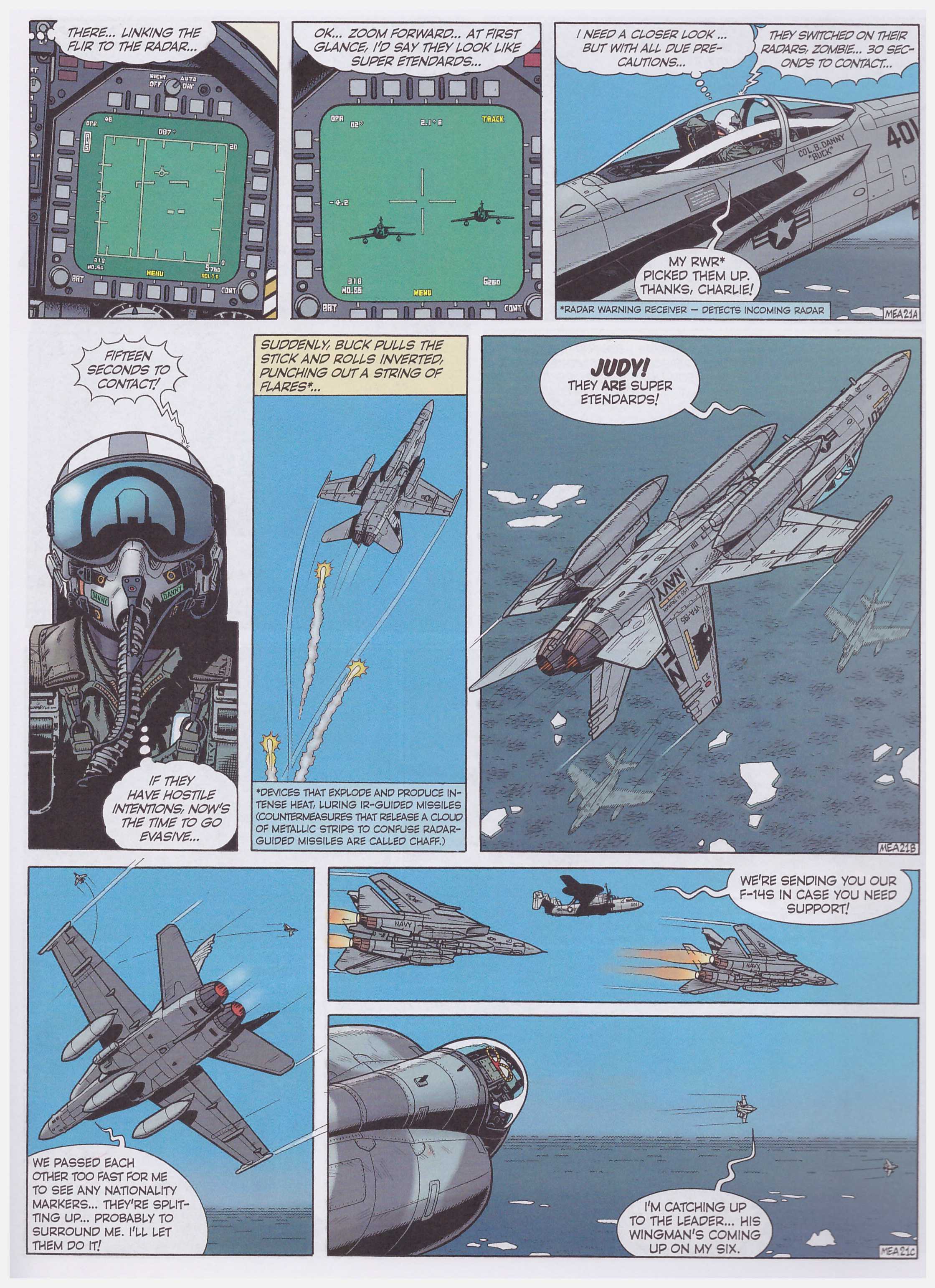 Francis Bergèse’s habit of dating the first and last pages of his albums shows Mystery in Antarctica took him over eighteen months to complete from his starting date in June 2003, the time visible in the exquisitely detailed renditions of planes, ships and other vehicles. There are plenty of these given the unique and specialised nature of the location.

The reason US Air Force pilot Buck Danny is heading toward Antarctica as the book opens is that several French jets were seen flying over the area. When asked officially the French claimed the carrier housing those jets was in an area too far away for them to reach Antarctica, and the supposition is that either lies are being told, or someone is contravening agreed protocols. As Buck explains “Antarctica is an international and demilitarised continent. All the bases on it are strictly scientific in nature. Therefore, it would be out of the question to land anything other than service aircraft there.” A preliminary investigation reveals a body lying among the penguins on an iceflow, and a freighter heading away from the continent.

These mysteries sustain the plot until the halfway point as Buck and the Americans locate allies, fly a succession of reconnaissance missions and make a disturbing discovery. From then it’s pretty much Buck on his own in one location and his comrades in another. The feature has been sustained for decades on its superb depiction of aeronautics, and this splitting of narratives permits that to continue. While aware his work will eventually be published as an album, Bergèse’s first duty is satisfying the readers of the half pages during their original serialisation in Spirou, and reading the books it’s astonishing how disciplined he is in serving that audience. It’s a rare half page that doesn’t feature some form of transport while also progressing the plot.

Buck Danny is an awkward series in places. It’s exceptionally well researched, but the compulsion for precision leads to large blocks of text, and additional blocks provide explanations that aren’t always needed (the exact layout of a base and its personnel for one). This exposition slows the plot, but Mystery in Antarctica picks up the pace in the final pages. The mystery is revealed, there’s a finely plotted battle sequence and, as ever, Buck survives the danger to pull everything together. Bergèse ties up a couple of loose ends, provides a final joke and it’s over and out.

Unlike some other series from Cinebook Buck Danny is aimed at a younger audience, and Mystery in Antarctica never transcends this. It doesn’t talk down, but the cast are restricted to a surface characterisation, the jokes are relatively feeble, and elements of the plot are just too convenient. Within those limitations, however, it’s good, and should thrill the intended readership.

Chronologically this is the 51st Buck Danny adventure, and in addition to the Cinebook translation there’s another English version published in the USA by Air Comics.