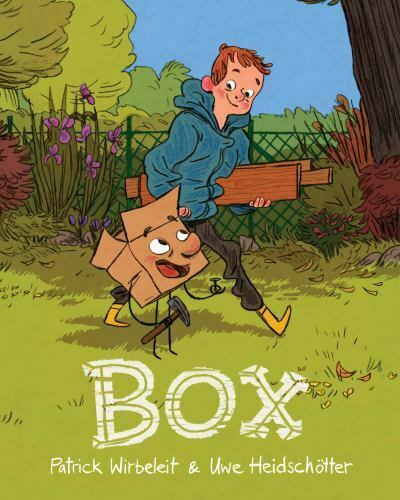 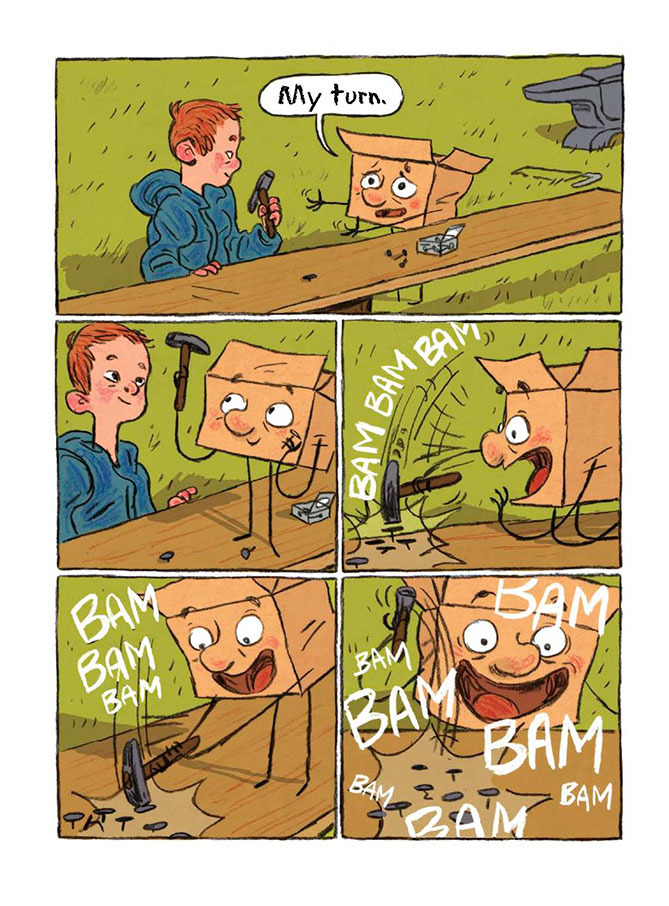 Box was originally released in Germany in 2014 as Kiste, winning a bunch of prestigious awards across the globe. It’s the brainchild of veteran author and illustrator Patrick Wirbeleit, who has notched up more than fifty books since he migrated from freelance artist to comics creator in 2001. His collaborator on this slice of inspirational whimsy is illustrator, character designer and animation director Uwe Heidschötter, whose past work includes The Little Boy and the Beast; The Gruffalo’s Child and Kahlil Gibran’s The Prophet.

The tale is a charming, heartwarming and enticing fable in short titled chapters, which begins when young Matthew Wheeler returns home to find a large cardboard box by the bin outside his house. He’s an imaginative, inventive kid who loves making stuff, but well-brought up too, so he asks permission before co-opting the container for the space station he’s currently building. That doesn’t stop him slightly freaking out when the package starts offering advice and some expert technical aid.

It transpires the battered cardboard used to be a sorcerer’s toolbox, holding an infinitude of gear in a seemingly empty interior, and intensely frustrated because his owner never made anything physical, instead only messing about with spells. Rapidly adapting, Matthew starts a new project at Box’s suggestion, but ‘The See-Saw’ is a bit of a bodge and proves the container might have the tools, but is sorely lacking in knowhow.

The talking toolkit’s next idea is ‘The What-Happens-Then Machine’, affording opportunity to share its origins whilst also warning that most humans who see its true nature freeze and forget quite quickly. When Mum and Dad end up utterly spellbound, it transpires that only the sorcerer can unlock their paralysis, so boy and Box immediately head for ‘The House in the Forest’ and a rendezvous with the terrible unknown.

After enduring nature at its worst and braving the polite-but-firm outer deterrents of the solitary mage, they eventually enter his lonely house, only to discover ‘Torquist Binklestunk’ is missing and a giant snake is now in residence.

Thus begins a desperate race to restore the magician and find a cure for Mum and Dad, with Matthew’s budding skills crucial in crafting a solution. When he succeeds and goes home to magically effect ‘The Awakening’, he successfully hides just how long his parents have been switched off.

Short, sweet, and amazingly appetising, Box is certain to make many fans and inspire kids to build their own worlds of wonder.