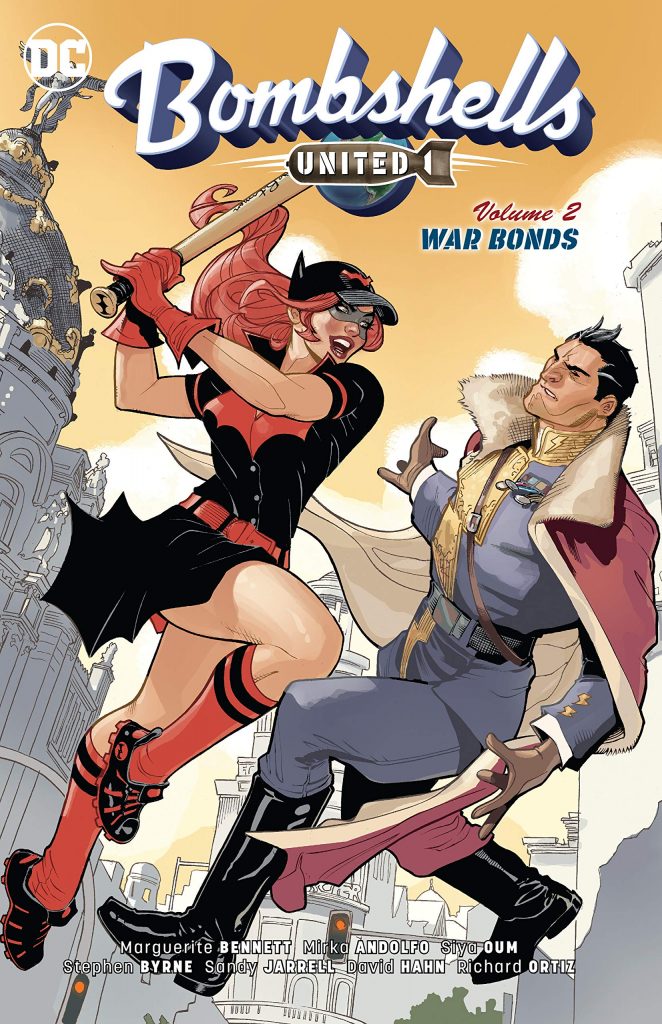 It’s been a long time since we’ve seen Batwoman Kathy Kane in the Bombshells series other than in passing. She’s not had a starring role since Queens, and a good opening sequence reunites her with Renee Montoya, fermenting revolution in Spain, and pits her against that country’s ruler in this universe: Black Adam. While other characters are seen, one definitive in the finale, it’s Batwoman’s story and narrative voice that occupies almost all of War Bonds. It’s comprehensive, sympathetic and a step back up to established standards after the somewhat disappointing American Soil.

As Bombshells has progressed, more and more artists have been employed, and while none have been poor and it’s not harmed the feature, it’s also nice to see some greater consistency rather than a new artist every ten pages. Richard Ortiz produces some beautifully designed pages to reintroduce Batwoman, and Mirka Andolfo (sample spread) runs with that decorative quality and draws more pages than any other artist. Siya Oum is again back to her more refined style, and David Hahn good on a short sequence, leaving Stephen Byrne as the sore thumb. The cartooning is good, but Byrne also colours his own work, and an excess of green may cement the animated look, but it’s not in harmony with the palette established by J. Nanjan for every other chapter. As he did in the previous book, Sandy Jarrell draws the final chapter very nicely. That’s a melodramatic mix of triumph and tragedy that works well due to Jarrell’s sympathetic interpretation.

An enjoyable aspect of Bombshells is how Bennett manages to take DC female characters and twist them slightly to fit her 1940s. The relatively obscure Dawnstar was nicely reimagined in American Soil, and this time it’s the turn of Talia Al Ghul, introduced as guardian of an ancient mystical city. That’s now connected with the legend of Shazam, here tragically reinterpreted. A storytelling device Bennett frequently employs to good effect is interrupting present day events with dips back into the past that explain and inform them while setting a course for the cast of the 1940s. Black Adam is connected with the idea of the Lazarus Pits that revive R’as Al Ghul, and has a specific ages old interest in searching them out. The basic plot is a variation on tale produced for the mainstream DC universe, but Bennett infuses it with a stronger emotional mood and musings about life and death for an effective story.

The final Bombshells graphic novel heads back to Gotham in Taps.