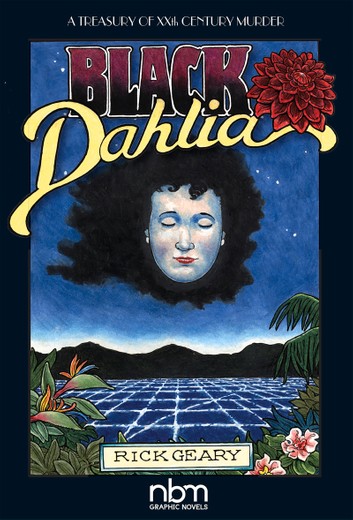 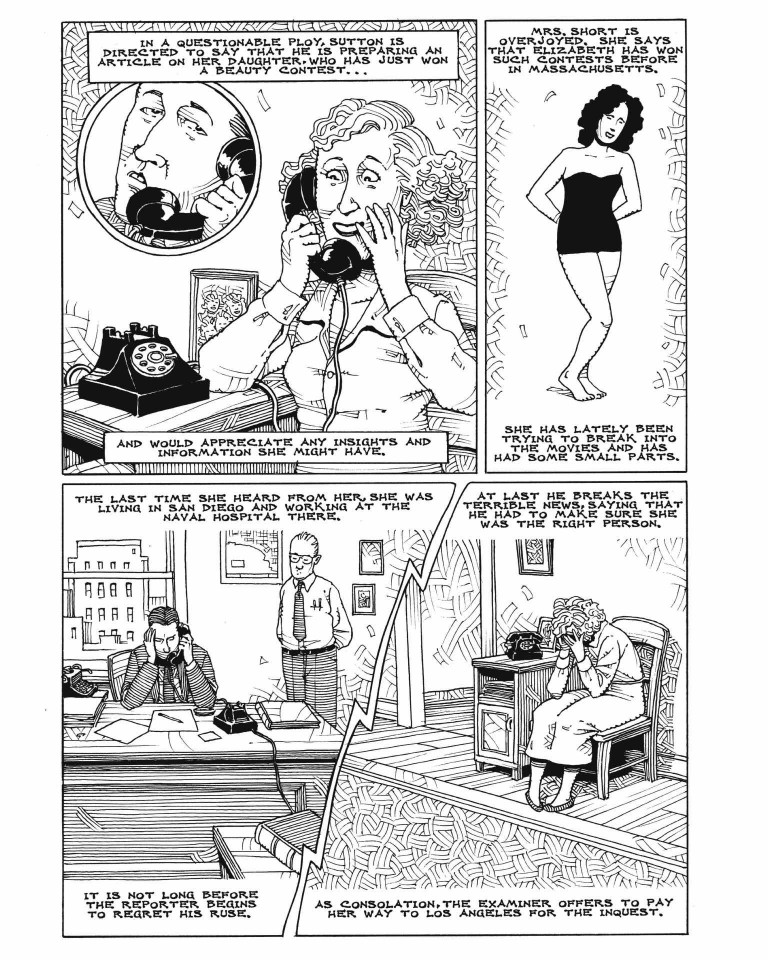 After thirty years of Rick Geary’s Treasury of Murder series there’s no sign, in this fifteenth volume, of the quality slipping.

Geary has developed what criminologists would call a modus operandi, or MO. He combines meticulous research, objective reporting, and a keen eye for fascinating details. all illustrated in his signature blend of cartooning, woodcut, and schematic diagram. A single page has drips of blood on the ground, a faded footprint, a muddy tyre track, a cement sack that may have held body parts, and the body itself – covered by a reporter with pages from his own newspaper. Thereafter there are locations of wounds, a montage of coroners’ photographs, a contemporary artist’s impression of the victim, hands wielding a club then a knife… yet Geary always downplays the gruesome, and undercuts the gore with his visual charm.

These details removed from the crime itself are turned from violence to evidence. This series, along with his biography of FBI lynchpin J. Edgar Hoover, comprise a loose history of detection – compelling to even those with little prior interest in the subject. A fascinating detail here, for example, is that the police withhold key details from press reports, to help them distinguish true confessions from false.

As with the best fictional detective stories, the crime also shines a light on society, in this case Hollywood in its heyday. Part one ends (pictured) with the identification of the victim as Elizabeth ‘Beth’ Short. Part two then changes gear and style, to give us her backstory: some minor modelling jobs, and a desire to escape the effects of the great depression. She may not have acting ability, but she has looks and charm, and knows how to use them. She takes a job on a military base and dates a series of officers without ever (as Geary quotes it) ‘going all the way’. It’s surely a common story, but Geary brings it to life, with his expressive artwork and eye for details. In a ‘snapshot’ of smiling servicemen, he makes each an individual – his gentle caricaturing also adding some light relief to this dark story. Geary’s distinctive style can disguise his versatility – he’s as adept at the details of Beth’s life (the Art Deco styles, the parties, and audition waiting rooms) as at the forensic details of her death. It’s hard to imagine who could juggle these elements better.

Short’s distinctive hair and signature outfits, earn her the nickname Black Dahlia, playing on contemporary film noir The Blue Dahlia, and foreshadowing the descending darkness. Papers found after her death capture the pathos of her efforts to secure a husband – unsent letters to soldiers abroad, and polite replies suggesting they ‘are not quite right for each other’. The clubs she’s frequenting bring her into contact with pimps and mobsters, and the later witness accounts suggest she was to hiding out, but from whom, and why?

Geary faithfully and concisely follows what due to it’s sensational nature, was a well staffed and sustained investigation, introducing us to a succession of investigators, witnesses and suspects. Was she killed by organised crime or lone pervert? Was the dismemberment ritualistic, or simply practical – to get the body into that cement sack? You’ll be as interested in the investigative process as any solution, and that’s a real testament to Geary’s almost invisible artistry in shaping the facts into a gripping story.

Black Dahlia received the Reuben Award for Best Graphic Novel of 2017 from the (US) National Cartoonist Society. Whether you’ve been following the franchise, or are simply intrigued by the concept, you can buy this with confidence.