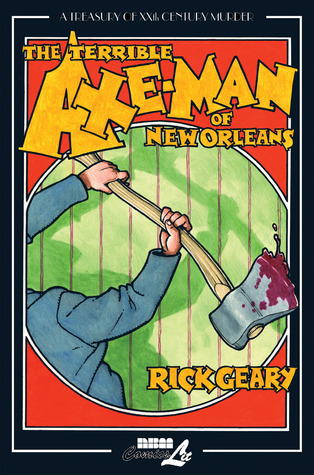 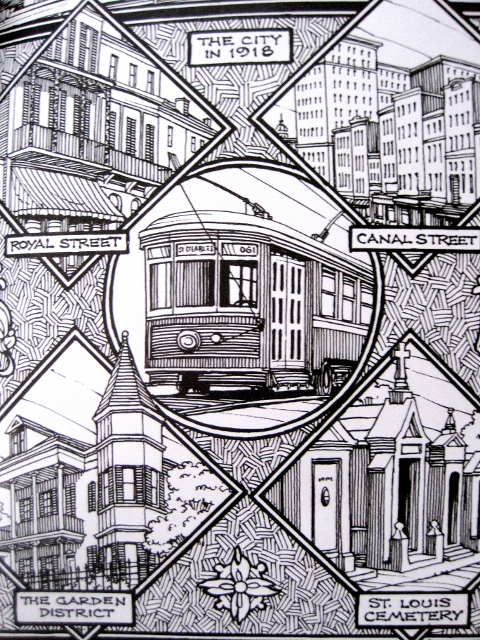 In the summers of 1918 and 1919 the suburbs of New Orleans suffered a rash of inexplicable killings, linked by similar methods and victims. The murderer gained access to the homes via chiselling away at a panel on a wooden door. These homes were owned by immigrants who ran an adjoining grocery store, who were then found murdered by being repeatedly hacked at with an axe they kept on their premises, which was then discarded. These murders appear random and with no motive other than the thrill of the kill as little connects the store owners, and they’ve not been robbed despite the easily located presence of valuables or cash in their homes.

Outside New Orleans the case of the axe-man is perhaps not as well known as the topics of similar expositions by Rick Geary, and he begins his diligent reportage with a history of New Orleans to 1918, characterising the city, its importance and its achievements. This is partly by way of explaining the melting pot population, and thereafter using his usual meticulous methods, Geary lays out the facts of the cases as objectively as he can, initially pointing no fingers toward suspects other than those identified by surviving victims. There is a similarity between the case and that of Jack the Ripper just over twenty years earlier in London, and like the case of Jack provocative taunts are sent to the newspapers and then published to stoke a sensationalist fear. One gives a date on which the axe-man claims he’ll strike again, yet saying he’ll spare any house in which jazz music is playing. It’s a capricious touch, never proved false or genuine, but one that had the effect of jazz playing throughout the city on October 19th 1919.

This was Geary’s twelfth delve into the murky waters of ancient crime, and he’s set a high standard for meticulous research accompanied by clarity and clear, dispassionate art. His methods hook and fascinate by sifting the truth from exaggeration and lies. For reasons revealed by the conclusion, The Terrible Axe-Man of New Orleans differs from most of Geary’ other crime investigations, yet is perhaps more compelling for this. Myth and mystery remain.