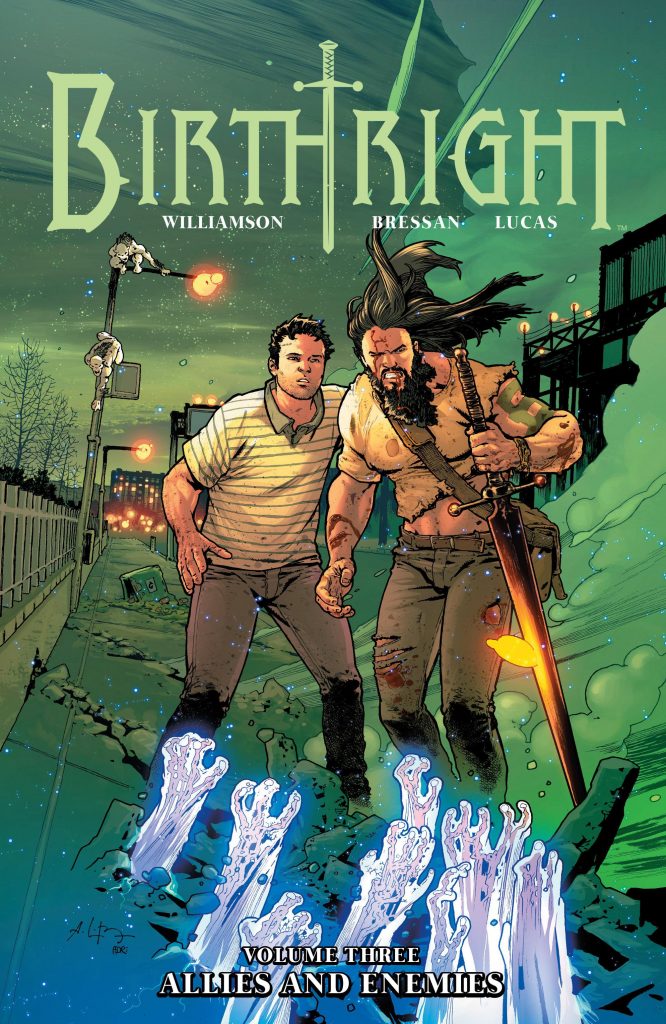 Birthright is the story of two brothers. Brennan Rhodes is around ten, eleven, in absolute awe of the adult that used to be his younger brother Mikey, who disappeared aged five, and returned a year later at his current age. Time passes at a different rate in Terranos, the fantasy land where Mikey found himself, and where he grew to adulthood under the prophecy that he was destined to defeat the evil Lore and free the land. What we know differs from the story he’s told Brennan and others since returning to Earth, that the prophecy was fulfilled and he must now deal with Lore’s remaining agents on Earth. The reality is that his first encounter with Lore ended with Mikey possessed by the Nevermind, and his return to Earth is as an advanced scout paving the way for Lore’s conquest by dealing with the few who might threaten him.

The established pattern to Birthright is that events around the Rhodes family in the familiar world are intercut with interludes from the past in which we see Mikey becoming the hero he was predicted to be. After the initial surprise of Homecoming, the fantasy sequences have become increasingly generic, although serving the purpose of displaying Mikey’s growth into someone genuinely brave and heroic, who’ll face danger for principle, not reward. There’s also an inevitability about them as Joshua Williamson has traded tension in the past for tension in the present day. We know what Mikey will become, therefore the fantasy interludes lack suspense.

That’s not to say they’re not well drawn. As seen by the sample art, Andrei Bressan can serve up a fantasy world to awe the eyes, and there’s a memorably disturbing version of hell late on, but that wouldn’t count for much if he wasn’t also able to convince with real people on our planet. You can look at Bressan’s pages and pick up intent and the relationships between people at that moment, if not the subtleties, just by scanning the expressions. That’s impressive.

Williamson is good at confirming what we’ve just about suspected. It happens a couple of times, which means he’s been leading us all the way. Unpleasant FBI agent Kylen has been too forcefully demanding since Mikey’s disappearance, to the point of being villainous himself, and we now learn why. Williamson’s given a considerable amount of thought to each member of the Rhodes family and how they’ll react to any given circumstance. Father Aaron has found some courage, but remains a dreamer at heart, while Mikey has his mother’s pragmatism and determination. The ebb and flow of Brennan and Mikey’s relationship through Allies and Enemies is impressive, with Brennan also determined and occasionally remembering that technically he’s still the older brother.

Toward the end of Allies and Enemies Wendy Rhodes is told “destiny is not a black and white concept. Your son hasn’t lost yet”, which is Williamson confirming the sliver of hope the plot has offered since we learned of Mikey’s possession. He’s not behaved well, but despite everything he’s still someone to root for. Perhaps his fortunes will turn in Family History.