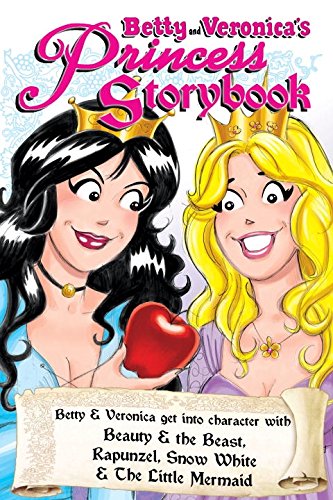 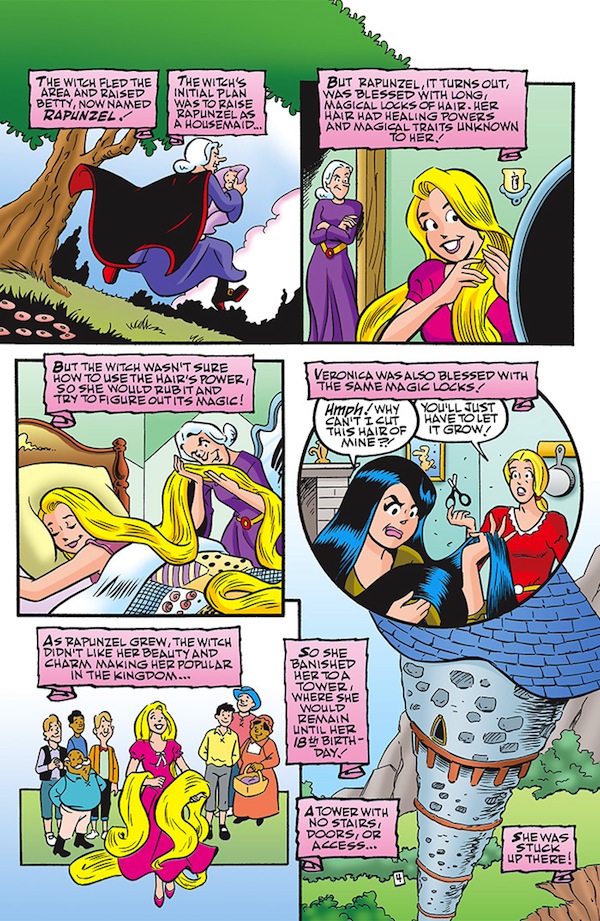 Archie Andrews has forever been a good-hearted lad lacking in common sense whilst Betty Cooper, the pretty, sensible girl next door waits ardently nearby, loving the great ginger goof. Veronica Lodge is a rich, exotic and glamorous debutante who only settles for our boy if there’s nobody better around. She might actually love him too, though. Despite their rivalry, Betty and Veronica are firm friends.

Augmented with informative, history-packed text features on the original prose stories, incisive creator commentary and a cover-and-variants gallery, this bright and breezy, full-colour chronicle begins with ‘The Story of the Rapunzels’ before ‘Bad Hair Daze’ takes the much-told tale into strange new territory. Here a devoted childless couple is “blessed” with a happy event after promising a witch their firstborn, but the crone can only claim one of the resulting twin girls. Choosing blonde Betty and rejecting raven-tressed Veronica, the hag isolates the golden child in a tall tower for years, but completely underestimates the power of sibling love – and rivalry – when Ronnie finds her sister and Prince Archie finds them both.

Next is ‘Betty and the Beast’, wherein sorceress Veronica curses haughty Prince Archibald to a life of hideous isolation after he refuses to go steady with her. The lonely, angry, repentant monstrosity only begins to change without and within after dutiful daughter Betty moves in to save her doddery old dad from the monster. The tale is further complicated when vain Lothario Reginald sets out to rescue poor Betty, but finds the seductive sorceress more to his taste.

‘Snow White and the Riverdale Dwarves’ once more casts Ronnie as the villain (with potential home-wrecker Cheryl Blossom as her snippy magic mirror), jealous of Betty’s buxom beauty and determined to commit appalling deeds to remain the “hottest in the land”. Thankfully a bizarre bunch of diminutive forest dwellers are ready to take the golden girl in and aid ineffectual Prince Archibald in saving the day and getting the girl.

The next classic revision stars our girls as ‘The Little Mermaids’ who sacrifice their tails and beautiful voices for a chance to spend three mute days out of water trying to win the love of a certain ginger royal scion. The determined rivals hadn’t reckoned on Cheryl the Sea Witch cheating, but the surprise twist in this tale comes from Archie’s final choice and the girls’ prompt reaction.

Closing this entertaining second showing of an irresistible idea is the outrageously amusing ‘Reggiestiltskin’ with Ronnie and Betty BFFs until that annoying Prince Archie sees and wants them both. Sadly they both desire him too, which enchantress Princess Cheryl can’t allow. She wants the kingdom and will even marry the idiot Prince to get it and so employs wily gold-hungry goblin trickster Reggiestiltskin to get the girls out of the way. However, even cunning witch-queens can underestimate the conniving nature of gold-grabbing goblins.

Co-starring all the adorable supporting characters we know and love (Jughead as Betty’s sharp-tongued fish-pal Forsythe is a sight once seen, never forgotten), these smartly beguiling skits are a marvellous example of just why Archie has been unsurpassed in this genre for generations when it comes to family-friendly fun and wholesome teen entertainment. And they were all read and re-read happily ever after…