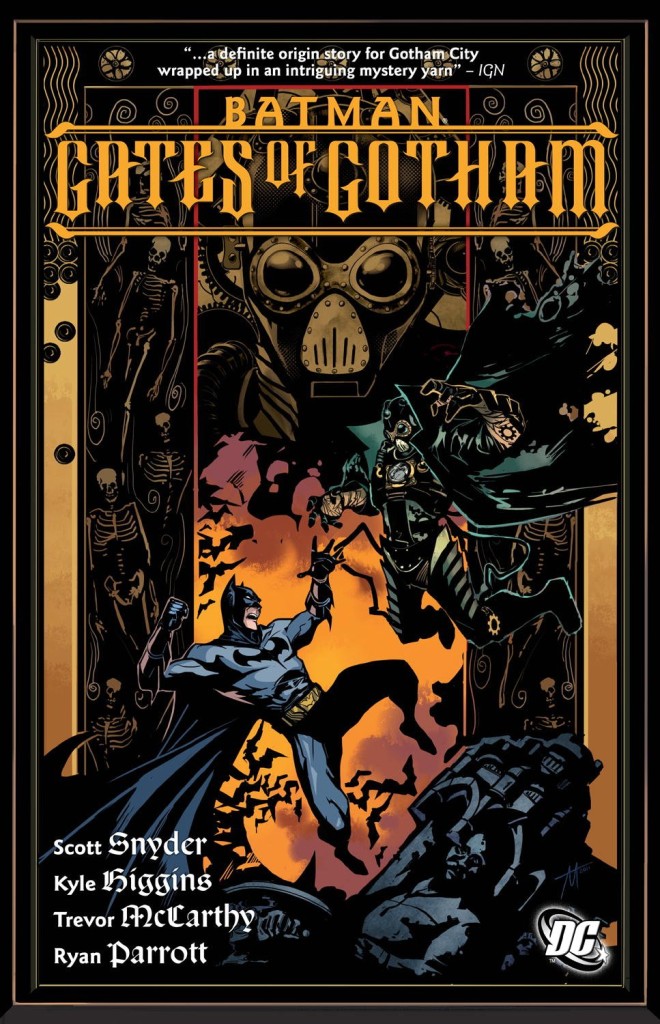 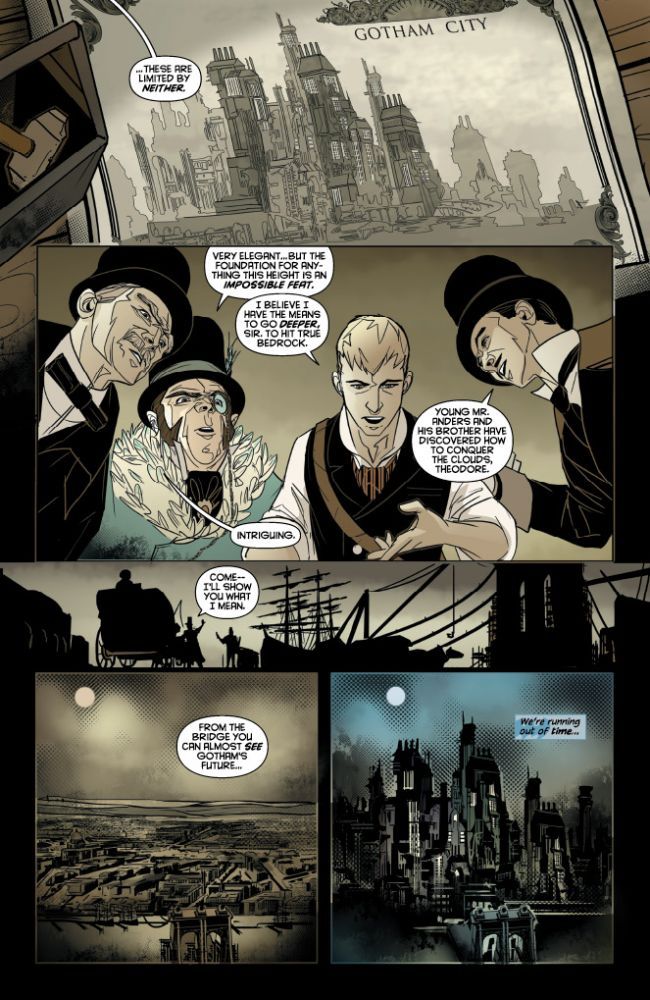 Gates of Gotham is an awkward book. In places it’s very interesting, casting out philosophical comments about the nature of a city and considering whether that’s ingrained in the circumstances of its foundation, and in others it’s very ordinary indeed.

This is set during the period Dick Grayson was Batman as Bruce Wayne was absent. Damien Wayne as Robin, Red Robin and the Cassandra Cain version of Batgirl all assist as Batman attempts to discover who’s destroying structures connected with Gotham’s founding families.

A parallel narrative depicts the 19th century construction of Gotham as controlled by wealthy businessmen with vision, whose families are Gotham elite, employing a pair of equally visionary architects. Three families are initially identified, the Waynes, the Cobblepots, from whom the Penguin is descended, and the Elliotts, ancestors of another Batman foe, Hush. Later, in a tip of the top hat to Batman’s creator, we also meet the Kanes.

Scott Snyder and Kyle Higgins’ plot is scripted by Higgins and Ryan Parrott to no discernible detriment, but is flawed by too many sequences flying in the face of previously established elements for the sake of convenience. As examples, Hush, once a terrifying and capable foe, is reduced to a cackling voice of provocation, while a new villain is able to take on the exceptionally well trained combat team of Robin and Red Robin single-handedly with very little pause for thought. Other sequences that don’t quite come off are the internecine conflicts between Batman’s helpers, particularly Damian’s antipathy for Cassandra, which leads up to a pivotal moment of trust that’s then underplayed.

The 19th century sequences are far better, with a well conceived air of malice, deceit and tension, and they produce a fine ending. Much is made of exclusivity, and when delivered in context the line “After all, you’re not one of us”, is immensely chilling.

Trevor McCarthy is a consistently interesting artist, and extremely adaptable, here delivering the correct tone to the present day and to a century previously. As with the writing, though, he picks up more collaborators along the way, with Graham Nolan laying out the final chapters and Dustin Nguyen and Derec Donovan standing in.

Once that story’s over we see what Higgins can do plotting solo, with McCarthy again providing the art, and it’s very impressive. With the days of Batman Incorporated now distant it takes time before the relevance to Batman of a repressed and angry French Muslim with a talent for parkour sinks in. Higgins creates a sympathetic new character and embeds him in Batman’s world with convincing narrative captions, and despite the overseas location there’s a thematic link to the title story in investigating the effect of a city on its inhabitants. If only the lead feature had been as consistent.