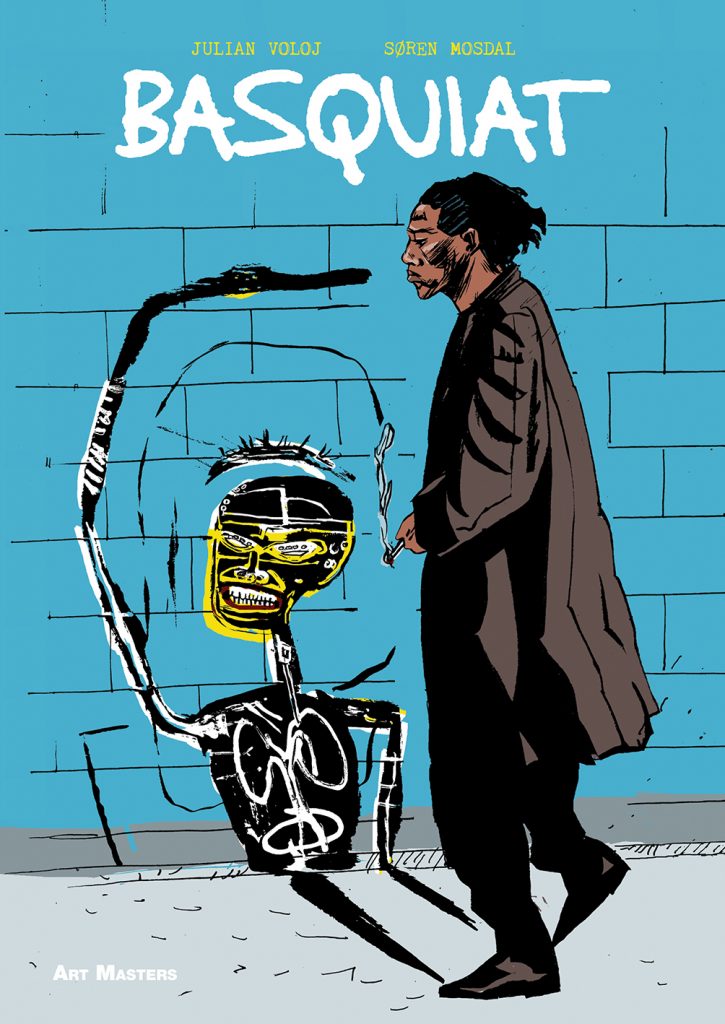 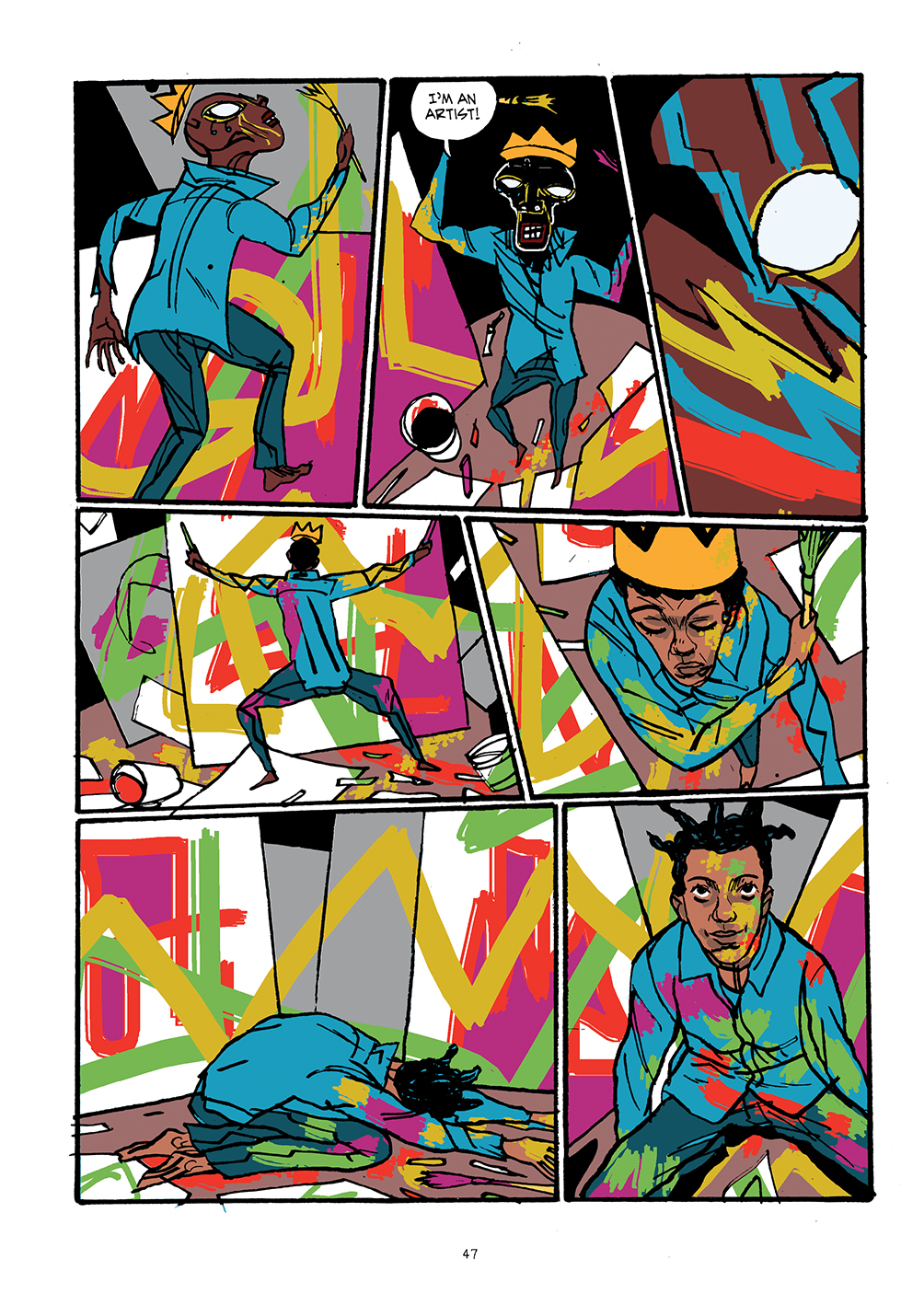 Jean Michel Basquiat was a New York and global phenomenon. With pop-star looks and prodigious talent, his was a rapid progress from homeless graffiti artist, through Warhol muse, and art world enfant terrible, to youthful corpse. A promising subject then for a graphic biography.

Julian Voloj has previous with biographies of New Yorkers and artists, including Superman co-creator Joe Shuster. He introduces us to Basquiat on the brink of an overdose, and revisiting key moments in his life. An avatar of death (cover image) acts as interlocutor and narrator, guiding Basquiat and us though his key moments.

Voloj finds plenty of good material – a mother committed to mental hospital, tensions with his father, a childhood accident, drugs and petty crime – all before he even becomes an artist. Basquiat packed a lot into his 27 years, and Voloj captures that in these 130 breathless pages. He’s adept at distilling relationships into a series of dramatic scenes. Basquiat’s polyamory is smartly conveyed with a bedroom sequence where the woman changes every panel. Later we meet Kenny Scharf acting lookout as Keith Haring graffitis the subway. They help Basquiat access a club he’s barred from (guess why), just as they will enable his entry to the lucrative gallery world. Their subsequent graffitiing of that club, and gleeful eviction, also predict Basquiat’s stormy relationship with the art world.

It’s a genuine spotters delight seeing Basquiat selling his post card to Andy Warhol, and (to pun on her film) ‘in bed with Madonna’. Too often, though, it feels like a checklist of names and faces most readers could do without. This is most evident with his romantic partners. A woman appears and tells him she is pregnant with his child, then he propositions another ‘for old times’ – flicking back to compare faces and hairstyles doesn’t suggest we have met them before. This highlights a common tension in life writing, and it may have been better to have sacrificed factual completeness for narrative, in this case seeing fewer characters in more depth.

Søren Mosdal’s art sometimes looks hasty, but his energetic, unfussy linework channels Basquiat’s style. His sketchy backgrounds capture the essence of housing projects and subway stations. He thrives on the scenes of Basquiat painting (featured image), clubbing and tripping. He also does a fine job differentiating the large cast – the most famous faces like Warhol and Madonna are instantly recognisable, though Debbie and Chris from Blondie less so. A band with a tall man and blonde woman might be mistaken for Sonic Youth, but turn out to be Talking Heads. He omits the simple device of writing the band name on the (already visible) bass drum, and misses other tricks, like distinguishing girlfriend Eszter from similarly gamine impresario Maripol by not dressing them both in red.

Voloj includes many details that may have shaped Basquiat’s life, but leaves the reader to guess if and how they did so. Did his father’s love of jazz shape his improvisatory approach to painting? Was his life, like his mother’s, limited by mental illness – and self-medicating the cause of his drug use and premature death? The publishers’ blurb states that the book combines research with fiction, yet why cross into fiction if not to extrapolate on such issues? Equally lacking is much exploration of Basquiat’s imagery, not even the recurring African idol/death’s head motif that provides their narrator and cover image. That said, Basquiat is an informative and entertaining book, that could have been better still.