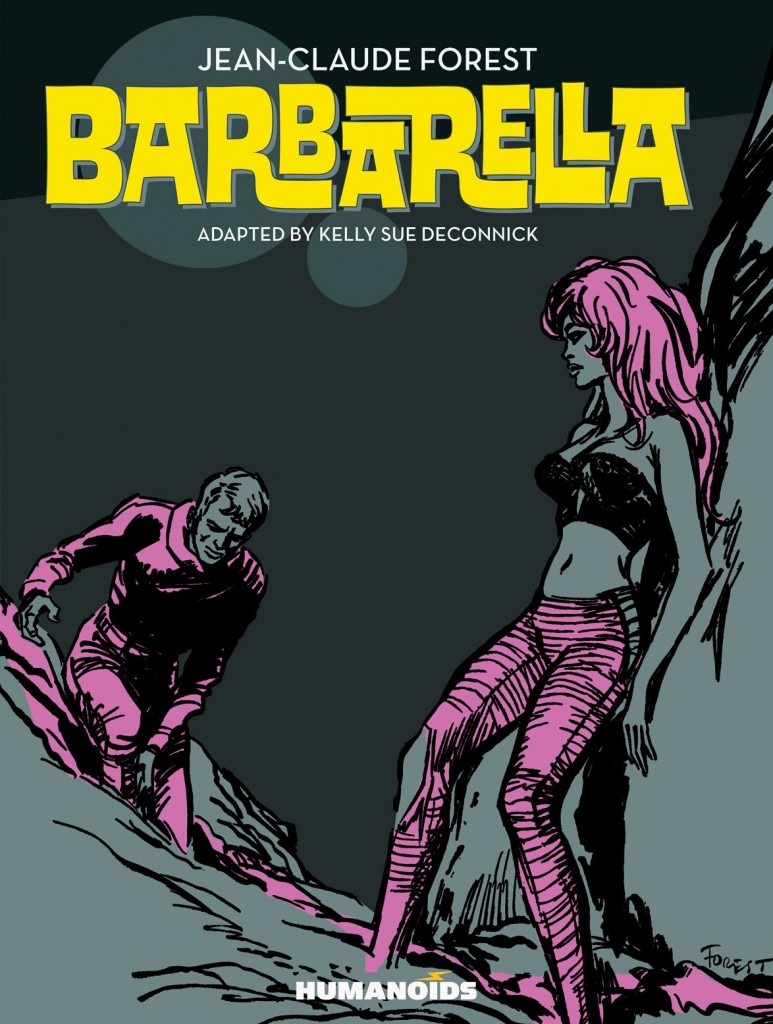 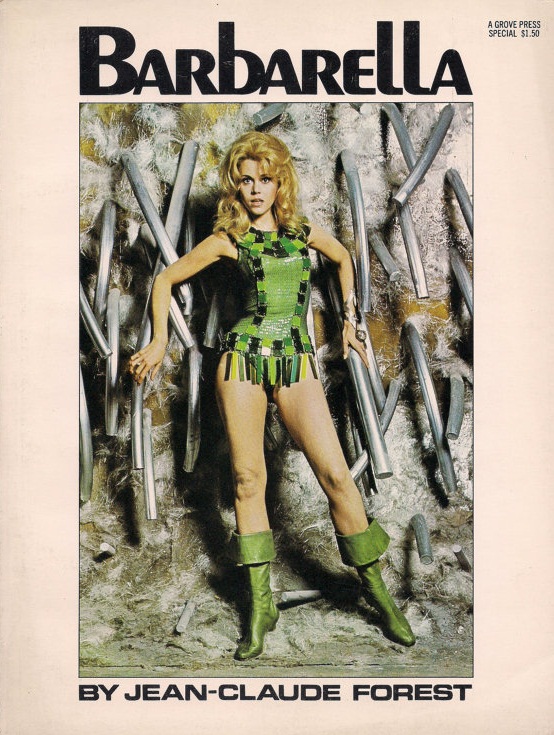 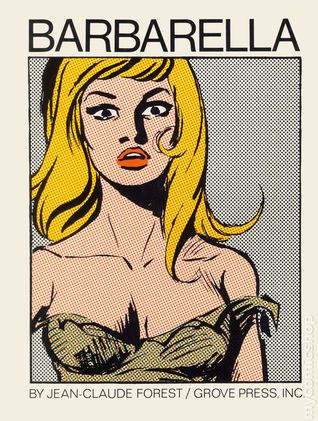 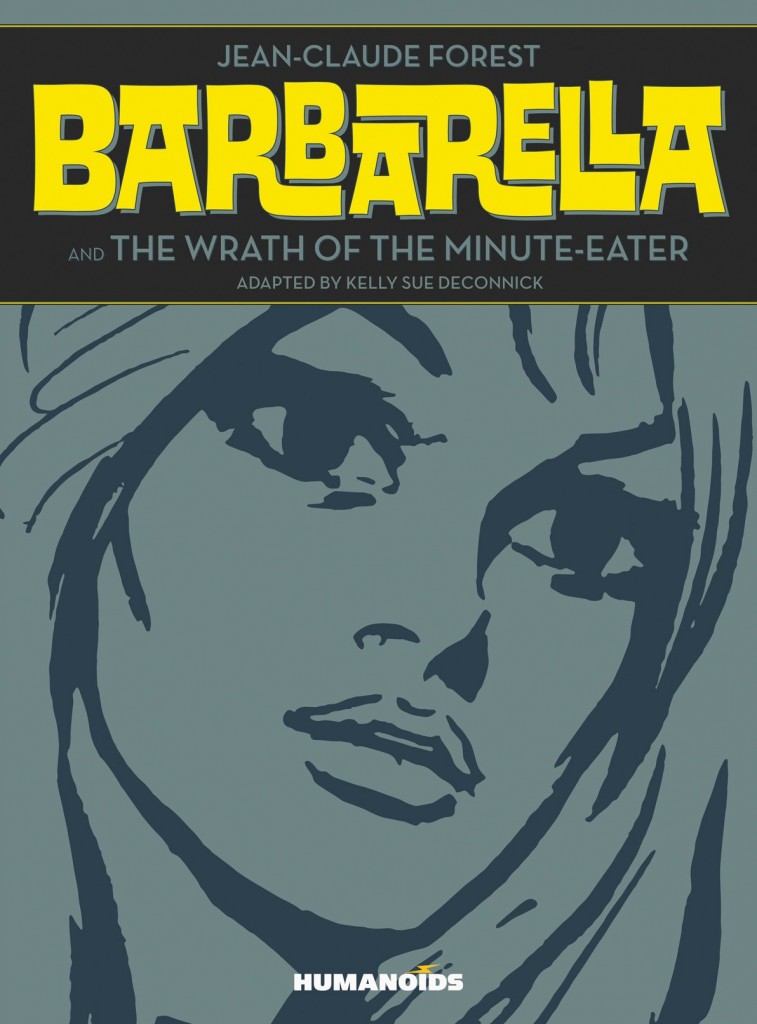 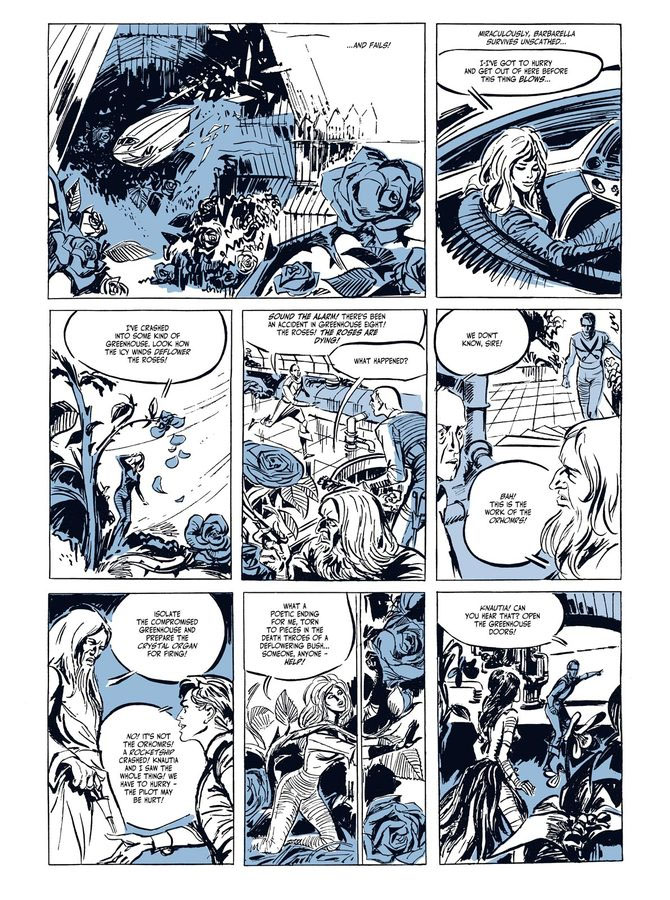 While whimsical, trivial and sometimes plain silly, it’s difficult to understate the importance of Barbarella as the first comic feature to graduate to the cinema screens in a meaningful fashion. Roger Vadim’s 1968 film wasn’t a series of action reels, but the full cinematic experience with a bona fide movie star Jane Fonda playing the lead role.

On reading this newly translated version combining both Barbarella graphic novels, it’s surprising how faithfully Vadim followed Jean-Claude Forest’s vision as originally serialised in a men’s magazine from 1962. The venue defined the content, and it’s only a couple of pages before Barbarella loses her clothing for the first time. Her libertine tendencies are definitely male fantasy material, but as in the film, she’s a woman utterly in control of her own destiny for most of the time, and ingenious enough to work out solutions when that’s not the case.

It would be nice to pretend that the Barbarella strip still has something to offer in the 21st century beyond the cultural importance, but locating the positive isn’t simple. What was once new and experimental has been surpassed by superior work. The Barbarella movie transcends the superhero and science-fiction action reels of the 1940s, but Forest’s script is very much informed by them. Barbarella dashes from one danger to the next, stopping only for bouts of sex, and while these dangers are imaginatively conceived the drawback is Forest’s art. Some individual panels are great, but for the most part sketchy characters populate sparse landscapes with little detail, layouts are often basic, and he’s not great at distinguishing the features of his cast. While fantastic creatures abound, they’re drawn in the most perfunctory manner. One can only wonder what Barbarella might look like if illustrated by an artist able to bring Forest’s imagination to life as Vadim’s film did.

For all the groundbreaking aspects of Barbarella, when it comes to attitudes toward women it’s very much rooted in its era. Kelly Sue DeConnick re-dialogued the strips, providing a more subtle infusion of the camp sexual innuendo, and in doing so makes Barbarella an equal opportunist rather than someone who takes her clothes off every time a man asks. Yet, as good as DeConnick is, the dated elements seep through. Interviewed on the Humanoids blog she mentions considerable debate with herself about the advisability of Barbarella being addressed as “girl” so frequently, but that doesn’t begin to address issues in the art such as women being spanked for misbehaving.

To coincide with the film, Grove Press published the original graphic novel in English, in both hardcover and paperback editions, but Forest’s second Barbarella story The Wrath of the Minute Eater has never previously been seen in English. From the abrupt ending of the opening adventure Barbarella has set up a business presenting an alien menagerie, but it’s growing stale. When offered the chance to refresh it she’s willing and from that point it’s off again on the same sort of discursive and surrealistic adventure as previously. Forest’s imagination is once again far in excess of his illustration, but this time there’s a greater thread connecting the plot. Yet somehow it’s still just not as much fun as expected.

Humanoids offer Barbarella in multiple editions. There’s digital, hardback and paperback, and an oversized art book that actually does Forest no favours as it accentuates the sketchiness.