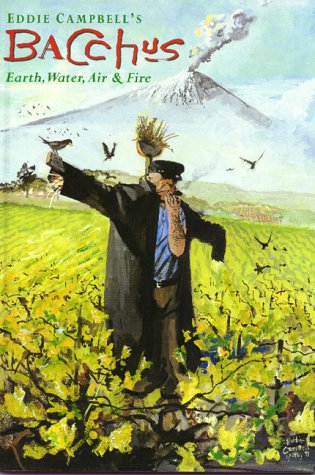 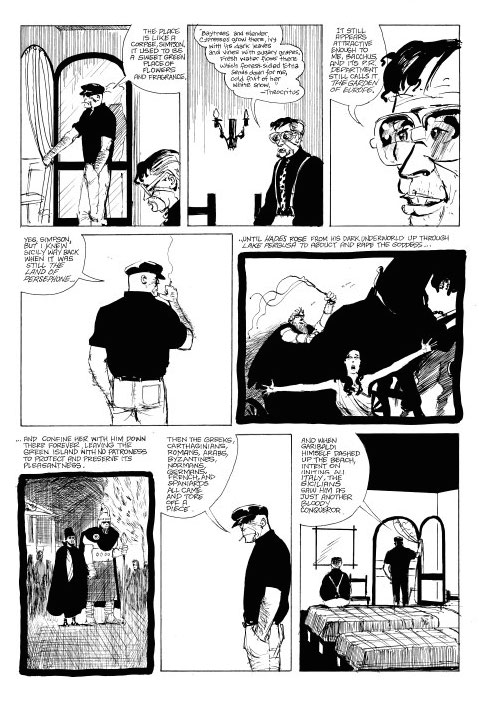 Eddie Campbell’s Bacchus, named after the Greco-Roman god of wine and revelry, is actually the story of several survivors of Olympus facing their last days in the 20th Century.

Earlier volumes consisted of two distinct strands. Immortality Isn’t Forever introduced us to ‘Joe’ Theseus, killer of the tragic Minotaur; and The Eyeball Kid, unlikely inheritor of Olympian power. Knowing it’s their last days, they set about settling scores and making final bids for the other kind of ‘immortality’. This was never going to be tidy – it spilled over into volumes 2 and 4, and they’re not finished yet.

Bacchus is indifferent to their struggles – he’d rather enjoy his last days and revel in stories of the past. He was seen Doing the Islands, over a number of short stories, and this volume picks up the journey. Earth, Water, Air and Fire reflects its original form – a pamphlet for each of the four classical elements, largely self-contained, but adding up to a larger story.

‘Earth’ sees Bacchus drop anchor in Sicily, with his human pal Simpson. It hosts Europe’s largest volcano, Mount Etna. This, in turn, was the final home of estranged Olympian Hephaestus – perhaps better known in his Roman incarnation as Vulcan, god of fire and the forge. His notable creations include the Kabeiroi – a secret society of his followers, and three magic eyes that are much sought after.

In ‘Water’ Joe Theseus, now blind, has turned his back on his ‘business interests’, to succeed Poseidon as God of the Sea. He seems comfortably settled, until an alluring emissary entices him to Sicily and the Kabeiroi. It turns out they’re preparing for a showdown with their less secret rivals – the mafia. Each side is seeking the patronage of the surviving gods, and the Kabeiroi think they’ll win over Theseus.

‘Air’ starts with The Eyeball Kid flying over the Mediterranean in a cardboard box. It’s a reminder of the humour at play – he’s got an upturned mop for a flag, and what looks like nineteen working eyes. The Kid, is very much in the clouds, and gives us his version of events in poetic wordplay. When he’s approached by one of the Kabeiroi: “It perspires that he’s in a position to regain for me… the eye of fate. It gives it’s wearer amazing powers of clearbuoyancy”. Campbell has fun channelling Lewis Carroll and James Joyce for the linguistic mash-ups, and it’s an elegant recap that also reminds us that The Kid brings to the best laid plans a dangerous unpredictability.

‘Fire’, finally, is the brief of Hephaestus – he’s long dead by this point, but the pace is, well… hotting up, so you’ll hardly miss him. He’s represented, in any case, through stories told, and those magic eyes, which have enticed everyone here for these climactic moments.

Visually, Campbell is transitioning from his impressionistic zip-a-tone collages to the pen and ink style he’d master on From Hell. There are some absolutely dazzling panels here, amongst some mediocre and rather weak ones.

Olympians negotiating the modern world? It’s an inspired idea, and Campbell makes from it a story that’s suitably epic, genuinely illuminating, and funny along the way: “You can’t just have ‘Bacchus’ in a passport! What’s his full name?”

This was the first set of Bacchus stories conceived as a volume, so it reaches a satisfying conclusion here. Most readers, nonetheless, will want to continue onto volume 6, The 1001 Nights of Bacchus. This is collected with the previous four books as Bacchus Omnibus 1. 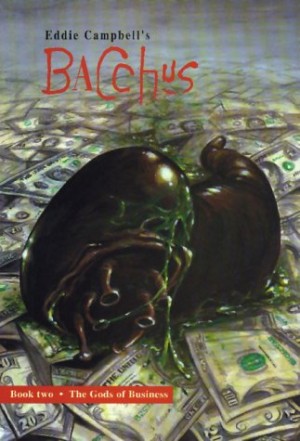 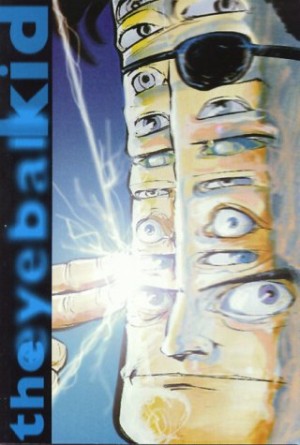