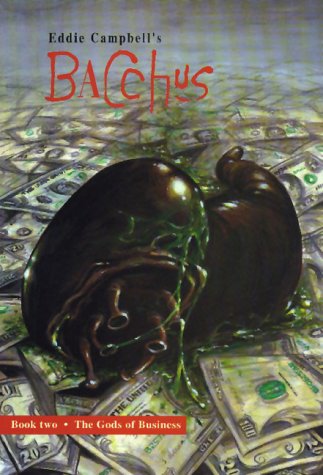 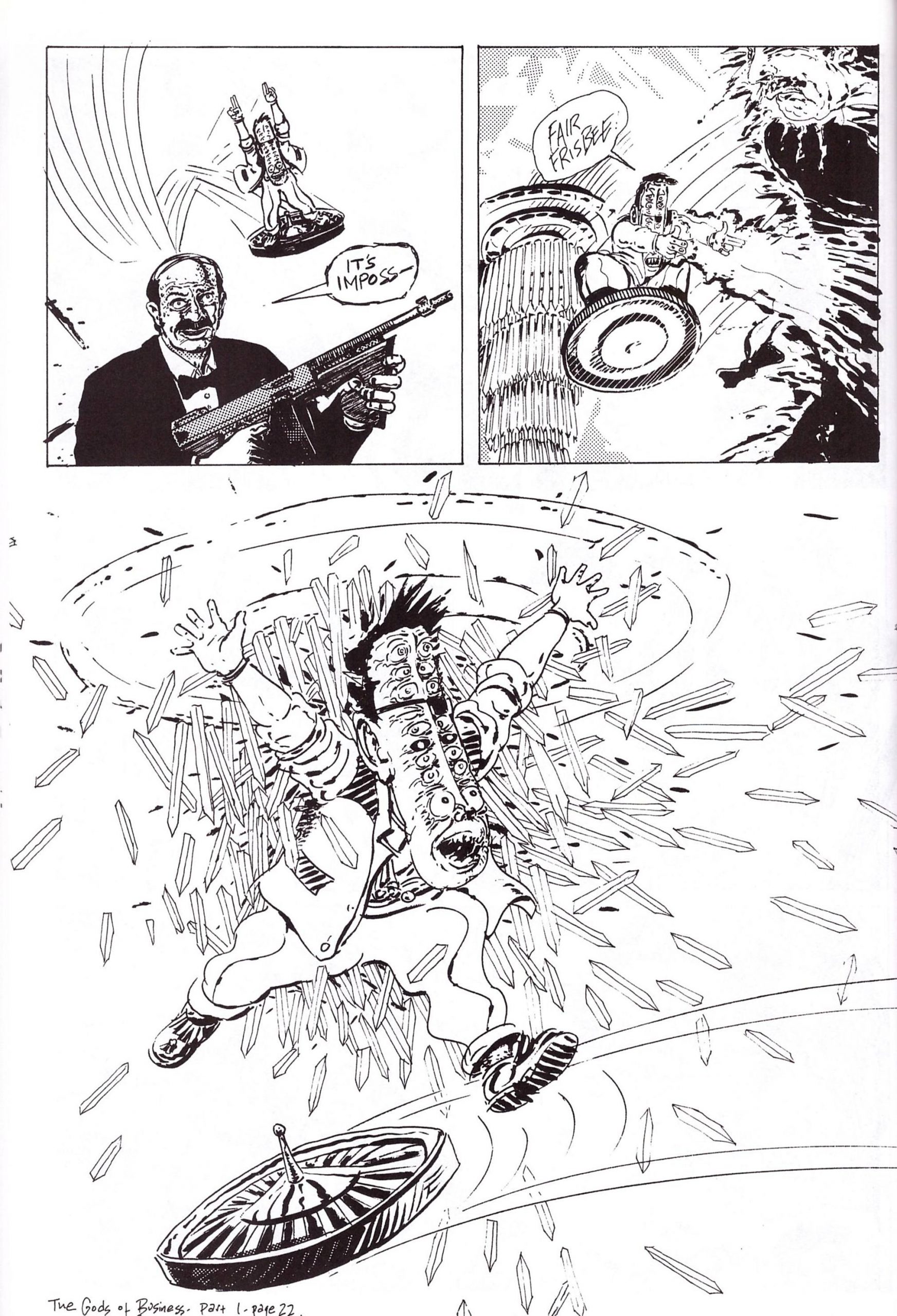 The Gods of Business completes the reprinting of the first run of Bacchus ‘pamphlets’ published in the UK as Deadface in the late 1980s. In the first volume, we met Bacchus and other Greco-Roman gods. By late 20th Century it’s dawning on them that, (as the title of volume 1 put it) Immortality isn’t Forever. It’s time to tie up loose ends and settle old scores.

This volume focusses more on Theseus (slayer of the Minotaur) and The Eyeball Kid, (unlikely inheritor of Olympian power). It starts with ‘Joe’ Theseus embarking from a plane to a waiting press pack – it’s the fallout from his open and destructive attack on Bacchus. The Telchines – Chryson, Chalcon, and Argyron, also move centre stage.

The Telchines were never in the forefront of the myths, and it’s perhaps relevant that their most god-like power is invisibility. It turns out though, that they had key roles in some of the defining events, from the ascension of Zeus, through to the final rebellion in the underworld. There’s no end to their ambition, and the only obstacles are unlikely allies Theseus and the Eyeball Kid.

All these guys love to talk about their glory days, so we have a lot of back story – good news if you missed the first volume. The first half of the book is as much flashbacks as present, but it’s important, as it’s those same stories they’re still playing out. Campbell’s carefully putting the pieces in place for a suitably mythic storyline.

Campbell enjoys the engagement of myths with the present. The warrior Theseus is now a gang boss. The Telchines are more corporate strategists referred to as the Gods of Business. They ‘acquired’ a lot of the gods’ treasure, way back, and invested it. Chalcon, the muscle is now balding, bearded and in biker chic. Chryson, the brains, more dapper in 1980s yuppie sharp suits and shirts. Argyron’s less concerned with such matters, sticking to the traditional kit that best matches with his helmet of invisibility, and in any case he’s not expecting to be seen much! In their desperate times they’ve stopped trying to pass unnoticed in the human world, having killed and used their powers in public, and law enforcement is involved.

Campbell’s sharp wit is still at play here. In the splash page of part two there’s a guy with a suit in the foreground saying: “Ladies and Gentlemen of the jury – I ask you! Is this the face of a guilty man?” He points to the Eyeball Kid, who’s in a suit, hair slicked down, sheepish look and holding his hat, looking like nothing as much a wild west era farmer in church.

Ed ‘Ilya’ Hillyer on inks manages to retain Campbell’s strengths and distinctive techniques, while fixing some of the weaknesses, adding lush, confident brush work to Campbell’s trademark Zipatone effects. Unlike the first volume, here are no jarringly poor panels here.

Campbell has an effortless mastery of the language of comics. A nice touch is the shot of Theseus at home thinking. He constantly returns to this scene as other strands of the story progress. Theseus doesn’t move- we just see the flowers wilt and the fruit go rotten in the bowl. A few weeks is nothing after 4000 years.

The gods of Olympus in today’s world is a great idea. Campbell realises it thoroughly, and with some wit. Ilya’s finishing also takes the art up a league, making this a sound purchase. If you can’t find this edition, the first five of these volumes were gathered in 2015 into Bacchus Omnibus 1 from Top Shelf, and the next is Doing the Islands with Bacchus.