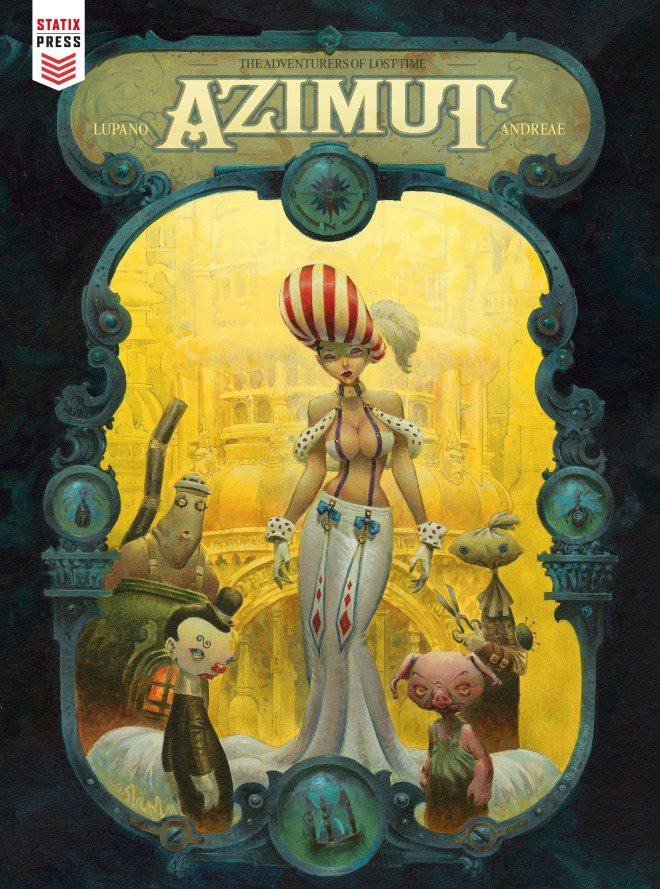 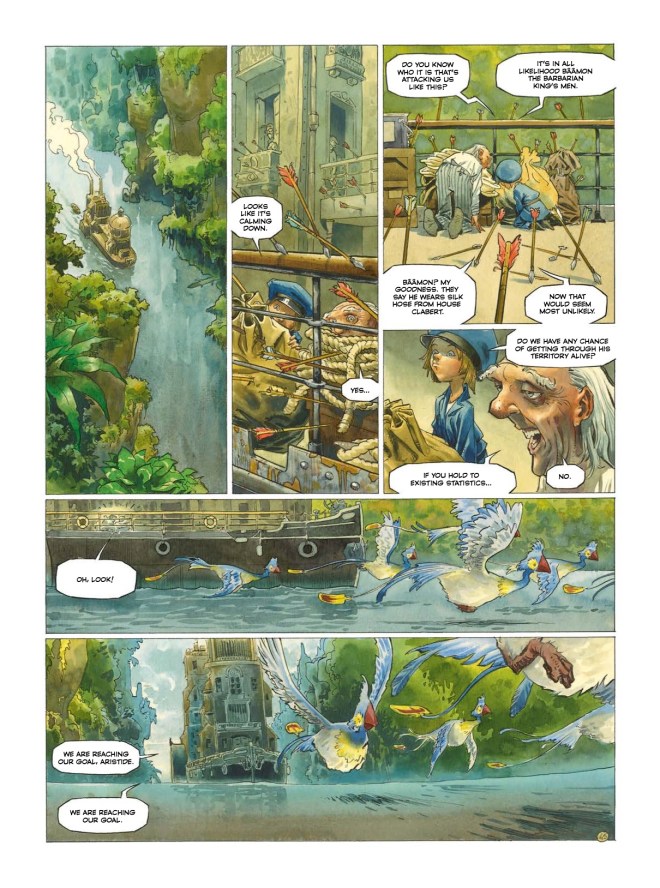 Azimut is a graphic novel of far greater complexity than it first seems, and extremely difficult to summarise at all, never mind without revealing something that initially remains concealed. Plenty does.

The first two dozen pages introduce an explorer, a conwoman, a king, a painter, the Aeon bird, a mad professor, a bounty hunter, and a bunch of beings referred to as “freaks” resembling mutated toys. An early disclosure is that the magnetic North Pole no longer operates, which leads into a fantasy about exploration and the quest for immortality infused by Wilfrid Lupano with a sharp sense of absurdity, and by artist Jean-Baptiste Andréae with incredible imagination. Everything is beautifully painted to look gloriously decorative, and while the panels can reveal a gorgeous natural landscape, they can also feature scenes that might have been conceived by Salvador Dali. Among the early pages a few panels feature a large fish buried in sand head down. A few scraps of flesh remain at sand level, while the remainder of the corpse has been picked clean, leaving an imposing half skeleton as a decorative device. There are pages dense with cogs and gears and some that could be an Amazonian scene on a sunny day. It’s an award-winning artistic outing, and this first English edition gathers the complete story, originally published over five volumes in French. It’s wonderful, creative and inspiring, but read no further if you want to avoid spoilers.

On other projects Lupano’s a very smart writer, so the introduction of a white rabbit is a deliberate reference to the work of Lewis Carroll, which has a similar tone. The Time Snatcher becomes an issue, at first supposed to be mythical, but people have lost their youth overnight, while two people attempt to investigate the problems of time, one proactive and adventurous, the other scholarly and reclusive. It’s the adventurous Manie, pictured on the cover, who eventually emerges from an ensemble cast to become the person to whom all other characters gravitate. She wants to become immortal, but while immortality is on offer, the forms of it that come easily hold no appeal.

Each chapter runs to more or less 45 pages, and in each Lupano broadens the world, introducing new locations with different moods and bizarre concepts that require time to fully absorb, even accounting for a magical realm. For example, how does a rabbit become the North Pole? Such absurdities feature throughout, although not always on that scale, but while clever and complicated, Azimut can be followed easily enough. Lupano also briefly touches on the stupidities of our own world, the points made by reflection, with countries escalating toward war the most obvious example. Another is gods being unconcerned at human problems, and while Carroll delivered generally upbeat adventures for children, Lupano’s fable is constructed for adults, and there isn’t a happy ending for everyone. There’s a cost to acquiring time, and Manie eventually comes to realise that.

By the fourth chapter Lupano has explained most mysteries, and given readers more to consider about the value of life. Azimut applies modified fairy tale creations to a multi-stranded narrative that’s sparklingly ambitious, beautifully illustrated, and immensely readable.