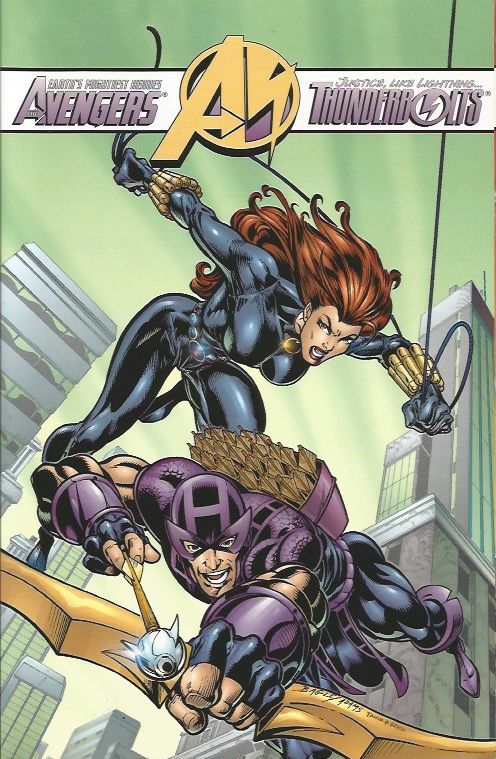 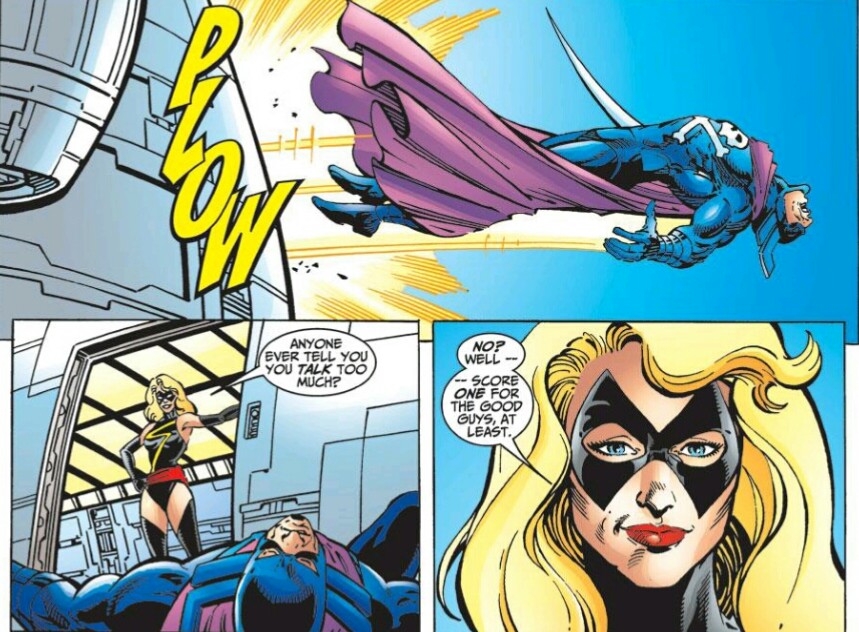 The Avengers have a long history with the Thunderbolts, as the latter were originally the super-villain team known as the Masters of Evil, before they apparently, and then actually, reformed. For a time, Kurt Busiek was writing both Avengers and Thunderbolts, so the two teams had crossed paths already,  in Avengers: Clear and Present Dangers. In 2000, a crossover ran from one title to another, but by this point, however, Busiek was no longer writing Thunderbolts, so their chapters are the work of Fabian Nicieza – though one suspects that Busiek had a major hand in plotting the overall structure. The entire crossover is collected here, in volume 1 of Avengers/Thunderbolts (volume 2 brings together a 2004 Avengers/Thunderbolts miniseries). This also functions unofficially as the sixth volume of the collected Busiek/George Pérez run on Avengers.

One of the problems with a crossover such as this is managing the ongoing plotlines – regular readers of each title don’t want to see those put aside, but they may not mean much to readers who have come in from the other title. Busiek handles this well – the subplots tick over, but for the most part the focus is on the main event, the Avengers and Thunderbolts teaming up against a world-threatening plot by super-powered criminal Maggia overlord Count Nefaria, a tale that involves the Grim Reaper, various other Maggia villains, and most of all, Nefaria’s daughter and Iron Man’s ex, Madame Masque. Along the way, an unresolved plotline from mid-1990s Avengers is wrapped up.

Nicieza is less successful in the Thunderbolts chapters. These feature many multi-page sequences in which the reader is diverted into paying attention to characters who have little or nothing to do with the Nefaria narrative. These subplots are not concluded in this volume – indeed, there are two unresolved cliffhangers. This can make for a frustrating experience for the reader, who has to track down further Thunderbolts comics if they want to know what happens – not easy, as these issues have never been collected.

The Nefaria Protocols also marks George Pérez’s swansong on the main run of Avengers, though he would return a couple of years later to draw JLA/Avengers. Even though he needs an art assist from Paul Ryan (not easy to spot, due to Al Vey’s inks applying consistency), Pérez rises to the occasion, delivering dynamic and attractive superhero art. It is very much in his later Avengers style, with less background detail and more blank space, which may suggest that after three years on the series Pérez was feeling the pressure, but the quality never really dips. Mark Bagley’s Thunderbolts chapters look crude and unrealistic by comparison, though they’re perfectly fine in their own right.

Busiek also pulls out all the stops to make Pérez’s final story a good one. The plot structure works well. Some complain of a lack of pay-off in Busiek’s work, but that isn’t evident in this narrative. It’s also a delight to see the Avengers working as an effective team, under the Wasp’s leadership. This volume is a highlight of Busiek’s run on this series, and in retrospect, he would never achieve such heights again – Pérez’s departure seems to have taken some of Busiek’s inspiration.

The content can also be found in the hardcover Avengers Assemble volume 3.