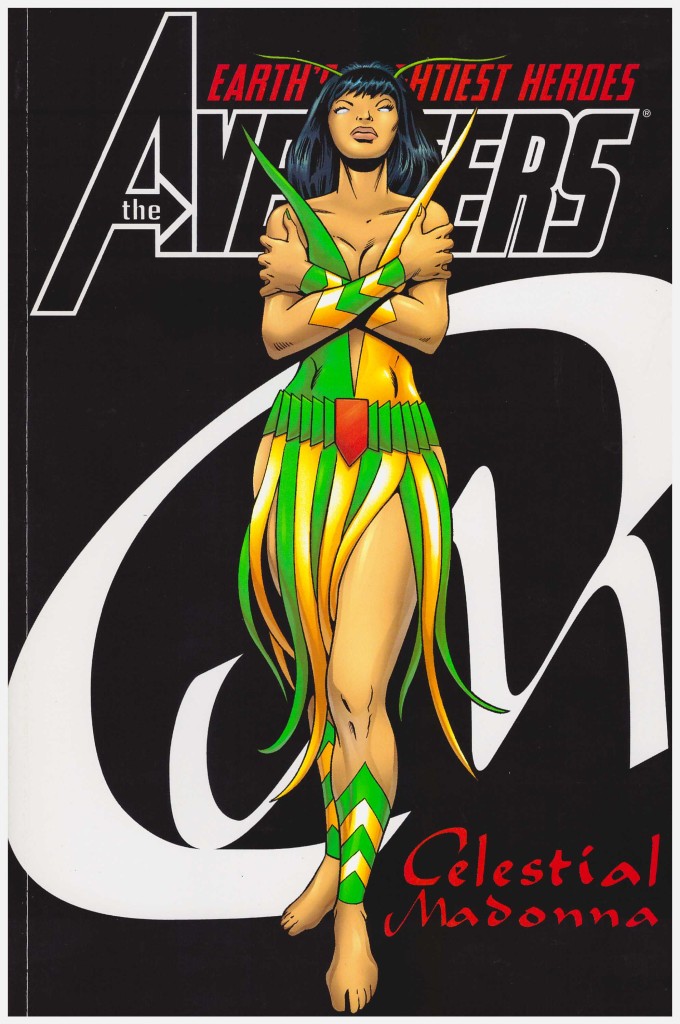 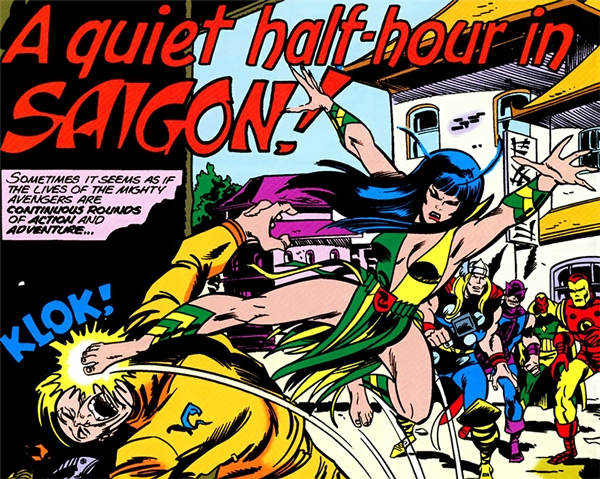 Eighteen months prior to the material reprinted in this collection, Steve Englehart had introduced the Swordsman and Mantis to the Avengers. The former was a reformed villain who’d hit dissolute rock bottom in Vietnam before being dragged from the gutter by the love of what he presumed was a good woman. Mantis was the proverbial mystery wrapped in an enigma. An accomplished martial artist with a spiritual side, her background was unknown, and her spirituality didn’t preclude a determined assault on the Vision and Scarlet Witch’s relationship.

The book starts with the appearance of a star above the Avengers Mansion. According to villain from the future Kang this indicates one of the women within (Agatha Harkness, Mantis and the Scarlet Witch) is destined to become what he refers to as the Celestial Madonna. Their mate will be a being of great power, and Kang is determined he’ll be that man.

There’s a lot of Kang in Celestial Madonna because Englehart was the first to realise that if your villain travels through time he can retreat to the future after a defeat, recover, and return minutes after he left. It’s only one of numerous ideas beautifully stitched together. Having crowed about the future of others, Kang is given a glimpse of his own future, and doesn’t like it. He’d been teasing with snippets about Mantis’ origin for some while, but Englehart pays out in spades, also providing the complete origin of the Vision, and almost as an afterthought he throws in the history of the universe besides. It all culminates in a pair of weddings.

All that is among a considerable amount of inventive superhero action. There’s a chapter where the Avengers come up against some communist villains in Vietnam, and another sequence when they’re wandering around the labyrinths of Limbo and encounter dead characters led by Kang. That’s dialogued by Roy Thomas.

In terms of art, over half the book is solid enough with the clear storytelling of Sal Buscema inked by Joe Staton. The quality moves up with two chapters pencilled by Dave Cockrum, including a real heartbreaker, but unfortunately drops right down to the basement with some dull George Tuska work and a finale wretchedly drawn by Don Heck. How Englehart’s heart must have sunk when he saw the culmination of two years work reduced to that. This curse appears to have extended through the decades to the bizarrely deformed facial features Mantis sports on the cover constructed from internal art where Cockrum drew her properly.

There are stylistic elements identifying this work as the product of the mid-1970s. The conclusion is presented in extremely wordy fashion, some of it expository, but Englehart largely avoids the soul-searching thought balloons betraying much other work of the period. The towering ambition, though, suspenseful plots and neat twists far outweigh the deficiencies, and Celestial Madonna remains very readable today.

If preferred, the content is also available as the hardcover Marvel Masterworks: Avengers volume 14, and within the black and white pulp paper reproduction of Essential Avengers 6. There’s also The Complete Celestial Madonna Saga, which adds several earlier Avengers stories that don’t match this selection, and an ill-advised 2001 sequel Celestial Quest. You’re better off sticking to this version.