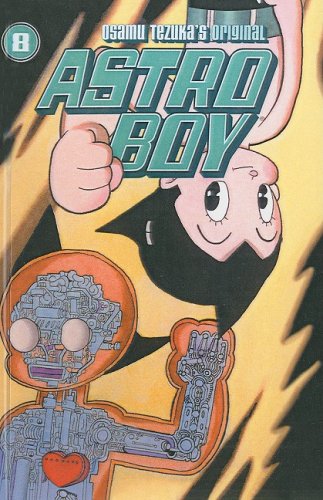 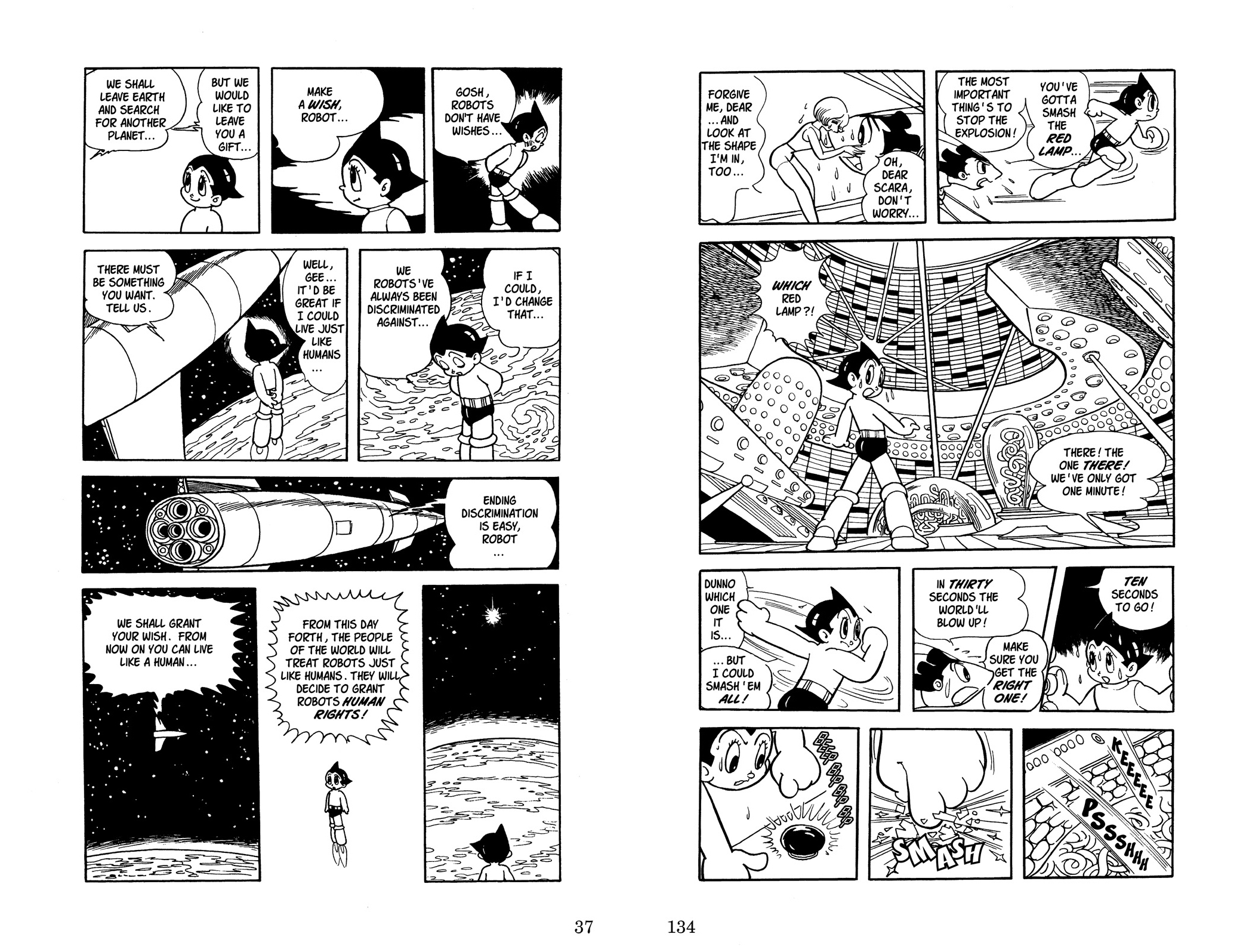 Volume eight of Osamu Tezuka’s original Astro Boy comics, translated by Frederick L. Schodt, continues directly on from the end of volume seven, with the third and final part of the three-volume epic adventure called ‘“Once Upon a Time” – Astro Boy Tales’ (1968). There is also one short tale to round out the volume, ‘The Faceless Robot’ (1967).

This giant-size adventure began in volume six with Astro going back in time to 1997, struggling with the unjust conditions of the past, being sold as a weapon and then escaping to Vietnam, to fight on the side of oppressed Vietnamese villagers with his last scraps of power. After his energy fails, he lies dormant at the bottom of a river for 25 years. He is revived with enough energy for one day before ‘dying’ once again. Another 25 years pass before a second Astro is recreated at the hands of Dr Tenma, who then sells him to a circus. The last we see of this new Astro is a battered and scarred husk, drained of energy once again and dumped in the closet of Mr Hamegg.

After all of that angst, suddenly in this volume, things are restored to their innocent rock’em, sock’em status quite quickly, with Professor Ochanomizu stealing Astro’s body while Hamegg sleeps and that’s it. Astro is powered up to tackle the ‘Living Mold From Outer Space’, a strange alien bacteria that looks like it might infest Earth. After he fixes the situation, in ‘A Declaration Of Robot Rights’, the world is once again a hospitable place for robots. The reset button has been pushed.

So essentially what we have here is a reboot; after twenty years Tezuka has taken us back to the beginning when Astro Boy was a much more childlike character, and we are seeing him learning how to be a superhero all over again. However because the stories in these volumes are being presented out of sequence, the effect of a boxfresh, naive and wide-eyed ‘Astro Boy Year One’ does not have the powerful effect of surprise on us that it would have had on those readers seeing these stories year-by-year from the 1950s to the 1970s.

‘Astro Goes To Elementary School’, continues with this new Astro finding his atomic-powered way in the world with his new robot parents. ‘Gone With The Snow’ wraps up the ‘Once Upon a Time’ saga by showing us what happened to his friend, the alien insectoid Scara.

The newly established happy upbeat mood takes an immediate battering in ‘The Faceless Robot’. A giant industrial robot called Damdam discovers his head is missing after an explosion. Convinced someone has stolen it, he wanders around ripping the heads from other robots. Astro Boy tries to help him but nothing goes as planned and the ending is another tearjerker. But that’s the way of these things, a hero’s path is never easy, especially when Tezuka is in charge, and the ups and downs are expertly judged by a creator who is a master of his craft.