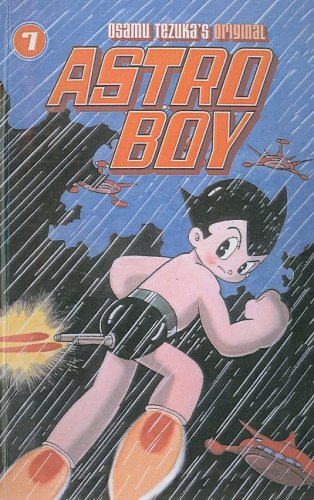 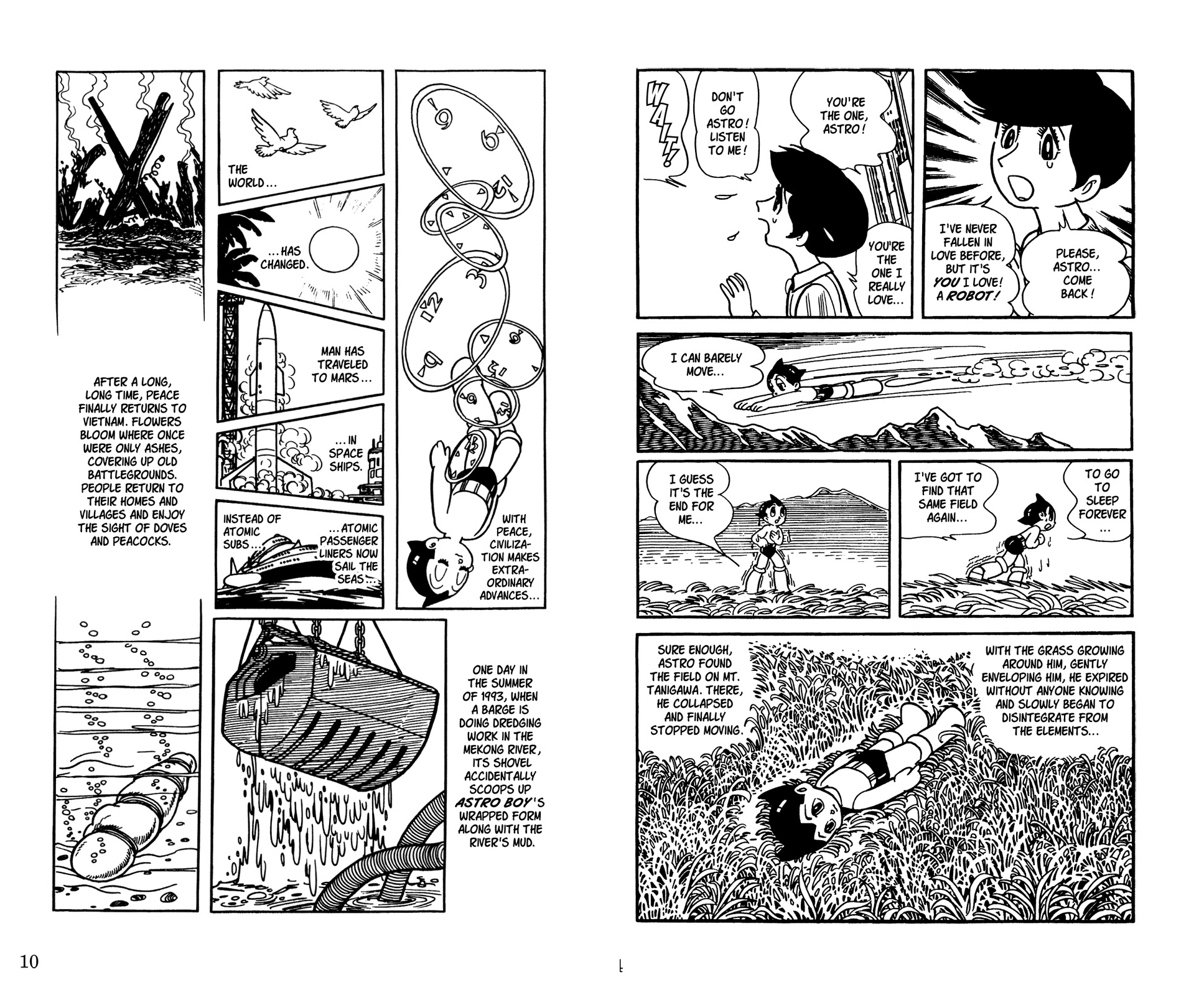 Volume seven of Osamu Tezuka’s original Astro Boy comics translated by Frederick L. Schodt continues directly on from the end of volume six, with the second of three parts of an epic adventure called ‘“Once Upon a Time” – Astro Boy Tales, Part Two’.

When last we saw Astro Boy he had gone back in time fifty years to 1969 and was in Vietnam, sinking into the Mekong River, exhausted of all power. In ‘The Summer of 1993’, it’s 24 years later. Vietnam is at peace. The world has changed, space ships are travelling to Mars and a river barge scoops the dormant robot boy up from the water. Back in Japan a revitalised Astro tries to find his place in this newer Tokyo but it’s still very far from his own time and he is still too advanced for the technology of the nineties. In ‘Robot Chiruchiru In Danger’, and ‘Astro’s Energy Runs Out’, he finds a new friend, starts battling for the rights of robots, fights a few villains and then once again exhausts all his power. While he lies quietly rusting in a field, time continues to move forward until it’s the 21st Century.

In ‘Dr Tenma’, we see again how the death of Tenma’s son Tobio leads to the creation of a new Astro Boy to replace him. But he can’t be animated because unknown to Tenma another Astro, although rusted and deactivated, already exists in this timeline. Two Astros cannot both be active in the same instant. How can this time paradox be solved?

In this alternate origin for Astro Boy all the previous details are the same, but now we see his creation story in much greater detail, and a lot of that detail is surprisingly harrowing. ‘The Tragedy of Bailey’ has a new Astro learning about his powers, the world and the awful conditions that robots exist under. There’s a terrible ending for the first robot to gain legal rights, and then the always flaky Dr Tenma loses it completely. Despite the best efforts of Astro’s ‘mother’, Mrs Tenma, he sells his creation in a drunken rage and ‘Astro goes to The Circus’.

Tezuka’s masterful storytelling is at full power in this volume as he cranks up the philosophical and moral dilemmas to even higher extremes than in previous stories. The sheer meanness of the angry anti-robot humans and outrageously unfair Dr Tenma seem bad enough for poor Astro, until the astonishing sadism of the villainous circus master, Mr Hamegg, tops them all with dreadful and truly Dickensian levels of cruelty. The ending of this Part Two is perhaps even tougher than the end of Part One and the last page is a heart-rending image that will distress the sturdiest reader.

While this is still nominally an all-ages book, with the quite extreme suffering Astro experiences in this volume, plus all the human and robot deaths and the bleak ending, it isn’t the best bedtime reading. In fact it may be best to skip this volume altogether for sensitive younger children and take up Astro’s story again in the next book.