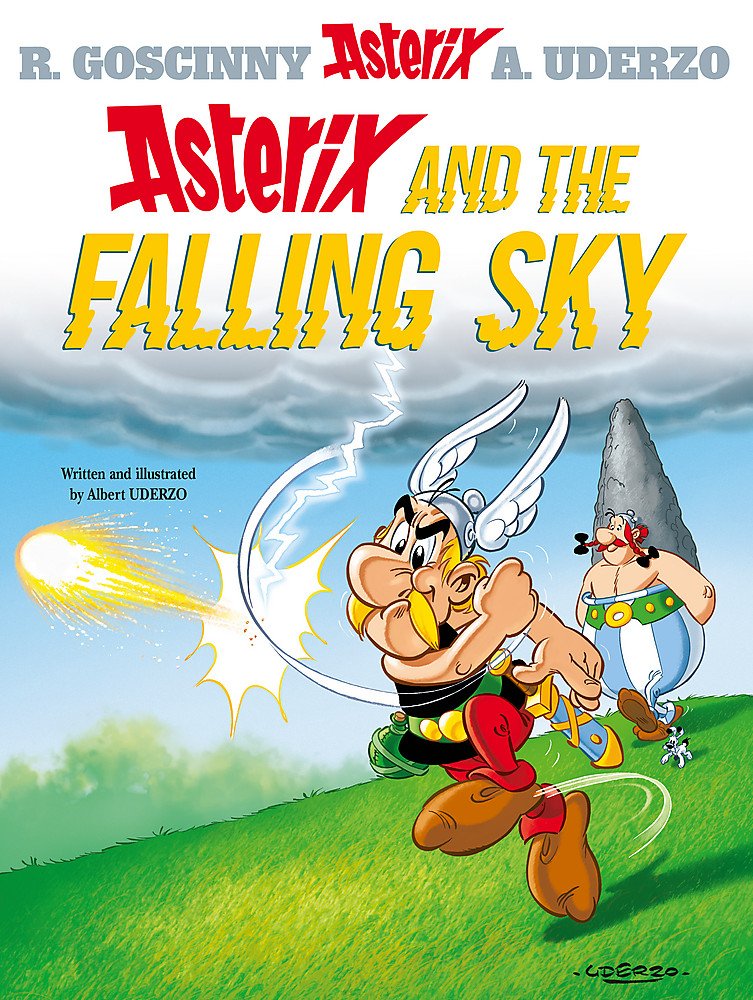 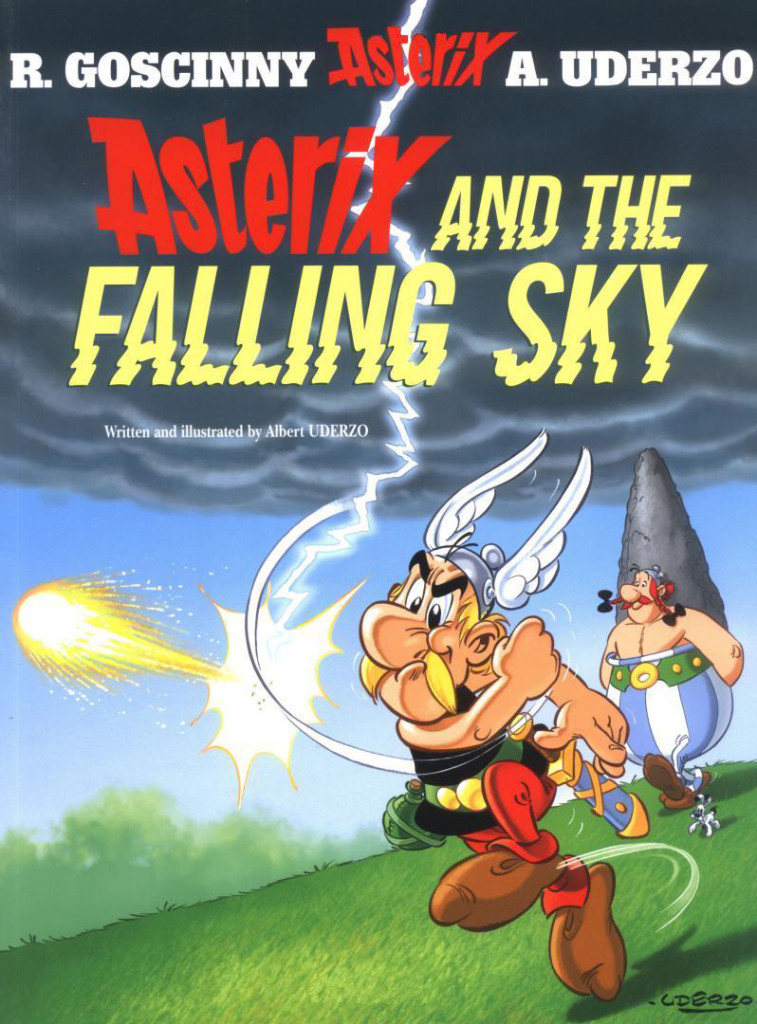 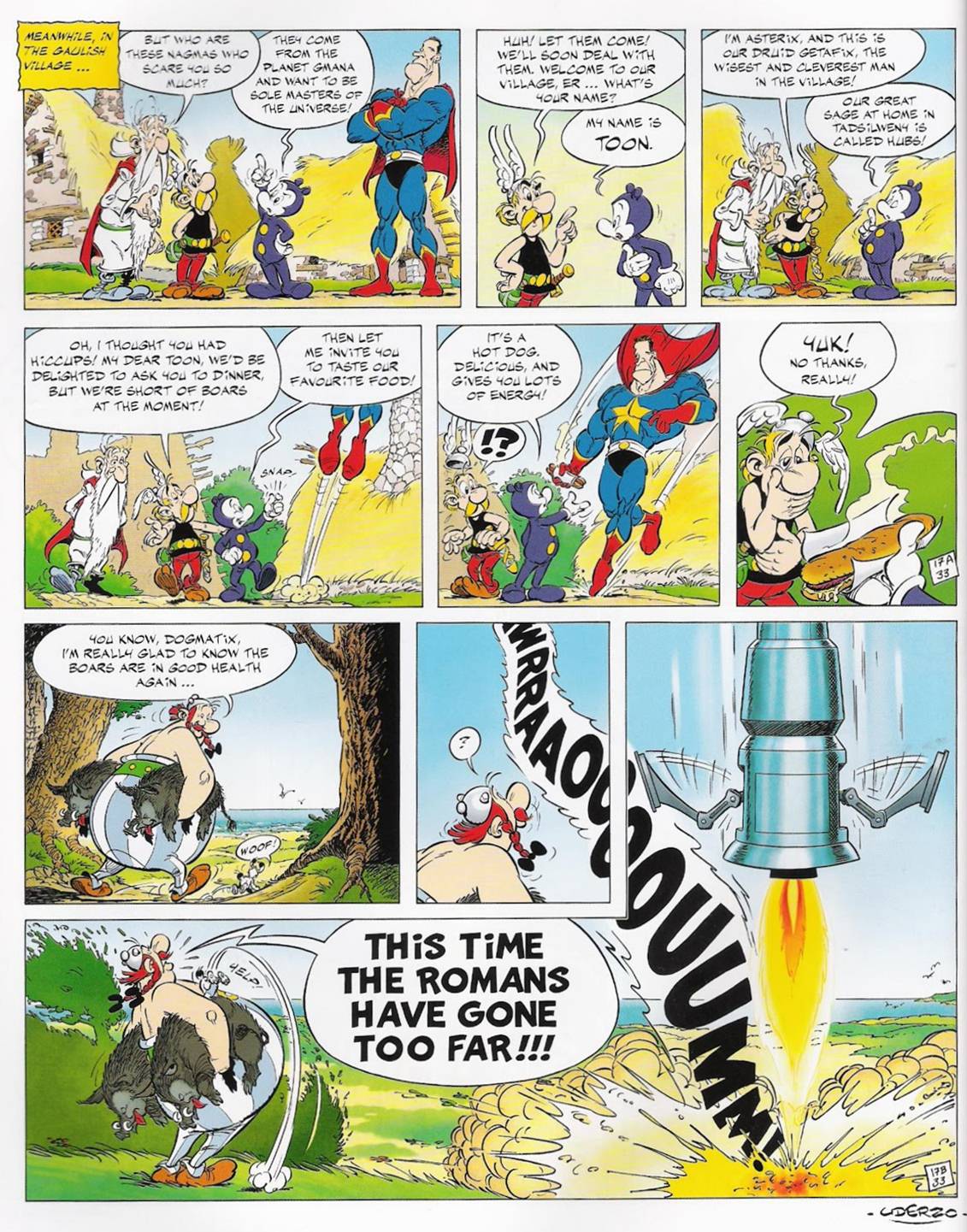 Asterix and the Falling Sky is the 33rd Asterix book, and the ninth to be both written and illustrated by artist Albert Uderzo. In what was a massive, and unpopular, departure from all the other Asterix books, this is a science fiction story involving two alien races both hoping to acquire Getafix’s magic potion to give them an advantage in their deadlocked arms-race. The Tadilsweny race, represented by Toon, look like soft toys. The Nagmas, based upon Japanese manga characters, are more aggressive in appearance, and look like big armoured insects.

With this confused and pointless tale, Uderzo was attempting to say something about the invasion of American and Japanese comics into the European marketplace. However, it’s never quite clear what he’s actually trying to say, unless it’s that the plucky Gauls will win the day yet again (hardly a revelation for an Asterix book, where every adventure ends with a celebratory banquet). The Tadilsweny security force are clone warriors who dress like Superman, wear Green Lantern’s ring, and, strangely, have the body and head of Arnold Schwarzenegger. They are also available in bat and spider versions, just in case you’re not getting the subtle cultural references. Schwarzenegger, an Austrian, is a strange choice, though one could argue that he represents all that is loud and crass about American culture.

Or there’s not really that much thought going into the plot or its themes, and Uderzo is just randomly tossing in elements from assorted sources, particularly manga and anime that were popular in France at the time. Many of which, being Japanese, were probably bonkers to begin with. And, just to complicate matters, he was also criticising the Bush-led invasion of Iraq in search of never-found weapons of mass destruction. It’d be fair to say that Uderzo’s reach, as a writer, exceeds his grasp, nowhere more obviously than in this adventure. So the plot is awful, as is most of the writing, with Uderzo stooping to the level of using anagrams. Most of them are painfully dumb (Nagma for manga, Hubs for Bush) or downright stupid: Tadilsweny is an anagram of Walt Disney, to whom the book is dedicated. For a series that always excelled at smart, if sometimes tortuous, wordplay (often so clever that readers without the necessary Latin would miss jokes) it’s a big step down to clumsy anagrams.

That’s the writing, what about the artwork? This is a nice looking book. But. And it’s a big ‘but’ (insert your own joke here). The artwork, though polished (if less detailed than before) commits the egregious crime of just not looking like Asterix, and the whole book feels like an adaptation. Notably, the inking is credited to Frédéric Mébarki, who does a fine job, really, but he’s not Uderzo, even if he was inking Albert’s pencils. The same problem would dog later efforts too. Hergé always maintained there would be no Tintin after he was gone, and wisely admitted that while it may be better or worse than his efforts, it wouldn’t be Tintin. He was right.

This won the 2006 Eagle Award for Best European Comic, but one imagines this was either on account of the love many readers have for these books, or out of respect to Uderzo. This is a truly awful sci-fi story that doesn’t even look like an Asterix book.