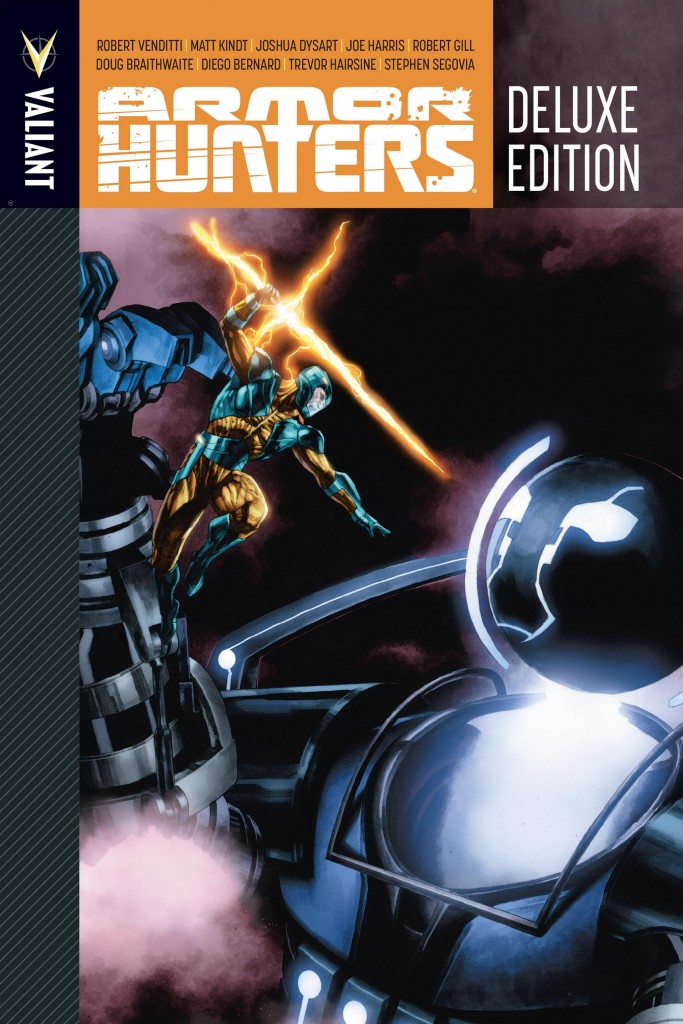 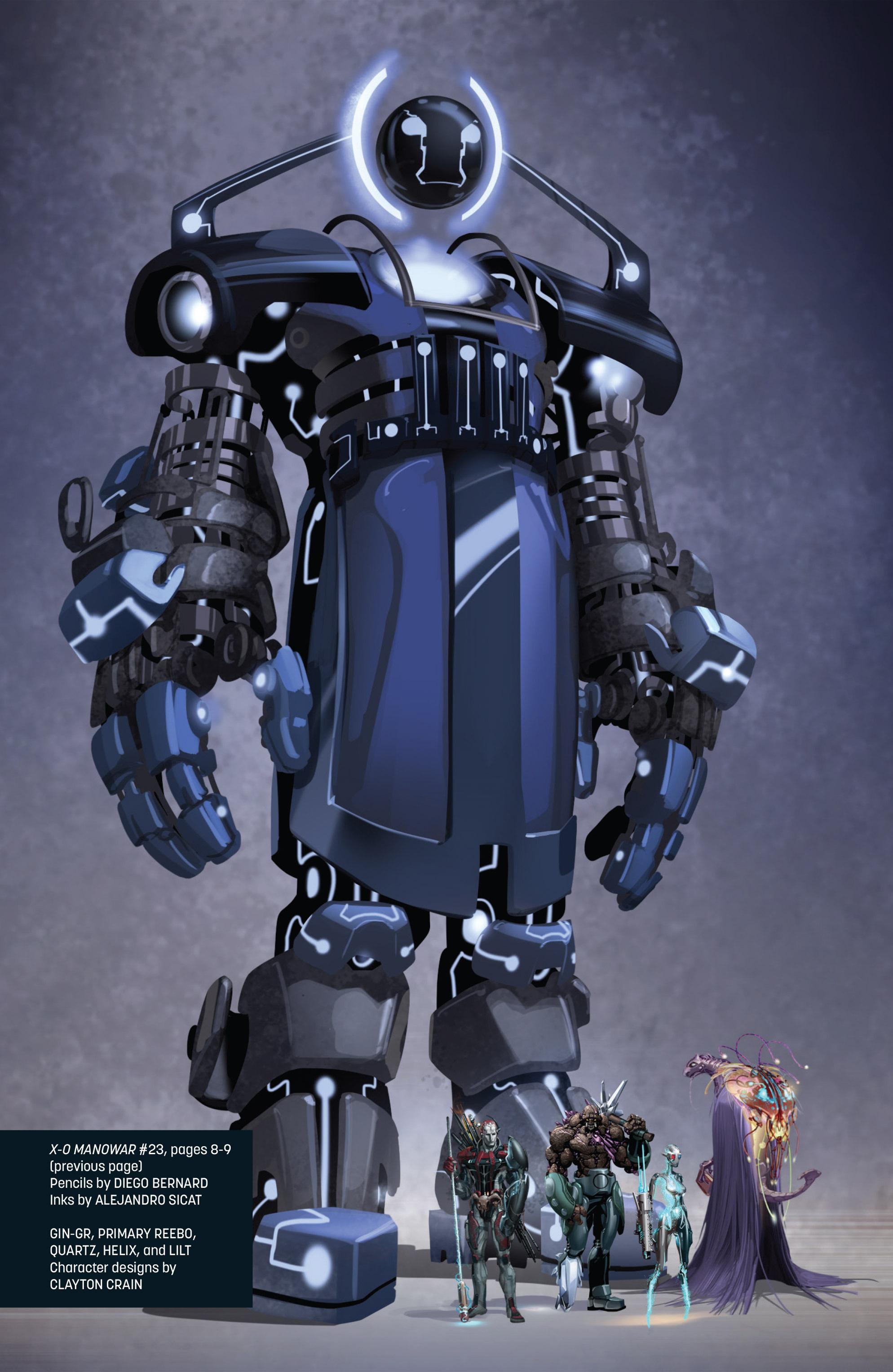 At over 500 pages of oversized gloss stock in hardcover, there’s no doubt that this lives up to the Deluxe Edition designation. Within, it encompasses what was previously issued as six paperback graphic novels and some extras.

The fundamental issue is the alien armour acquired by Dacian warrior Aric in the early days of the X-O series. Known as Shanhara, it possesses a form of sentience and chose to bond with Aric having rejected many others. He’s unaware of it as anything other than a gift, and it enables a warrior from 400AD to hold his own in the 21st century where he now finds himself. Out in the wider reaches of the universe, however, there are a group of aliens dedicated to hunting down and destroying every existing piece of armour, as they’ve seen it devastate entire planets before moving on. As the chapters are presented as chronologically published, the story of the Armor Hunters is rolled out in segments separating the present day action as they arrive on Earth.

As writer of both the Armor Hunters and X-O series it’s presumably Robert Venditti responsible for the overall structure, with contributing writers Joshua Dysart, Joe Harris and Matt Kindt working the characters they write within that. Running the chapters in the order they were originally published rather than grouping them by title provides a more engrossing read than the original paperbacks’ more concentrated doses. It provides a perception of a global event perpetuated by by relatively few participants. The exception to the running order being beneficial is the Harbinger chapters, which tell a compressed story over a short time, and that doesn’t benefit from being separated by several other events.

Crucially, the Armor Hunters don’t bother explaining themselves on arriving in Earth’s orbit, they just issue demands before destroying Mexico City, which is a convenient piece of plotting that sets the remainder in motion. It’s a weak peg, but expands into some thrilling chapters, all the best of which are written by Venditti. Too much of the remainder has the feel of scrabbling around the edges without truly integrating.

Assorted artists contribute, and while some have conveyed strengths, Diego Bernard and Dougie Braithwaite stand out. Both are great storytellers who don’t short change on background detail, nor falter with their action sequences. By and large there’s nothing wrong with the pages supplied by Cafu, Robert Gill, Trevor Hairsine and Stephen Segovia, but they don’t match the quality of Bernard and Braithwaite.

Ambition certainly isn’t lacking overall, and the result is an event that’s big, dumb and fun, with the qualifications that it all hinges on a plot convenience, and some of the detours don’t match the main plot. This being the case, perhaps X-O Manowar Deluxe Edition 3 is a better bet as it offers almost all the essentials, although rather mystifyingly omits the touching aftermath.

The final thirty pages are filled with assorted designs, pin-ups and process material, with Clayton Crain’s complicated character designs for the Armor Hunters very impressive (see featured art). Anyone considering buying this now out of print book is advised to steer clear of the ludicrous prices being asked on Amazon USA as it’s reasonably priced elsewhere. Alternatively the really necessary portions of the story can be found in just three paperbacks, Armor Hunters, X-O: Prelude to Armor Hunters, and X-O: Armour Hunters. Coincidentally, these also feature the best art. Armor Hunters: Bloodshot, Armor Hunters: Harbinger and Unity: Armor Hunters tie in but are more in the way of diversions and aren’t as good as the remainder.