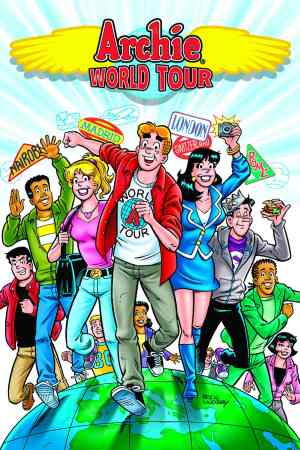 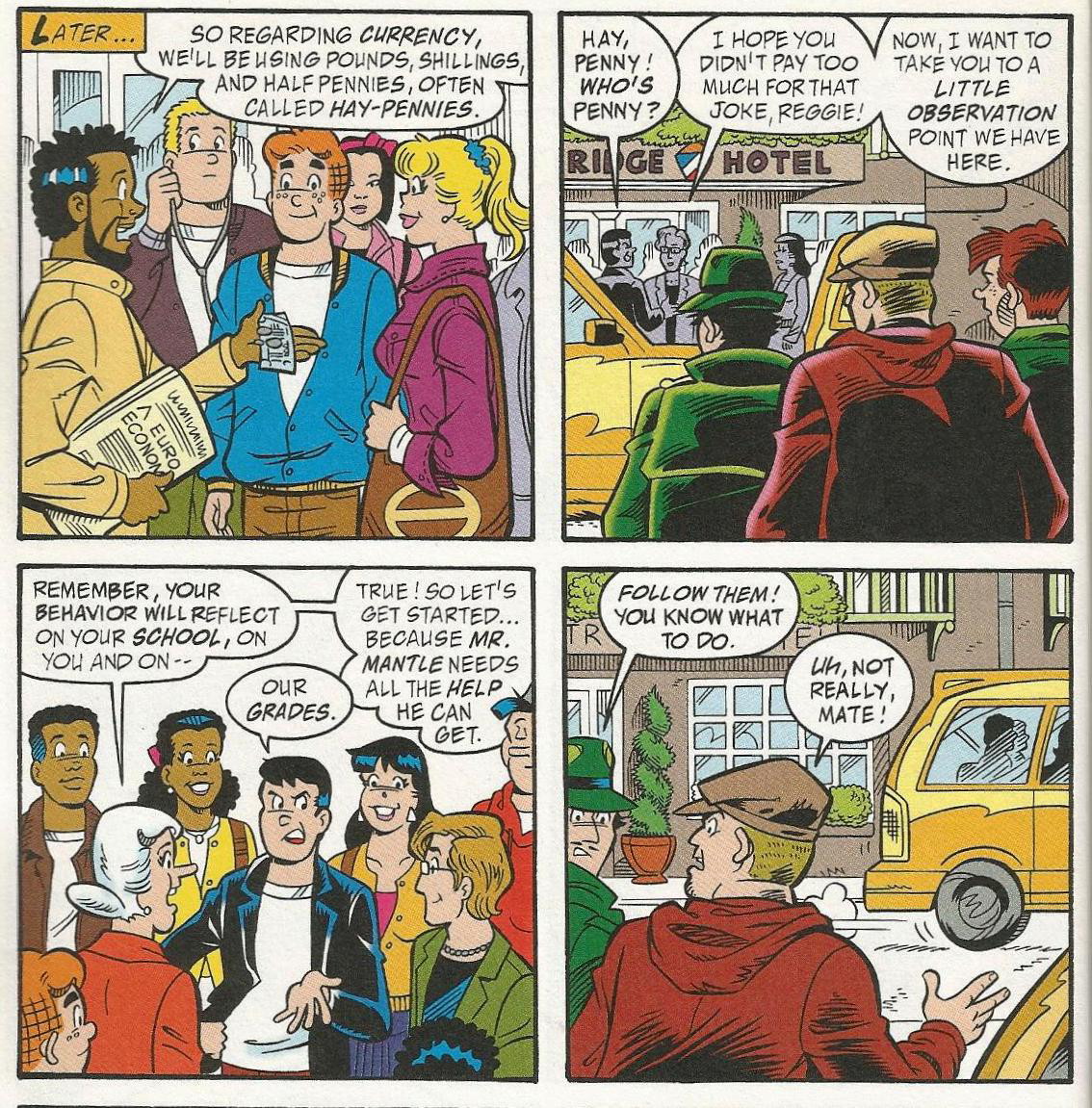 Archie and the gang are on a school trip, visiting five foreign cities in ten days; their first stop is London. And right there is where the problems start. Because the gang are assured that here in England, instead of dollars and cents, we spend “pounds, shillings, and half-pennies”.

Why is this irksome? Put it this way; how would our American chums feel if a British writer depicted a tour group in 2008’s New York, the original publication date of these stories, using subway tokens (obsolete since 2003) to go to visit the twin towers of the World Trade Centre (famously destroyed in 2001)? They’d be miffed.

A couple of fascinating facts for this story’s writer, Alex Simmons: The half-penny, or ‘ha’penny’, ceased to be legal tender in 1969, a scant forty-odd years ago. The shilling as a unit was also eliminated in 1971 when the country, grudgingly, embraced decimalisation, though shilling coins circulated as ersatz 5p pieces until 1990. That’s only a quarter of a century ago. Mr. Simmons might want to consider buying a more recent encyclopaedia.

Mr. Simmons evidently doesn’t have Internet access, or else all of two minutes’ research would have prevented these errors. He also doesn’t have a library card, otherwise the old-fashioned, but still effective, method of Going And Looking Things Up would have occupied, maybe, what? An hour, an hour and a half of his time? And he has clearly never been to the United Kingdom. Or met anyone from it. Ever. His entire knowledge of our history and culture seemingly seems gleaned from the authoritative source of the Austin Powers movies.

Okay, you’re foolish if you expect realism and 100% accuracy from Archie Comics; they’re entertainment, not documentaries. But when the blurb emphasises the credentials of the writer as an educator, and he mucks things up in such a clumsy manner, you can’t help but wonder how effective he was in his academic career. (“Sure, just wrap that used plutonium in clingfilm and stick it in your back pocket. What harm could it do?”)

Other chapters of this ‘World Tour’ take Archie and the gang through Madrid, Nairobi, Rome and Switzerland, on the trail of, and pursued by, sundry mysterious individuals. Lack of extensive knowledge of those countries precludes comment on the accuracy of their portrayal, other than to observe that the itinerary of our teenage protagonists – England, Europe, Kenya and back to Europe – seems impractical and costly. One wonders if Mr. Simmons is aware that Nairobi is not, in fact, in Europe?

Illustrator Rex Lindsey is one of the more proficient practitioners of the Archie house style, and the adventurous nature of this story plays to his strengths, with lively chases and slapstick mishaps a’plenty.

Included is a reprint of a previous visit to London by the pop group The Archies, in which they record at Abbey Road. Also illustrated by Lindsey, scripted by Hal Lipson, it manages to mangle the UK dialects enough to be offensive, but at least it’s not an outright parade of ignorance. A cover gallery of the gang’s earlier foreign trips rounds out the volume.