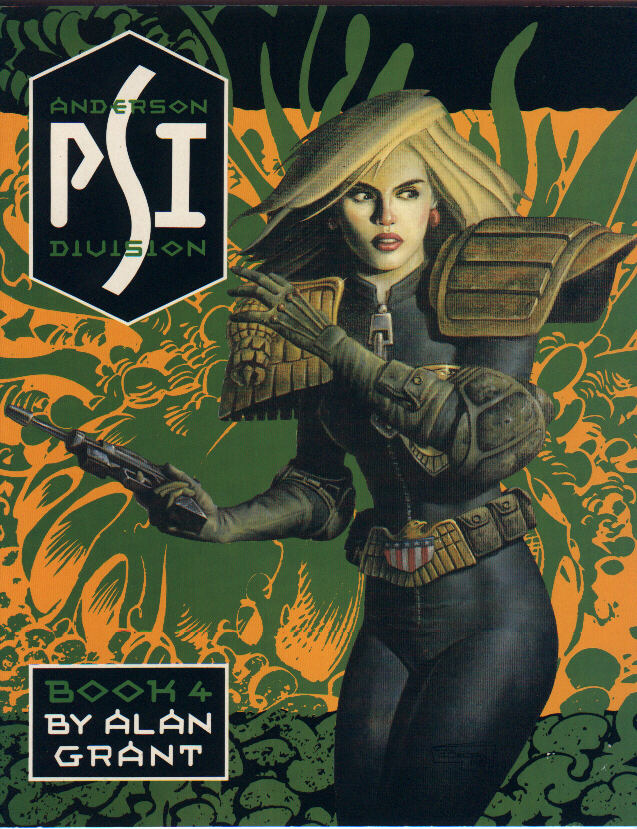 With the fourth of these slim Titan Books editions collecting the doings of Mega-City One’s most adept Psi-Judge the internal art finally begins to match the quality of the cover portraits, although only writer Alan Grant is credited on the cover.

Ian Gibson’s initial colour pages are rendered in black and white (restored when included in Judge Anderson: The Psi Files Volume 03). His is a slim, if tragic story of alien parasites, incidental to the remaining content, but very nicely illustrated in his imaginative cartoon style.

‘Helios’ forms the bulk of the collection, Grant picking up from a Judge Dredd story (also included), in which a Mega City citizen is transformed into a lizard man, mystifying the Judges. “If it was chemical, it left no trace”, offers the forensic department, “and we had a Psi give him the once-over – nothing”. It’s a stylish artistic outing from Barry Kitson, with Anderson unseen, but she and new artist David Roach continue the investigation in the main story.

It introduces Anderson’s friend Judge Corey who’ll have a great impact on her future path, and picks up on the mystery of someone genetically tinkering with people. Grant’s captions dealing with this have a suitably creepy tone, and Anderson is drawn into a rage-fuelled plot of revenge. Roach’s introduction mentions Dredd sometimes being incidental to stories under his name, yet Anderson is never far from centre stage. Grant has her investigation running parallel with the murky doings of financiers and medical experimentation. It’s a clever crime story elevated by Roach’s elegantly precise art. His introduction mentions drawing on Brian Bolland for inspiration, as Anderson’s earlier artists have done, but Roach’s borrowing is more technical, bringing in the light and shade along with the inking style, while providing his own imaginative layouts. It’s a notable outing for Roach on his first continued strip.

The ‘Helios’ story is also found in Psi Files 001, but although Roach drew more Anderson (see Psi Files 002), Book 5 jumps to Arthur Ranson’s first work on the series. These stories are also found in the hardback Judge Anderson: The Possessed, part of the Hachette’s Judge Dredd partwork series.