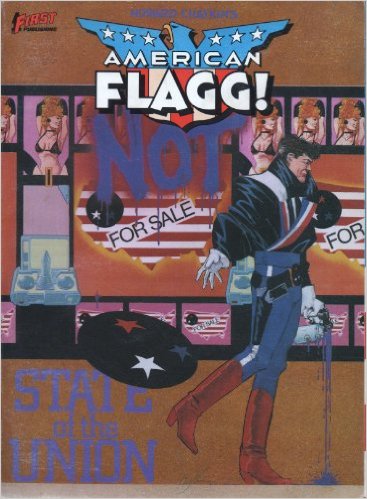 Howard Chaykin’s American Flagg! immerses the reader in a near future world where firefights are covered as TV entertainment and a financially and morally bankrupt America is for sale to the highest bidder. Force fed pap by the media, controlled by a heavily-armed private police force also owned by big business, Chaykin’s dark space opera shows us a world where America is no longer a super power, and all the smart money has moved to Mars.

Arriving on Earth the perplexed new Plexus Ranger, Reuben Flagg, cannot help but meddle with the status quo and as the series progresses finds himself getting deeper and deeper in illegal activities necessary to bring any kind of order to the world surrounding him. Having been the star of a soft porn adventure show on TV himself, and understandably disgruntled at being replaced by a holograph, Flagg joins the real Rangers and finds himself dropped into this confusing world where everyone is on the make, or so it seems. In Southern Comfort Flagg inherited an illegal underground TV station, which tries to counteract the subliminal-laced network shows that keep the population amped up on violence and sex. Here he finds himself in anarchic Canada, which allows Chaykin to tap into a whole range of new Americana images associated with cowboys and good-time girls, while back in Chicago several of Flagg’s intimates are involved in a campaign for the next Mayor, in which the political back-stabbing is literal.

Visually Chaykin’s near future is a rich tapestry indeed, full of signs and screens and snippets of TV shows. Inventive lettering, and the use of zip-a-tone to give everything a slightly grimy edge, creates a vision where the imagery tells much more of the story than is common in comics. It’s a technique Dave Gibbons and Alan Moore would lock onto with Watchmen. However, by this stage Chaykin’s interest in the series had already started to wane. There are signs of repetition, the new characters are not as sparkly and gripping as some of the old ones, and the strain on credulity becomes greater.

American Flagg! is a series to immerse yourself in, without too much thinking; even a vague knowledge of science and history will show you that Chaykin’s future is unlikely, if satirically satisfying. Little nuggets of history dropped here and there in the first few issues don’t add up to a whole, and after a couple of years the strain of keeping it exciting while developing some of the very casually conceived plot threads is beginning to show.