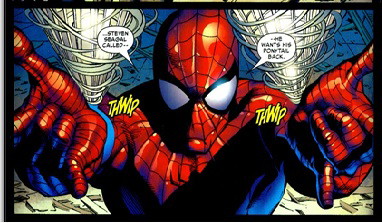 When originally printed, chapters of The Other crossed between three Spider-Man titles as a way of promoting a newly-launched comic. With marketing-led crossovers a contributory factor in Spider-Man’s declining standards during the 1990s this was a brave move.

Three writers worked on the story, but the central plot would appear to be attributable to J. Michael Straczynski on the basis that it ties into his theme of Spider-Man’s origin being totemic rather than chance. Peter David, Reginald Hudlin and Straczynski each write a quarter of the story, with each then writing a chapter of the final quarter. While they mesh very well, the same can’t be claimed for the art. Mike Deodato’s naturalism, Mike Wieringo’s more stylised approach and Pat Lee’s stiff animation gloss make for an extremely uneasy mix. While Spider-Man can absorb contrasting styles, why should they be part of the same story?

Among the finer elements of this volume are sociopathic villain Tracer sharing a sandwich with Aunt May, a sentimental use of Doctor Doom’s time machine, a dialogue about Spider-Man having a death wish due to survivor’s guilt, a Wolverine moment, the growing friendly relationship between Peter Parker and Tony Stark, and a Spider-Man battle as experienced by Mary-Jane.

Balancing that are the story elements that make little sense, or just drift. The return of Morlun should have been an event after his excellent predatory role in Coming Home, but his best moments are menacing scene-setting interludes, and the eventual bloody and violent confrontation has little purpose beyond shock value. Spider-Man living under a death sentence is dragged out, although explaining why the marvels of his environment will have no impact is well handled. The biggest problem, though is that the transformative moments of later chapters have no basis other than faith. That’s perfectly acceptable when it comes to cerebral material such as Spider-Man repressing elements he should have embraced to make him more effective, but associated physical manifestations are left unexplained. Mary Jane’s arm is broken, yet by the next chapter it’s fine. Moving down the scale of detriment, sometimes the dialogue is little too smug, with David the prime culprit. When lines about Kafka have to be qualified with “Oh. You got the reference. Good”, perhaps they’d have been better omitted in the first place.

Spider-Man finishes The Other invigorated with several new abilities, most of which were promptly forgotten. Were the contrasting art not so problematical then the good would outweigh the bad, but as it is… This is also available as part of Amazing Spider-man by JMS Ultimate Collection volume 4.