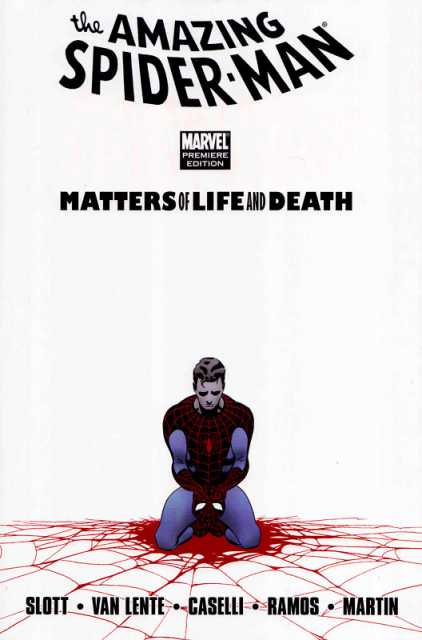 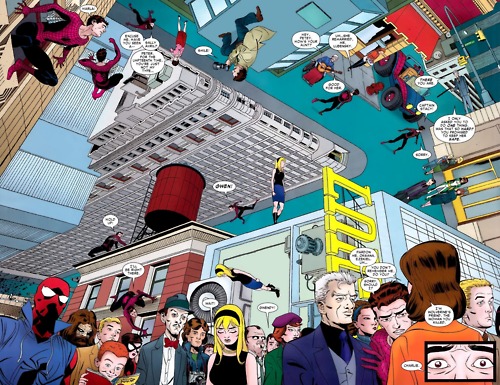 Peter Parker’s life is on the up. His new job is with a company that values him, lets him keep hours that suit, pays well, and provides him his own lab, which is very useful for those rapid costume changes. And what happens whenever Peter Parker’s life is going well? Right. Hence the ‘death’ in the title.

It’s not someone who’s that close to either Parker or Spider-Man, but there is an emotional impact, and it’s a debate-opening issue. Deaths in comics are often a cheap device. If it’s a super-powered character it can be pretty well guaranteed they’ll be back at some stage, but when it’s the non-powered supporting cast the reverse odds are equally likely. So, you have character A, who’s someone who adds value to a series overall, but the death of any character spikes sales, so what’s more valuable? The prevailing view appears to be that the sales spike takes priority because another non-powered character can always be created. That’s the cynical version. It could also be argued that in a world populated with beings lacking a conscience regularly rampaging through New York in material with a gloss of realism otherwise, how realistic is it that no-one ever dies?

Dan Slott’s story leading to the demise is a decent one, with new and improved Spider-Slayers this time not concentrating on Spider-Man, but on J. Jonah Jameson, now Mayor of New York, and the man who financed the construction of the original model. Stefano Caselli’s upgrades for those and for the Scorpion are jagged and imposing, creatures that scare.

Marcos Martin’s delicate pencils, graphic sensibilities and interesting layouts are very welcome for most of the remaining content. It deals with a Spider-Man who’s lost something integral to his abilities. He’s been unaware of how much he relies on this trait, and his effectiveness is compromised without it. It’s a well-presented insight into what makes Spider-Man as he attempts to resolve a hostage situation engineered by a deadly foe. Before that, though, Martin delivers some stunning imagery to accompany Spider-Man’s self-analysis via dream sequence.

There’s also a story looking in on Flash Thomson’s recovery from severe injury and being given an opportunity others might turn down. It’s a well-worked dilemma from Fred Van Lente, drawn by Humberto Ramos, here reining in his distortions. Several artists contribute to Spider-Man’s fond recollections of the Human Torch, then presumed dead. It’s a humour-oriented chapter with decent art from Caselli, Martin, and Ty Templeton, channelling Bryan Talbot in places. Nuno Plati’s animation gloss is interesting, but his super-stretched figures are ghastly.

The content is also available within Big Time Ultimate Collection vol 1, and the Human Torch element leads into the next collection, The Fantastic Spider-Man.