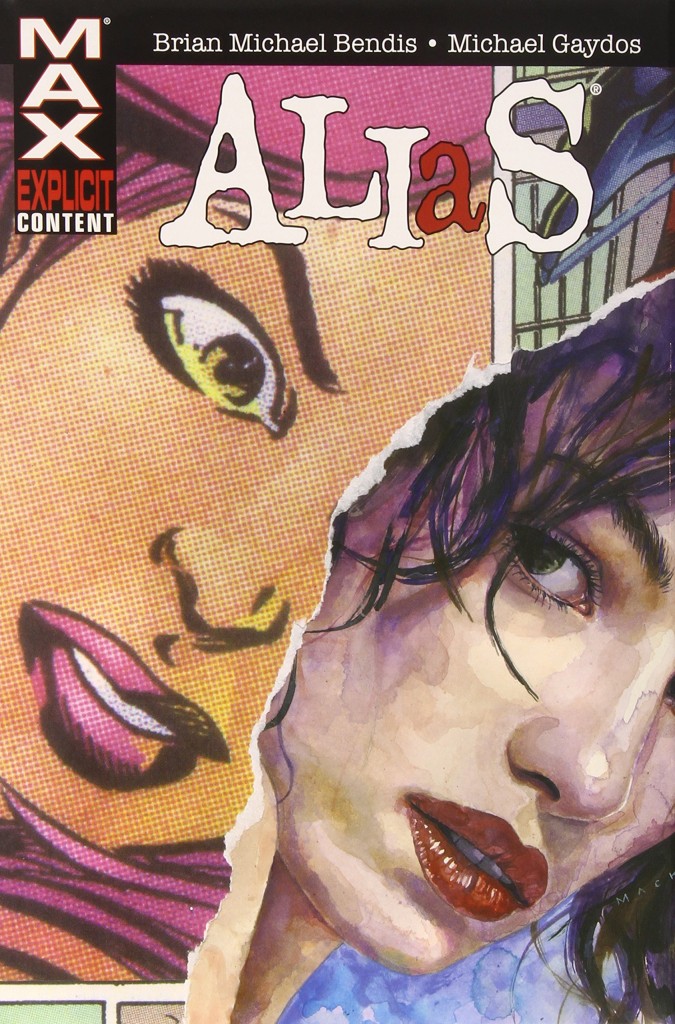 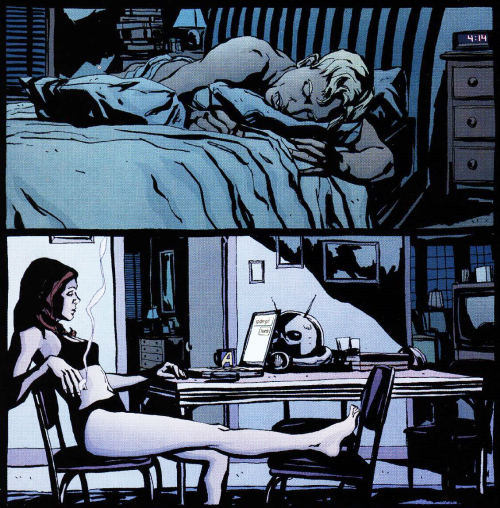 With Jessica Jones now the star of her own TV series, for those that can afford it this is the format to sample her solo series. At the most prosaic level, the problems of the four paperbacks it collects are avoided by ensuring art and dialogue spread across two pages doesn’t disappear into the central gutter. Then there are numerous extras including two stories not in the trades, and the bonus material includes Bendis’ pitch for the series, which is a fascinating read in itself.

Jessica Jones had been a superhero, but that’s now long behind her, and she’s pushing the self-destruct button while earning a living as a private investigator. Writer Brian Michael Bendis began his comic writing career with crime stories, but he’s now more experienced, and in the Marvel universe he has a convincing backdrop he doesn’t have to create from whole cloth into which he can drop Jessica, delivering her as someone with a past and connections.

Over the course of the series Bendis delivers plots encompassing everything that the reader of a crime series wants: investigations with mystery, tension and variety, but his story is Jessica herself. It’s only in the final chapters that it’s revealed how she became so fractured, and a truly horrifying story it remains. Before then we witness her fears, her irrationality, drunken liaisons and an almost pathological urge to eradicate any relationship before it has an opportunity to develop. This is all characterised via Bendis’ prodigious facility for naturalistic dialogue. Yes, at times he’s carried away and unable to press the stop button, but balanced against the wonder of the full on-form flow, why pick?

Most of the series is illustrated by Michael Gaydos. There’s an initial awkwardness as he struggles to cope with the sheer volume of dialogue, but his dank, shadowy style is exactly what’s needed to establish the milieu. He’s admirably unconcerned about stepping out of his comfort zone, painting one chapter in watercolours, an unsuccessful experiment not repeated, and illustrating another as a homage to Steve Ditko’s Spider-Man. Mark Bagley also contributes, supplying pages that flashback to Jessica’s superhero career, and there are illustrations incorporated from David Mack and Bill Sienkiewicz.

In addition to the four Alias paperbacks, individually volumes 1-4, or in earlier printings Volume 1, Come Home, The Underneath and The Secret Origins of Jessica Jones, there are two other stories gathered here. ‘What If Jessica Jones Joined the Avengers?’ is an alternate world scenario, slim and negligible, despite being the work of Bendis and Gaydos. Half the story is recap, and under the circumstances having Bendis himself as a character relating the events is an insulting indulgence.

Far better is the creators revisiting their character ten years later, presenting her with a near impossible mission and hinting there may be more to come. We’ll see.

Alias was released under Marvel’s Max imprint where creators were able to utilise levels of adult content well beyond standard Marvel material. In the earliest chapters this is most obviously represented by the profusion of swearing, but as the book continues some very bleak and nasty areas are examined. If you’re the type to be offended by this, stay well clear.

Everyone else will experience a generally first class character study, decently drawn and coupled with several intriguing mysteries.