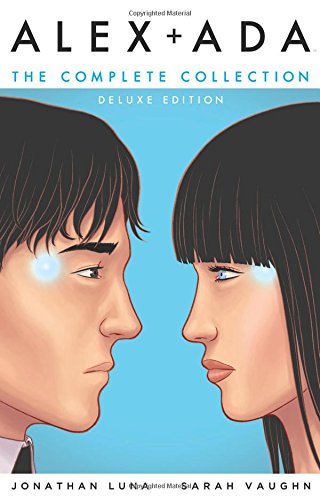 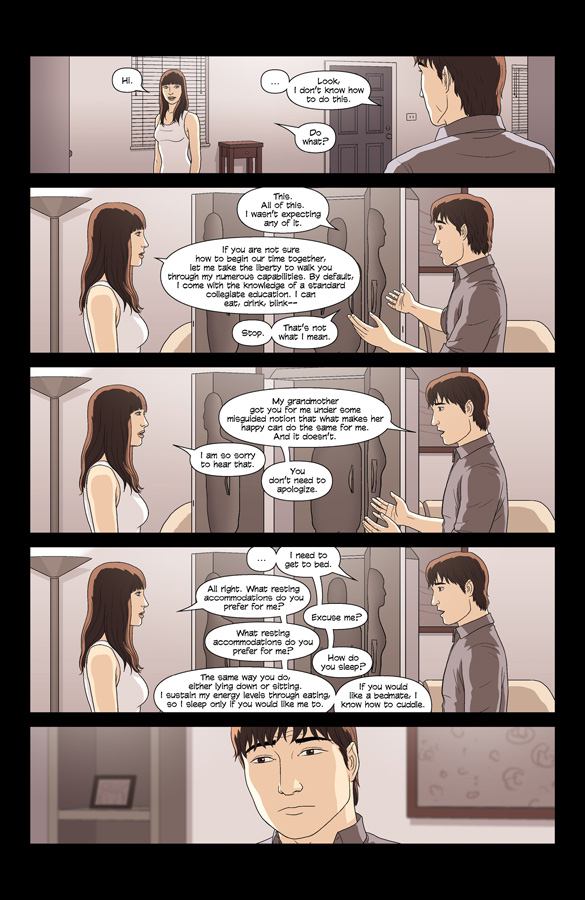 In the near future Alex is still moping seven months after breaking up with his girlfriend. Attempting to cheer him up, his grandmother sends him a pleasure android, having enjoyed the company of one herself. Alex has a different temperament, and although Ada is programmed, not sentient, he can’t abide the thought of a living being as subservient, and learns of a method to circumvent this.

Alex + Ada is an extremely frustrating series. It introduces good ideas then almost wilfully neglects to cultivate them. Some are considered in passing, and very occasionally others are aired to tedious extreme. Early in the book there’s a scene set in a virtual reality conclave and it reads as if the notes from a lecture. There is no middle ground. Furthermore Alex + Ada is an emotionally sterile series, rarely convincing regarding anyone’s character, much less with the passion supposedly engendered in Alex. Much of this emanates from the manner in which co-writer and artist Jonathan Luna chooses to tell the story. He has a superficially attractive style that falls to pieces when examined. He loves repetition. This is of images, or of scenes, or narrative pauses indicated by holding the viewpoint on the same scene for multiple panels while very little occurs. His people are static and posed, their expressions fixed rather than realistic, and while his environments are lovingly created, populating them is another matter. There’s never anyone included in a scene who doesn’t speak at some point, convincing that all the graphic novel’s a stage.

While briefly novel, primarily for the primitive animated movement the method has when read digitally, this accumulation of pauses and repetition slows the narrative to glacial pace. At the midway point the ground shifts as sentience in androids is designated as illegal in response to public fears. Ada must now conceal her revised personality under threat of being deactivated. It adds a little more tension to matters, but the book only really comes to life as the end approaches and time compresses. We still have an Alex whose stoic depiction is totally at odds with the emotional dialogue supplied by Luna and Sarah Vaughn, but the finale is worthwhile.

Alex + Ada is very much a story of what might have been, a victim of style dictating content.