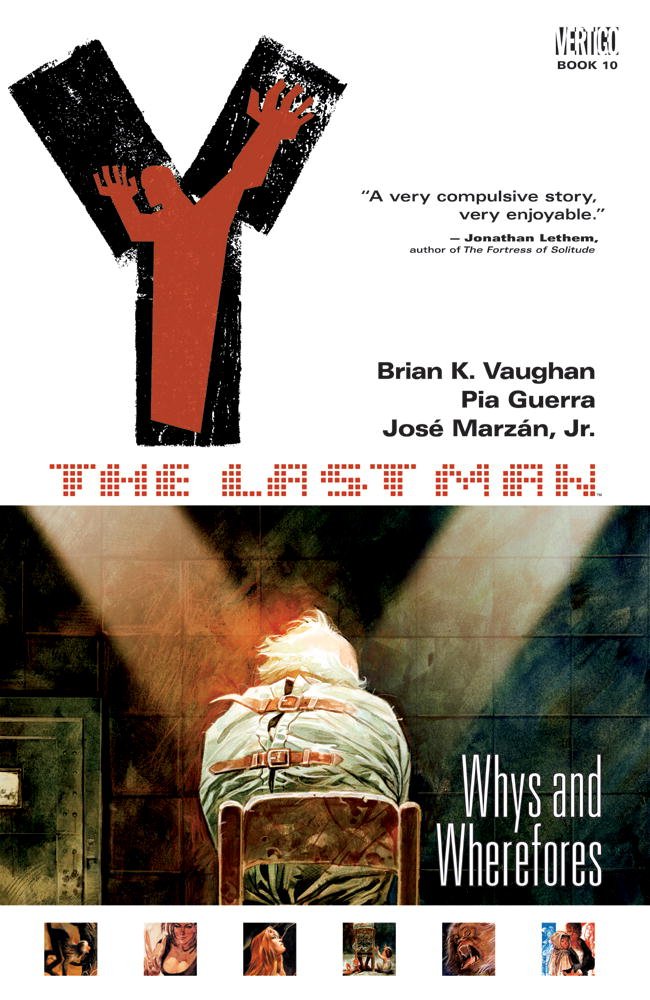 There was a parting of the ways in Motherland, and it’s only Yorick, Ampersand and Agent 355 heading to Paris to meet the woman Yorick intended to propose to before every man on Earth was killed. She’s travelled there having undergone a shamanic experience revealing that Yorick is still alive, and will meet her in Paris.

Beth Deville isn’t the only person in Paris connected with Yorick, though. Others have made their way there from the USA, and are pursued by the single minded Alter, who believes that if there are men remaining on the planet it’s her duty to ensure they’re under Israeli care. Her methods have long been reprehensible, and let’s just say there’s no great change of heart here.

Whys and Wherefores concludes Y: The Last Man and surely everything we need to know about the cast has now been said, yet even in the run-in Brian K. Vaughan keeps the surprises coming. Midway through there’s possibly the best yet, as the world’s longest dangling conversation is finally completed, and for the concluding chapter there’s a sixty year leap into the future, which won a Harvey Award for Best Story. The surprises are great, but the solidity giving them value throughout the series is Vaughan’s capacity for funnelling the dramatic soap opera elements. There’s always been that tantalising hint, that little nudge, that nagging unresolved question to drag the reader into the next chapter, then the next book. It’s been a masterclass, and one Vaughan’s continued with Ex-Machina and Saga.

Pia Guerra has been equally dependable throughout, never over-stated, always able to convey the moment, exceptional at breaking down a story that depended on dialogue, and thoroughly under-rated. Her combination with Vaughan re-defined the concept of TV-style drama in comics, and it’s rather surprising that all attempts to transfer the series to moving images have failed.

So wherefore the end? Well, you don’t really want to know, do you? It’s bittersweet and won’t please everyone. But proper endings rarely do. So let’s leave it with a last pithy piece of wisdom, in fact chronologically Yorick’s last words “Just go out there and get your heart broken in, so it’ll be ready when you really need it.”

The content of this volume has since been re-issued combined with the preceding Motherland as Y: The Last Man Deluxe Edition volume five in hardback, and in paperback as the forthcoming Y: The Last Man Book Five.