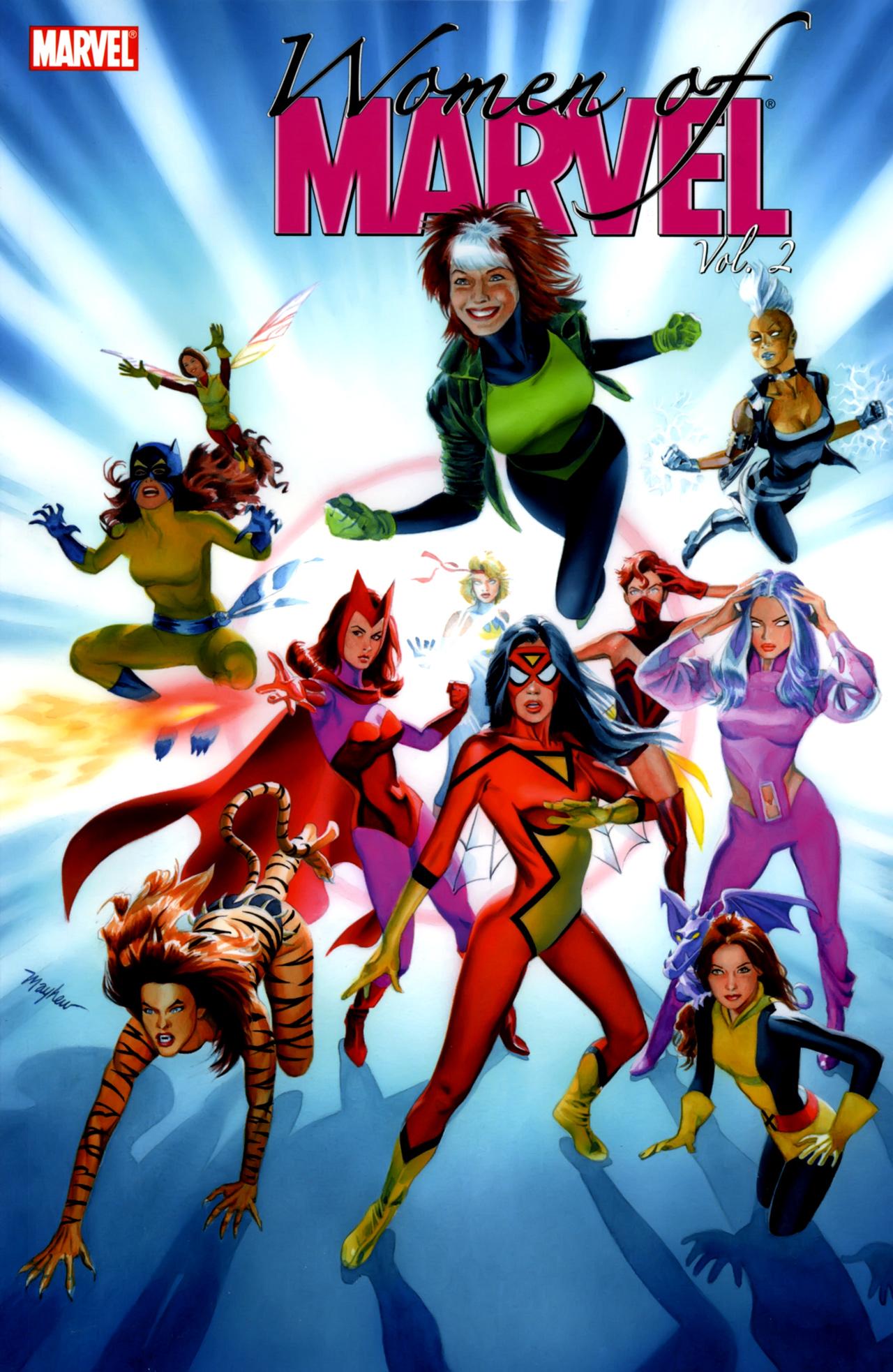 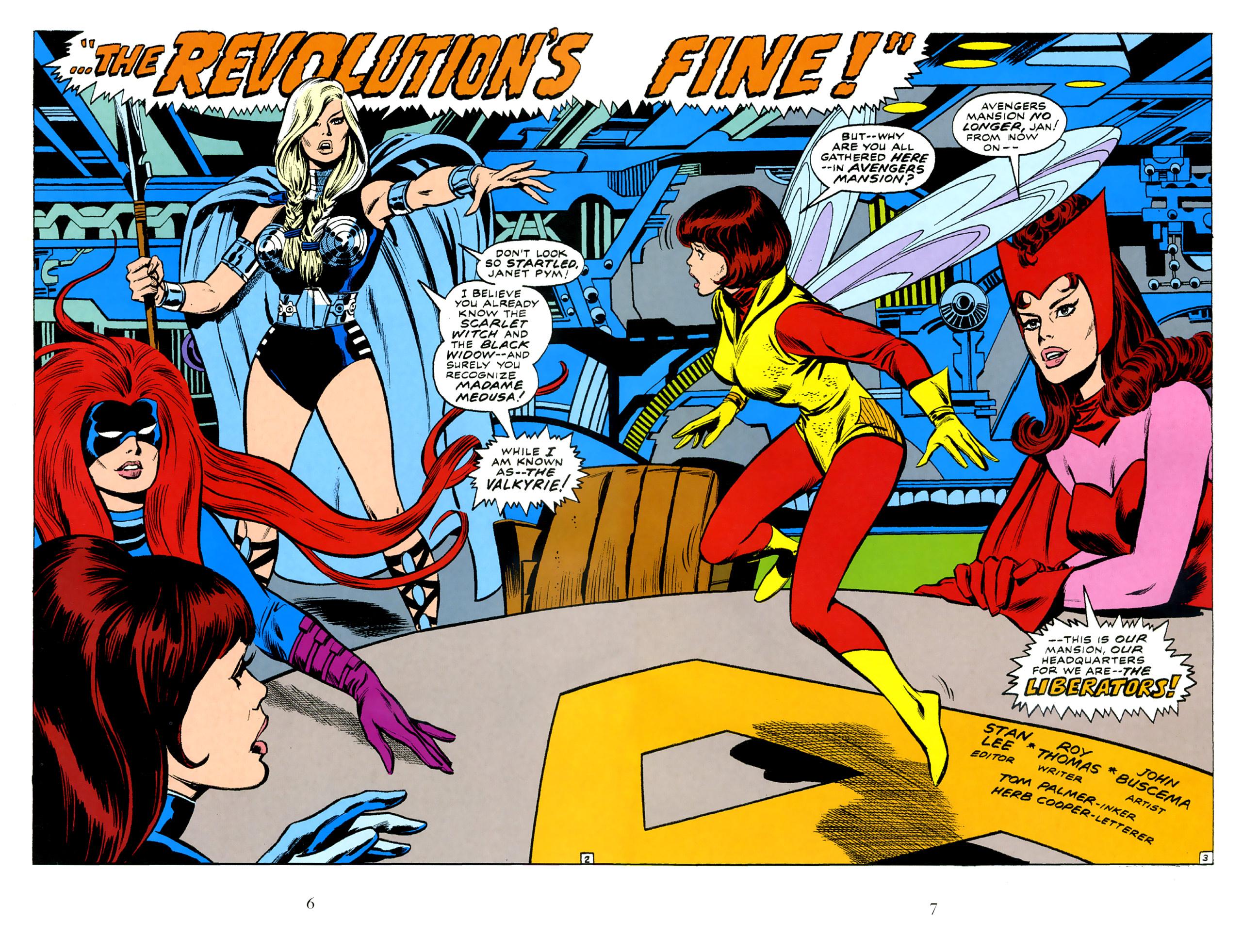 This is a better collection than the previous volume by virtue of presenting far more readable material, although possibly not always for the reasons intended, and some very good art.

It’s John Buscema who leads the way, both literally and by example as he draws the first of two contrasting opening tales. Roy Thomas’ 1970 take on feminism amounts to gathering a bunch of female heroes in one room and having them convinced in two pages that they’ve been suppressed throughout their careers, so they should beat up the Avengers. There’s zero logic, but it’s fun and some gorgeous Buscema art (sample page) goes a long way to rectifying a silly story. The following Spider-Woman tale by Mark Gruenwald and Carmine Infantino is also nonsense, but sustains a strange tension as Jessica Drew slips through a sequence of emotional dramas. Infantino’s far more stylised by the late 1970s, yet he knows what he’s doing.

As Chris Claremont was seemingly the only creator at Marvel in the 1980s concerned about the positive presentation of women, he’s again well represented, at just under half the book with four X-Men stories. Paul Smith, John Romita Jr, Rick Leonardi and Marc Silvestri illustrate, and as it’s before Silvestri began stretching all his figures and adding dozens of lines to every panel they’re all well drawn, and although not all near Claremont at his best, they all entertain if you can get past the sheer amount of unnecessary words. The other problem is that Claremont’s work is very dependent on complex continuity. Many pages of these stories lack relevance in isolation as their purpose is to set up the events of future episodes, and there are constant questions as to who people are. The best is the first as Kitty Pryde comes through a crisis and is reunited with a friend, while Smith’s pages have a gloss and an emotional sensitivity.

Richard Howell’s art on a Vision and Scarlet Witch story is altogether more basic, although he illustrates a nice Doctor Strange sequence, and Steve Englehart’s plot is a real timepiece considering how both characters have changed over the years. Here they’re joyously expecting the birth of their son, but the more interesting aspect is the sheer perversity of voodoo priestess Nekra prancing about raising the dead. Better art might have sold the emotional moments, and that applies to Al Milgrom’s work on a West Coast Avengers tale, also written by Englehart. The purpose is to reveal what Tigra’s done to sustain her powers, and provide her with a more logical origin. She’s Greer Nelson, introduced as the Cat in volume one, and what Englehart provides is logical and interesting, but Milgrom over-exaggerates everything when subtlety’s needed.

Bret Blevins makes Black Cat and Dagger resemble toy dolls, so not good, but he creates a nice monster at the end, taken on by the far better Dan Lawlis for the second chapter. Terry Austin’s story has the germ of a good idea, but to get to it requires reading page after tedious page of monologuing by the villain.

Are these stories positive and empowering when it comes to female superheroes? Most of Claremont’s work is, although it’s a shame Kitty needs rescued by Colossus in his first story, but all too much of the remainder is standard objectification. Does Tigra being half-cat genuinely justify her bikini costume? Is Valkyrie’s the most ridiculously impractical costume ever conceived? They have done since, but were Marvel really doing a whole lot better with their female characters when this was issued in 2007?