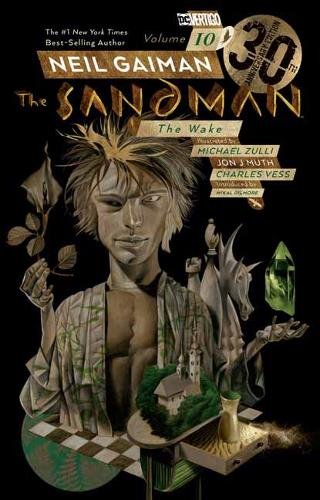 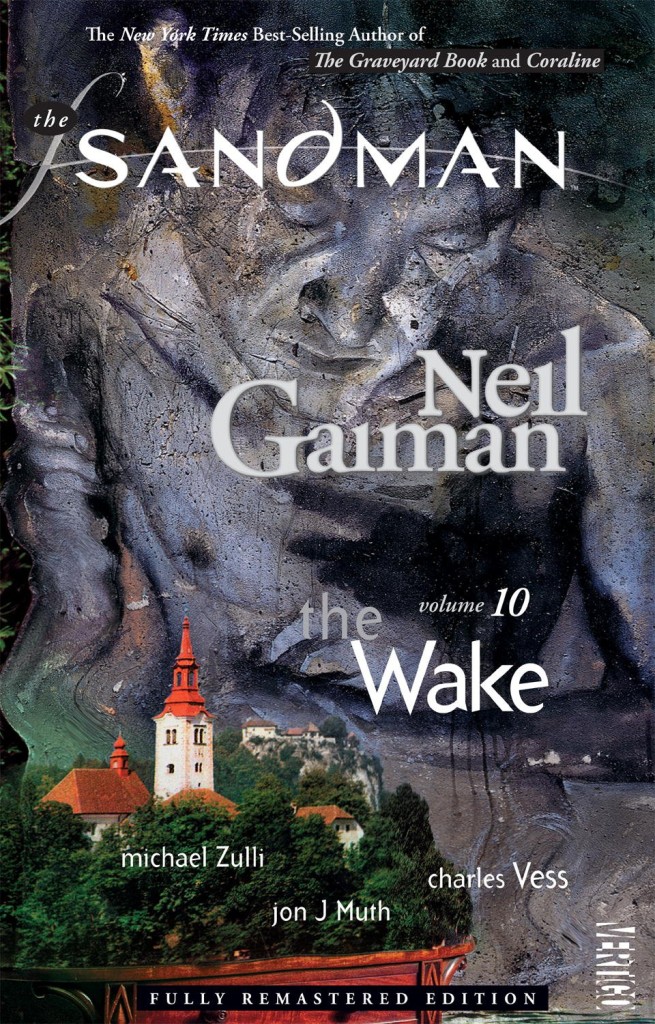 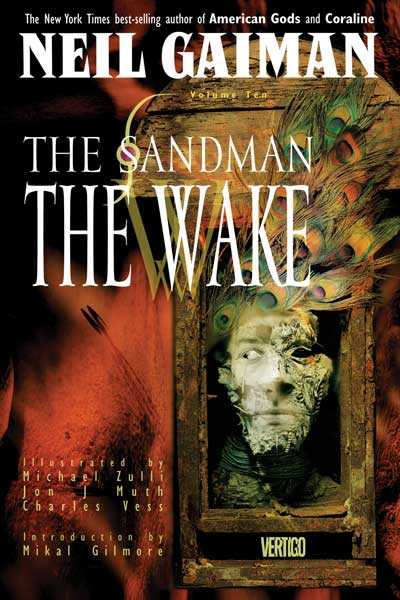 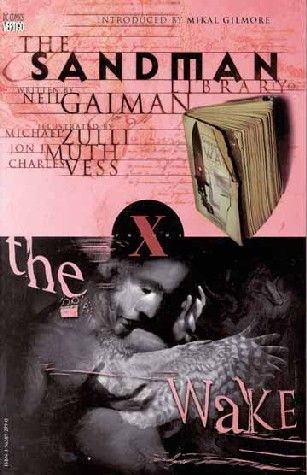 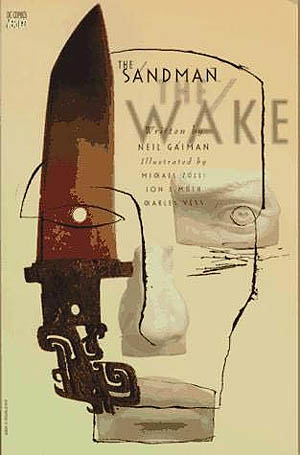 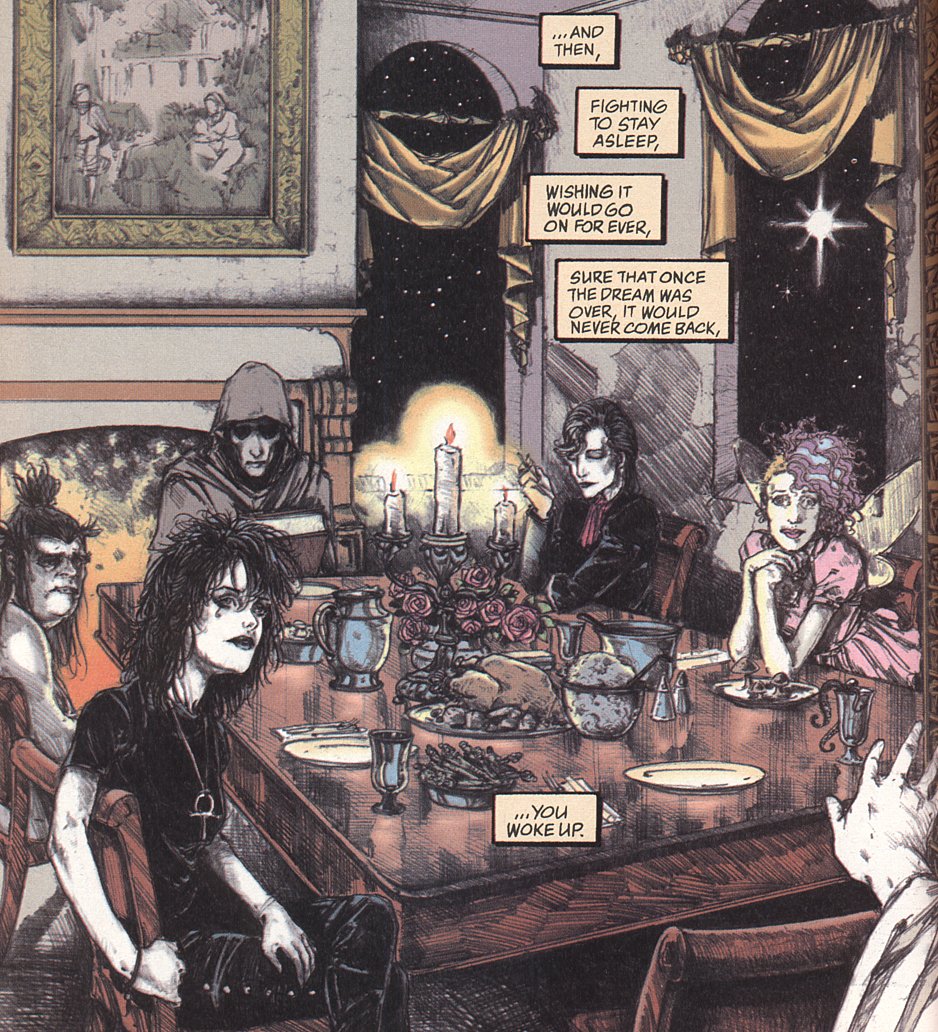 The Wake rounds off the collections of Neil Gaiman’s original Sandman series, and enjoyment will very much depend on how deeply you immerse yourself in his world. It’s not as ponderous as The Kindly Ones, but the title story still takes a fair amount of pages to dispense very little wisdom or plot. Those invested in the assorted characters, though, will appreciate their farewells.

The title rather concedes the circumstances, and while pretty well any other Sandman book can be read in isolation, this would be the exception. Much of it will have little resonance for those who’ve not read several of the previous volumes. Many drop by to deliver their eulogies, some more verbose than others, and there’s a pleasure in the interaction of folk previously unknown to each other. The key character in this sequence, and the one whose comments carry the greatest emotional weight, is Matthew the raven. His emotional progression mirrors that which we often endure in coping with the death of a loved one, and although among the simplest of the speeches, it’s also the most powerful: “What’s in my heart? A lot of sorrow, a little regret, and the memory of the coolest, strangest, most infuriating boss… friend… boss… I ever had”.

It’s not the way everyone sees Morpheus, and secrets are revealed along the way. There’s also a necessary conversation between Dream and Lyta Hall. It’s all drawn by Michael Zulli, who’s good on decorative flourish and layouts, but his figures are sometimes odd. Zulli also illustrates the following tale, which reminds you how good Gaiman can be, even if he’s certainly earned the previous self-indulgence. Hob Gadling was rendered immortal in The Doll’s House, and is given a choice of whether or not he wishes to alter that situation. There’s a witty pastiche of the renaissance fair as seen through the eyes of a man who lived through the period, we learn Gadling’s regrets, and there’s a coda that would have made a fine ending to the series.

Instead we have two further chapters. Jon J. Muth’s fine art stylings on ‘Exiles’ completely contrasts the remainder of the art, and it’s a vague and wispy tale of an offer made and rejected, although containing a line that could encapsulate the previous few books. “Sometimes I suspect that we build our traps ourselves, then we back into them, pretending amazement all the while.” It’s a superfluous underlining, but nicely phrased.

In Fables and Reflections we witnessed Morpheus commissioning two plays from Shakespeare, and the story of the second closes the book, delicately illustrated by Charles Vess. It’s Gaiman pontificating about writing again, taking a few jibes at critics, and it cleverly adapts elements of The Tempest to comment on Shakespeare’s life in a sort of role reversal. Are we to take it as Gaiman voicing himself through Shakespeare, commenting on writing his series, and tiring of it? There’s no definitive answer here, but it entertains, which is the purpose of both Gaiman and Shakespeare’s writing.

This tale is ill-served by the re-mastering process it underwent for inclusion in the fourth Absolute Sandman book. In some places this created dusk where previously there was clarity, and detail has dropped out. In others it’s almost over-exposed it’s so bright. Overall, the pages from the original comic look better. These re-mastered pages are used in post 2010 printings of this paperback, and also found in the second oversize hardcover Sandman Omnibus.

Gaiman would return to Dream and his world seven years later with Endless Nights.