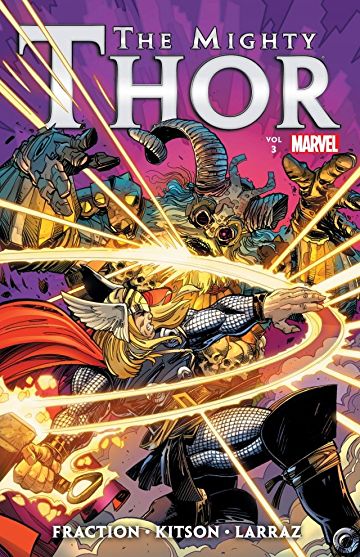 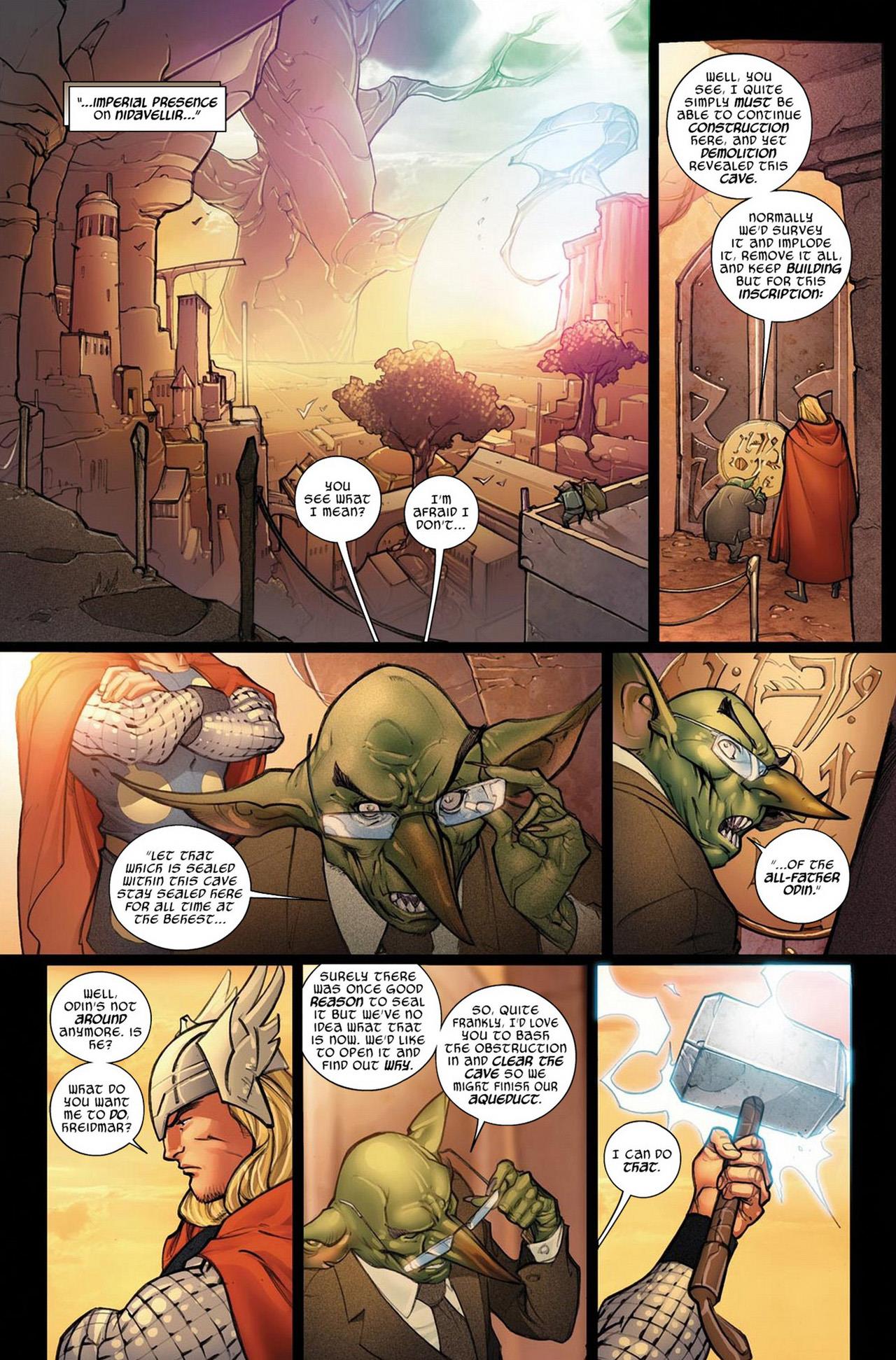 Matt Fraction’s run on The Mighty Thor is not his best work, but it isn’t without imagination. Each volume has a kernel of a good story sadly spoilt by the Marvel marketing machine. The need to tie in to continuity and sell titles far outweighs any interest in telling that good story. A pity, since you get the sense that’s exactly what Fraction really wants to do right from Vol. 1 through to Vol. 3.

Thor has returned, alive and well after his apparent demise with the events of Fear Itself behind him, and gets on with the business of being guardian of Asgard, now the capital of the new republic of Asgardia. Under the leadership of the All-Mother, Asgardia is flourishing, but not without threats. At the behest of the All-Mother, Thor assists Hreidmar, a Nidavellir Dwarf, with a task. Unfortunately it releases the Mares, a race that feeds on consciousness and dreamscapes, putting Asgardia and the town of Broxton, Oklahoma at risk. Down in Broxton itself Dr Don Blake, Thor’s former host, strikes a deal with Amora the Enchantress: his soul for a chance at a Divine life again. Meanwhile, troubled teen Jeff Fischer runs away from home rather than suffer continual unhappiness and abuse. Wildly imaginative, he might be the key to defeating the Mares but his pent-up anger might undo all hope.

Fraction is a philosophical soul, his stories reflecting ideas on the power of dreams, the idea that all can move beyond the designations of fate. There are nods to previous Thor contributors throughout, particularly those of Walt Simonson, Stan Lee and Jack Kirby. Barry Kitson’s opening art reflects this too, reminiscent of John Buscema’s work on Thor. Kitson’s colossi and giant eagles are similar to Big John’s work, the eyes of a character holding deep emotion. In a bold, busy story, it looks out of place, although works in its intended context as a flashback. Fraction’s narrative has much the same whimsy as the early Thor tales, mythical and grand, though rather incoherent. His run feels very personal however, the feelings and frustrations of Blake, Thor and teenager Jeff perhaps mirroring Fraction’s own? Pepe Larraz illustrates most of Vol. 3 with his own share of tributes, notably to the amalgam characters of 1990s Marvel versus DC. Incorporating manga sensibilities, Larraz ends better than he starts, initially focussing on characters over landscapes, the latter suffering as a result. It improves by the end but his focus on characters, of all shapes and sizes, remains foremost with more added to the page.

Despite feeling the most personal, Vol. 3 is the weakest of Fraction’s Thor offerings. The plot is puzzling and disjointed. While it’s obvious he has something to say, it’s never entirely clear what it is, his train of thought muddied. The series holds promise that is never quite realised, tying into major events while attempting to distance itself from its associated series Journey into Mystery running alongside. Looking at Fraction’s fantastic Hawkeye run following this makes you consider what he could do with Thor given a clean slate and permission to run with it. Fraction’s run concludes in The Mighty Thor/ Journey into Mystery crossover Everything Burns co-written with Kieron Gillen.