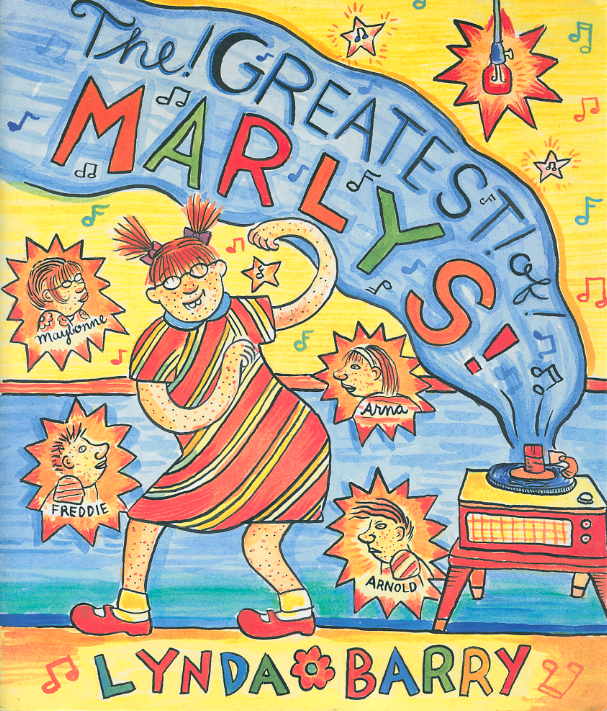 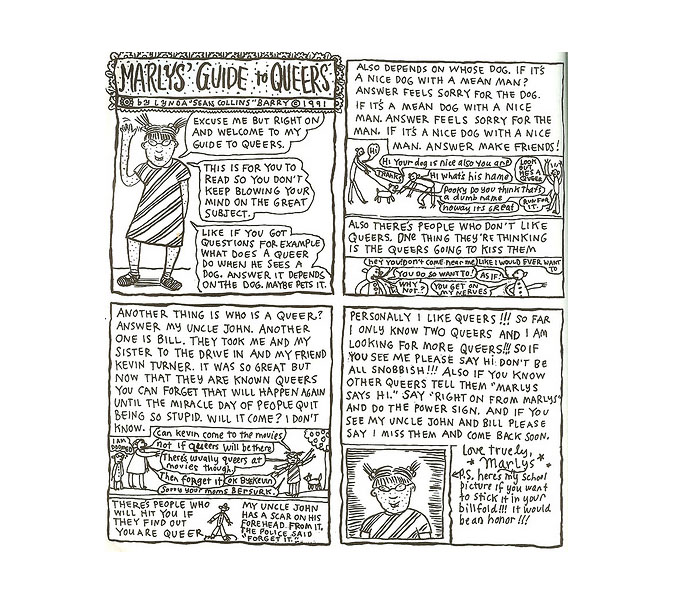 The! Greatest! of! Marlys! is a collection of over 200 strips taken from Ernie Pook’s Comeek. Lynda Barry’s weekly syndicated four-panel strip explored the lives of an extended family group of children: Marlys Mullen, a thoughtful but gawky, awkward eight-year-old girl, her brother Freddie, her teenage sister, Maybonne and her cousins Arna and Arnold. The strip is all first-person stories, but it switches narrators frequently so that stories are told from the perspectives of all of these protagonists. This has the effect of constantly redefining your understanding of who these children are and how they relate to each other, dealing with complicated emotional ‘firsts’ at home and at school, in a world where unreliable or absent adults have all the power and they have none.

Lynda Barry’s drawing appears simple and artless at first, but the rarry line disguises tremendous discipline. She chooses what to draw and what to leave out very carefully to pull you into the internal workings of a child’s mind. Her lettering is equally cleverly styled to vary in tone. The resulting mix of information feels utterly convincing. Notebook scribbles, essays, quizzes, diary entries, pretend newspapers or made-up games seem channeled directly from the characters’ own psyches, with Barry merely reporting what she finds.

There is a wonderful and scary perfection to the levels of meta-commentary in these stories. You initially experience Marlys’ world from her sister Maybonne’s first-person narration, then from her cousin Arna’s perspective. When the stories switch to Marlys’ point of view everything changes as you begin to piece together the missing parts of the narrative, and understand what motivates her. Then you read Marlys’ own drawings and writings, and you get to see the world as she wishes it could be. Eventually you know and understand who this child is, because through Lynda Barry’s enormously intelligent, compassionate and subtle storytelling skill you are inside her, looking out. As the viewpoints continue to switch from one narrator to the next, your empathy grows for all of them. The! Greatest! of! Marlys! is one of the best books ever written from a child’s perspective; laugh-out-loud funny, wise, silly, touching, awful, tragic yet ultimately so celebratory of how children survive, even in the worst possible circumstances, that Marlys Mullen is a hero as great as any to be found in fiction.

When you close the book and look at the back cover, it’s no longer just a funny drawing. You realise that there would be nothing more absolutely fulfilling and wonderful for Marlys than to know that you had read her comics and understood her, and the heart-wrenching emotion you feel is overwhelming. Lynda Barry is a sorceress and this book is an absolute masterpiece.

The! Greatest! of! Marlys! includes strips also reprinted in earlier collections The Fun House and It’s So Magic, both currently out of print. There is a smaller collection that reprints stories narrated by and focused on Marlys’ brother Freddie, The Freddie Stories.