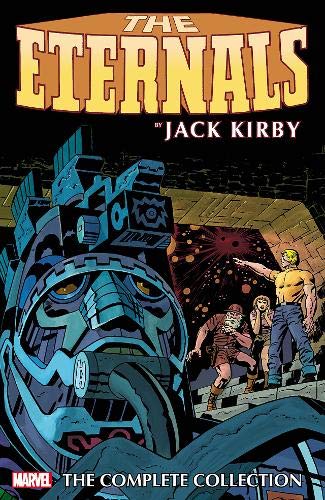 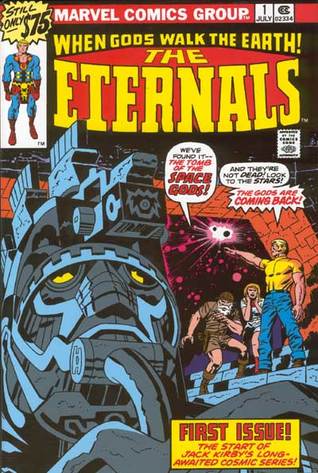 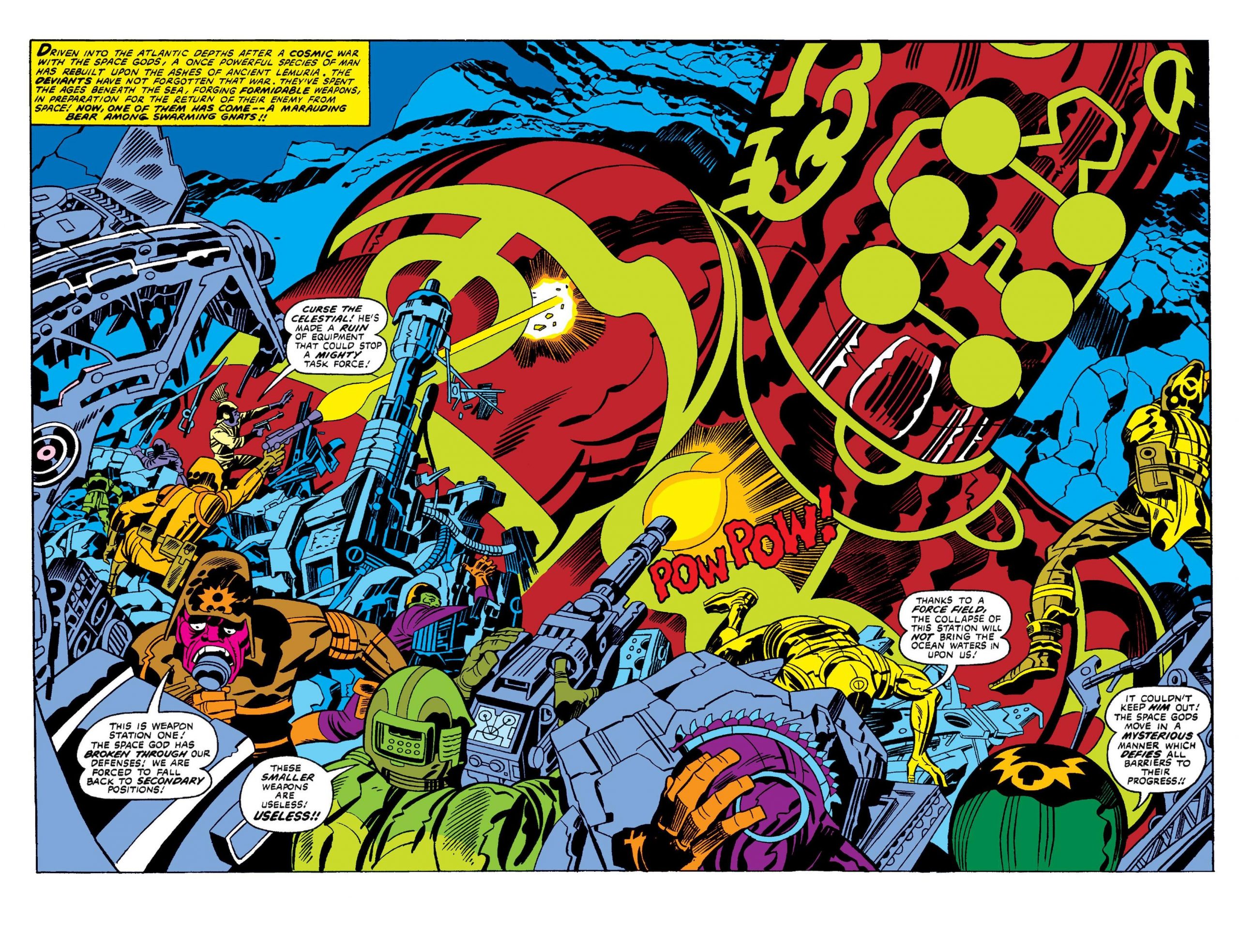 When Jack Kirby returned to Marvel in 1976 The Eternals was to be his widescreen project, packed with big concepts. Kirby continually tapped into the cultural zeitgeist to serve a conceptual soup of current ideas given his individual creative twist, here starting from the mid-1970s theories of Erich Von Däniken. He posited that early humanity was jump-started by alien interference, and signs of this were visible in South American artefacts and landscapes. It’s been thoroughly discredited, but the ideas fired Kirby’s imagination, prompting races hidden on Earth for centuries and the Gods due to return to pass judgement on humanity. Just how enthused he was is seen on every page of the opening chapter. He relishes the depiction of ancient astronauts, the subterranean Deviant civilisation, each of them looking different, and the progression of humanity alongside other races.

Kirby had been this way before. Remove the aliens, and the tone isn’t far removed from his 1960s Tales of Asgard series, myth clashing with reality, science fiction here the additional component. His world building over the opening two chapters is phenomenal, yet during them barely any of the Eternals themselves are seen. That’s partly because the initial chapters, when Kirby’s vision was the strongest, were just the prelude to his wondering if mankind could survive the final judgement. This isn’t instant. The Celestial who arrives on Earth will observe for fifty years, leaving plenty of scope for other ideas. One concerns whether or not someone cast in the role of villain is destined to follow a predetermined path of playing the devil. The Deviant Kro looks malign, but there’s a nobility to his devotion to a cause. The duality of outer appearance and inner personality is used several times, most interestingly with two Deviants, while the core Eternals, when eventually fully introduced, conform to an idea of Godhood.

However, having established his premise, Kirby’s ever-fertile mind frequently strays, building a frustrating series. The conceptual unification and explanation of multiple myths over a wide spread of cultures is fascinating and wonderfully logical, the art stuns, and his better stories have an emotional resonance often lost in Kirby’s work. Humanity is key to exploring the final judgement, and the inclusion of 1970s Cold War politics is integral and interesting. Too many 1970s readers, though, couldn’t see past the often forced, bombastic dialogue, and editorial interference results in compromises that sapped Kirby’s energy. Urged to integrate with Marvel’s mainstream universe he compromised by introducing a cosmic-powered Hulk robot for his most uninspired episodes.

While noting Kirby’s dialogue is often just functional, he’s also capable of the intriguingly poetic as per his description of the fantastic Uni-Mind: “The Uni-Mind lives in the climate of catastrophe. It defines the nature of cataclysms and seeks the path to survival”. Whew! Take that Grant Morrison!

This Complete Collection was first issued as a hardcover Omnibus in 2006, where not all the art is presented as well as the sample, taken from Marvel’s digital reproduction. All too often dialogue and art slips into the binding, representing poor value from an expensive book. Two subsequent paperbacks of The Eternals by Jack Kirby supply the same content. Hardcore fans with money, though, might prefer to wait for 2021’s Monster Size edition, presenting all Kirby’s Eternals at the size he drew the original art. Alternatively, all Kirby’s Eternals is combined with subsequent work by others in Eternals: The Complete Saga.

Roughly half the content is innovative and inspirational, but much is also wayward and going through the motions, leaving a flawed experiment, and the legacy of more characters to be exploited by others.