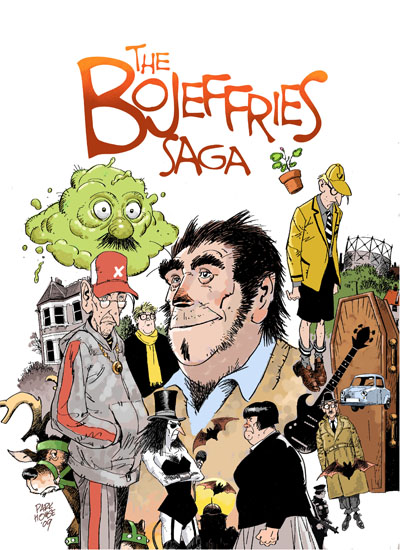 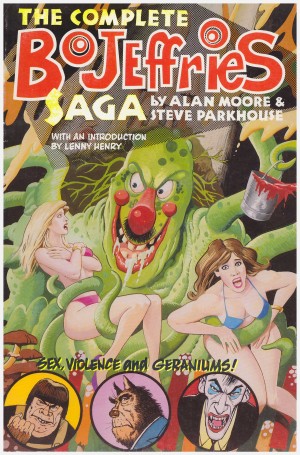 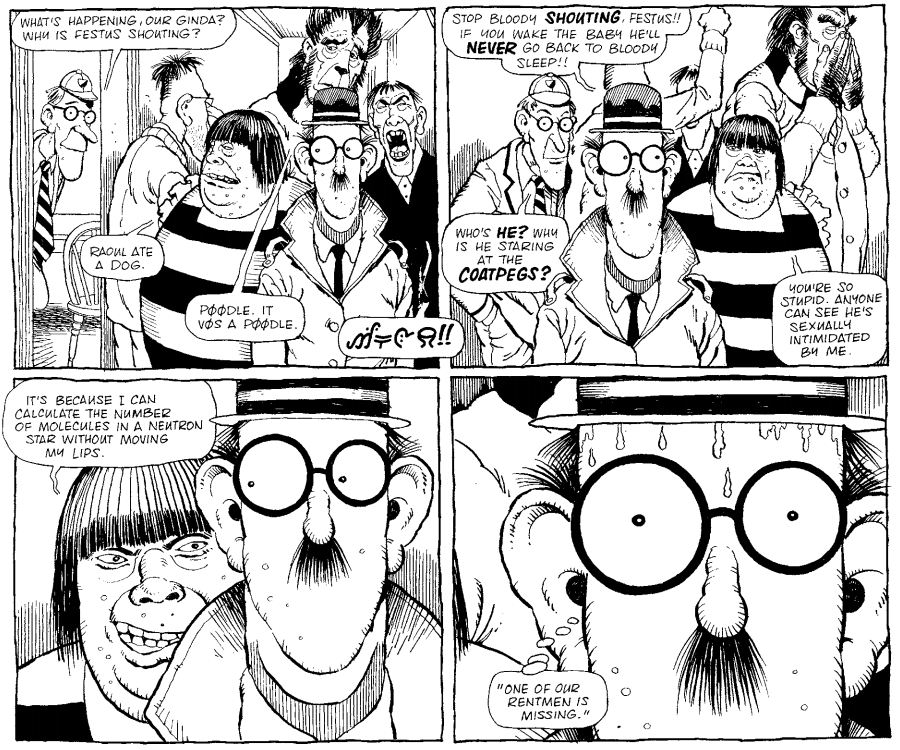 Rare would be the person who describes one of comics’ premier talents as ‘comedy writer, Alan Moore’. He’s a wordsmith whose wide-spanning career has hit just about every tone imaginable, and when he wants to be funny… well, it’s hit and miss. The lighter moments of his more serious or genre stories generally work, but for straight yuks, read through the run of ABC’s anthology series Tomorrow Stories and you’ll find results ranging from clever to strained.

Fortunately, The Bojeffries Saga, Moore’s version of The Addams Family, gathering a variety of supernatural entities under one roof, is set in the “merrie olde” where he’s more culturally adept than, say, the farm lands of middle America in Jack B. Quick. It’s an older and minor work from Moore, collected from the long-defunct Warrior magazine, but most with a taste for dry wit mixed with slapstick will enjoy this short stack of loopy strips drawn by Steve Parkhouse. Best known for drawing Doctor Who, stories in 2000 AD and a recent graphic novel on the Sex Pistols, Parkhouse is an ideal match, grabbing hold of the lumpy, oozing insanity of these caricatures.

As with America’s pair of monster sit-coms, most of the humor comes from the Bojeffries trying to fit in with “normal” society who never seem to glean that this is a collection of old horror types. We’re introduced to the lot of them in ‘The Rentman Cometh’ featuring “Inchmale of the Council”, a self-narrating milquetoast who tries to extract rent from them in arrears since Queen Victoria. Each step the man takes into this world brings another mad creature into the room until he’s in front of the grandfather, “In the last stages of organic matter.” (“Provale me not, sir, or tis with the night’s plutonium shorts that you are laundered!”)

Of the cast, Ginda BoJeffries is the comic standout, a stocky, pimpled bulldog of a woman who is all-powerful and never tires of explaining that to people she assumes will be intimidated by her omnipresence. Her solo strip has her venture out on a date night, kidnapping and abusing a “wing woman” and literally carrying a man in a leg cast home with her for sex: “During climax, I may release millions of eggs.” It’s hilarious stuff until, in just a half page, it reaches a kind of odd poignancy, demonstrating the sad loneliness of monsterhood and willful social incompetence. ‘Raoul’s Night Out’ is another highlight, starring the shape-shifting foreigner/werewolf who joins his factory workmates for a party that descends into a racial rant and a cheap shot at the police. Other pieces involve a Romanian vampire who dies repeatedly, a beach day told in narration, and a very odd group singalong.

The first collection of these stories by Tundra (which added colour) included a final strip, covering wacky Christmas with the Bojeffries. This new printing by Top Shelf adds yet another final piece – a 24-page update of the family two decades later after the son Reth has published a tell-all book making them public figures. The new comic pours on the British with some hard-to-interpret dialects and spoofs of the goth/punk scene, Parliament and BBC reality television. It more or less holds up to the rest of the book. Returning to black and white is effective in showing off Parkhouse’s detailed work.

The whole thing is great, childish fun. The BoJeffries Saga is weird, singular and rude in a way that can only come from an Englishman.