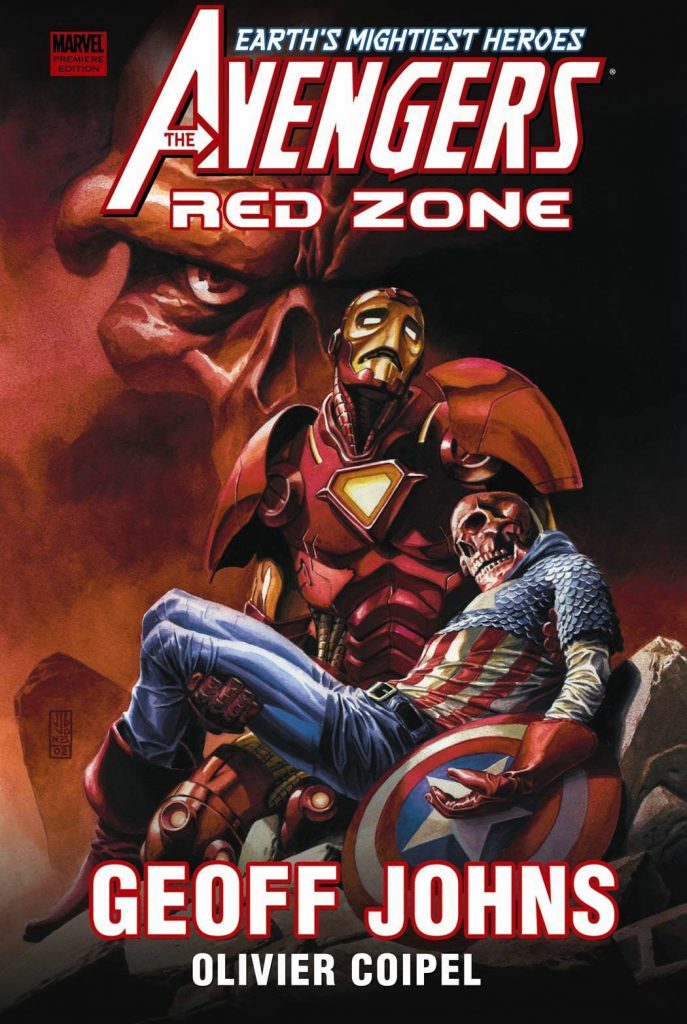 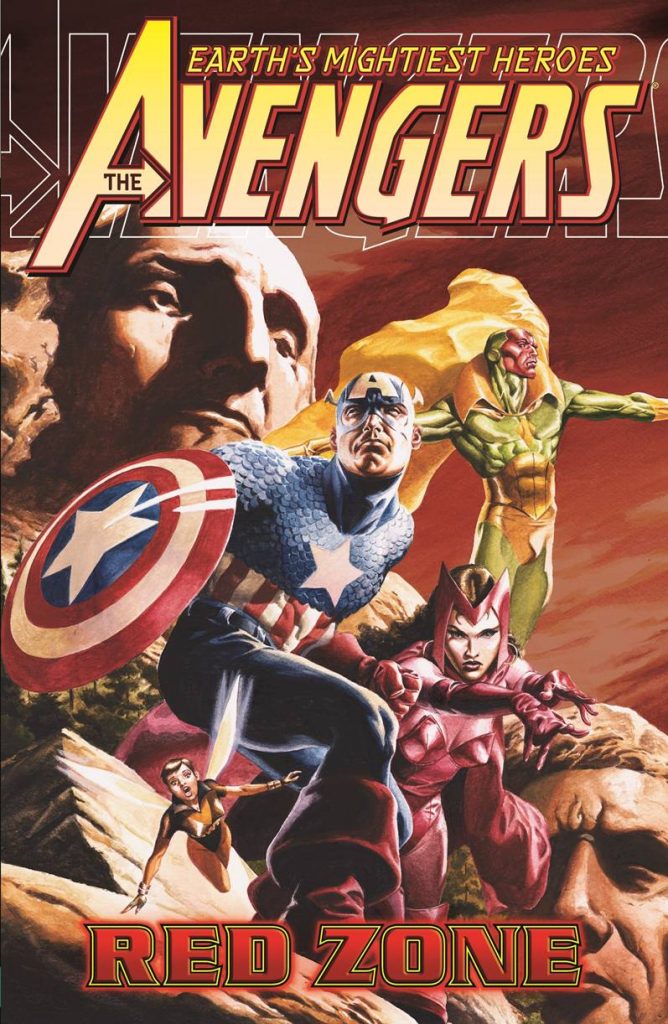 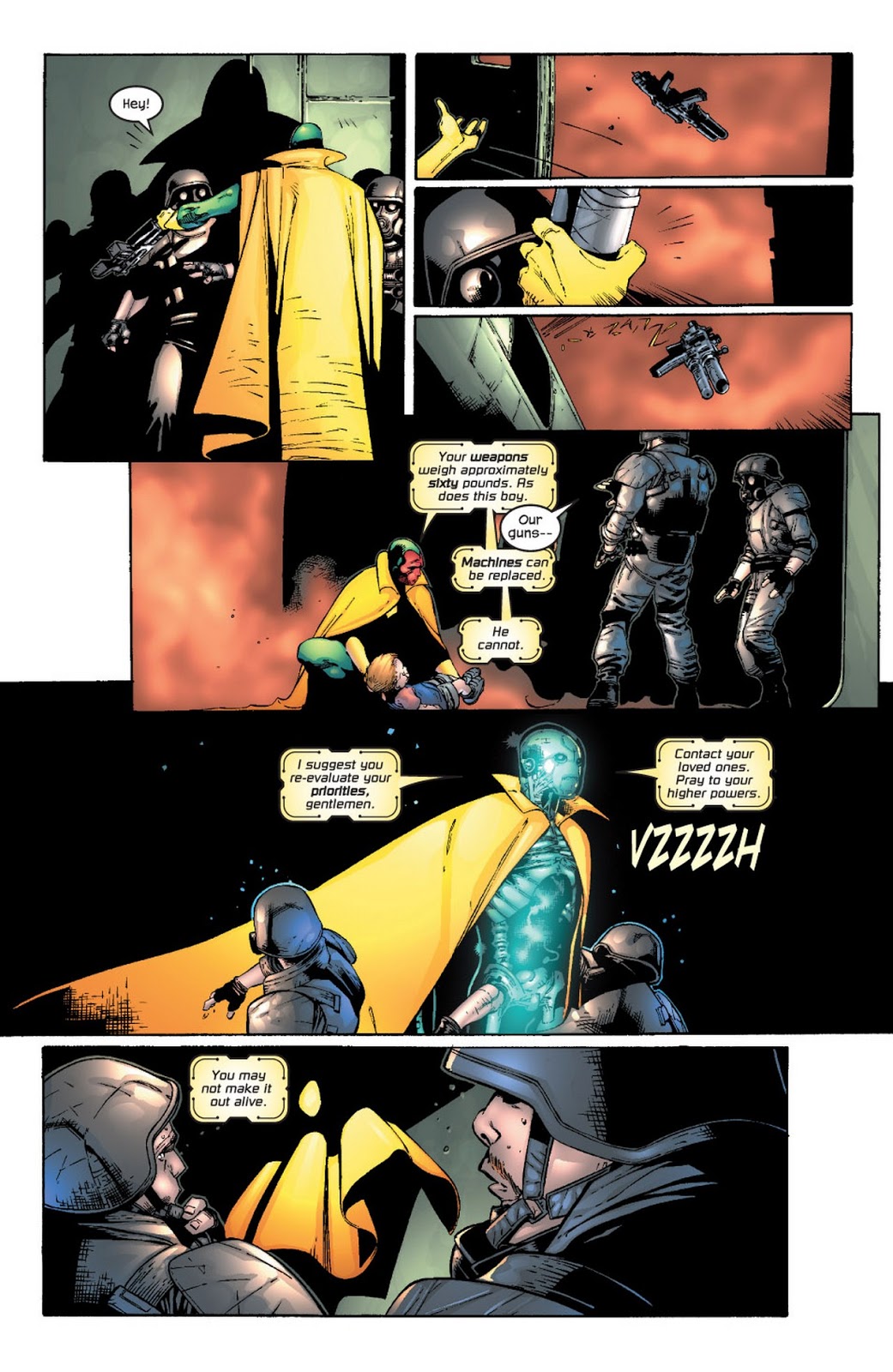 Red Zone is the signature piece of Geoff Johns’ Avengers run, a sinister intrusion of real world politics into superhero activities, beginning with Mount Rushmore and the surrounding area being enveloped by a red cloud that transmits a form of flesh eating virus. The stage was set with a corrupt Senator in Standoff, and to all intents it’s a terrorist attack on American soil, the story originally serialised in 2003, so Johns well aware of the parallels he was drawing. It’s an interesting problem as the Avengers can’t punch away a cloud, and Johns further pits them against the authorities, thrashing around in their ignorance, their only power lying in clinging to power and protecting secrets.

The needs of the story require an artistic approach differing from the usual Avengers technique of flying in and punching out, and Olivier Coipel supplies that, presenting lovingly detailed military hardware, people in panic and the hovering threat of the cloud. For much of the story the Avengers wear protective suits, so Coipel’s artistic statement is a spooky looking metallic skeleton effect when the Vision phases through solid matter. Colourist Chris Sotomayor has a larger role than usual on a superhero title, ensuring that red shadows spread over large sections of the pages. Deadlines appear to take their toll, and Coipel’s work on the final chapter has a rushed quality evident in the basic layouts, some strange Scarlet Witch drawings and lack of detail. His is art is otherwise phenomenal.

For four chapters Red Zone is a taut story with a problem that appears beyond the abilities of the Avengers to solve. There are well considered character moments, as Johns treats the Vision’s humanity with some grace, the Falcon and Black Panther have pleasing roles, and the human cost is never forgotten. However, because this is an Avengers story there has to be a super villain, and while it’s a compelling choice, the appearance of a super villain instantly eradicates the heart of the matter, which is that the US government has been developing an appalling weapon. The implications of that would have made for a far more interesting conclusion than the one on offer, which descends into standard fare. With hindsight, it might be felt that a President Bush cameo was also uncalled for.

Still, the tension of powerless Avengers over the first four chapters is excellent, and despite its failings, at the time Red Zone was a better long Avengers story than any for about a year either side of its publication. It’s available as a 2003 paperback and a 2010 hardcover, and now found in both The Avengers: The Complete Collection by Geoff Johns 2, and in the massive oversized (and expensive) Avengers: The Vibranium Collection. Johns’ Avengers continuity continues with Search for She-Hulk.