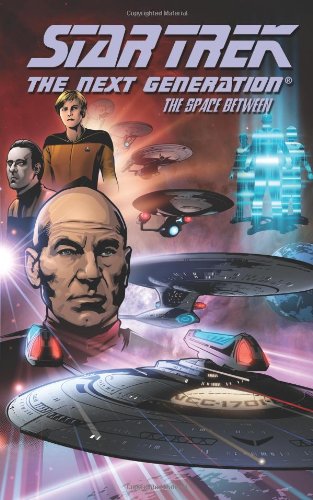 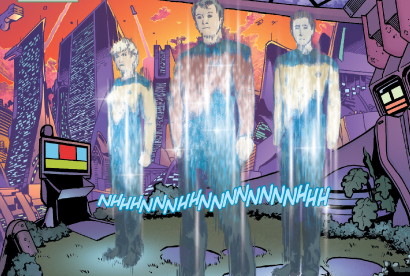 The purpose of this collection was to celebrate The Next Generation‘s 20th anniversary, so writer David Tischman sets his stories throughout the seven seasons of the TV show. He supplies inventive material that most fans of the series should enjoy, unless they’re particularly keen on the cast’s female members, who are given short shrift. There are three pages of Beverley Crusher in the holodeck, Deanna Troi is incapacitated, Guinan is absent, Tasha Yar is minimised and it’s Ensign Ro, hardly a long-term primary character, who’s allocated the most prominent role.

We’re presented with a society that constantly updates and modifies their digital records, Picard and an archaeological crew pondering the mystery of a shuttlecraft on a deserted planet unexplored for centuries, and an encounter with a hybrid ship featuring Romulan, Borg and Klingon technology leaves the Enterprise a sitting duck. Geordi, Ro and Worf crash on an icy planet to meet zombie monks while the Enterprise is transporting a despot for trial, and another plot focuses on Wesley Crusher on a planet where there’s conflict between agricultural tradition and independence.

Tischman’s characterisation is spot on, and includes some nice touches. Data stops mid-sentence, then explains “I am accustomed to being cut off when I give what others perceive as non-essential information”. His final chapter ties the remainder together with the revelation that someone in Starfleet is creating weapons from the technology accessed during the Enterprise’s exploratory mission. It’s a discovery that endangers the Enterprise and all on it, but the conclusion is a complete head-scratcher. The space between indeed.

Artist Casey Maloney, inked by Stacie Pander for half the book, produces variable cast likenesses. He’s good with Data, Picard and Worf, but has trouble capturing other crew members. Coupled with his static poses and occasionally odd figurework, he’s functional rather than impressive. He’s at his best with scenery, particularly the Mayan designs and lush flora for the Picard tale, which makes him an odd choice for a series about a starship.

The entire book is also available in IDW’s Star Trek: The Next Generation Omnibus.