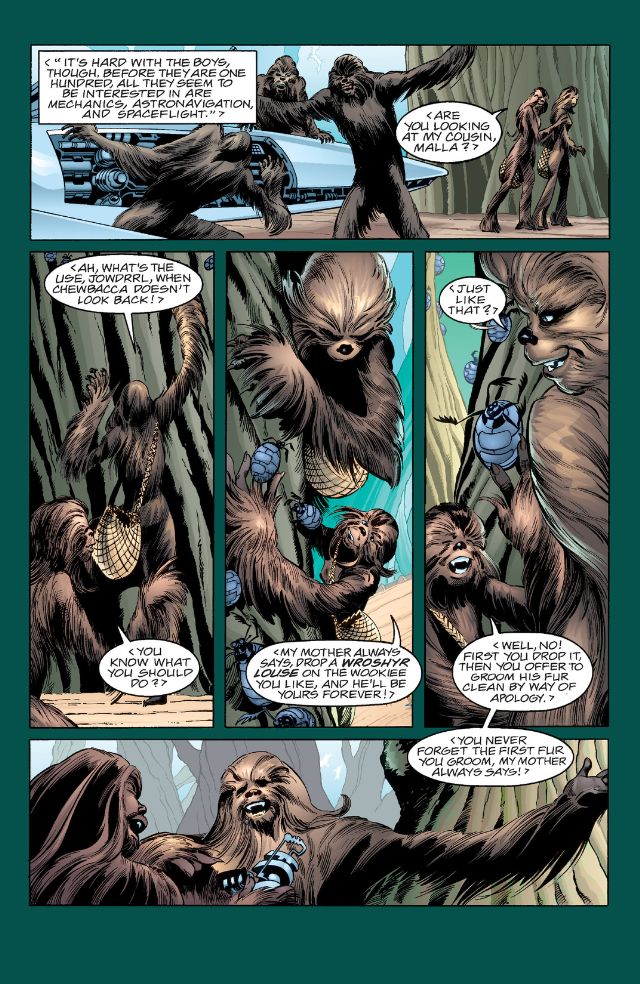 Star Wars: Chewbacca commemorates the events of the novel New Jedi Order: Vector Prime where the mighty Chewbacca, in an act of love and self-sacrifice,  gives his life. There’s always the risk any Star Wars book might only appeal to die-hard fans, but this has a tender and often moving tone. Darko Macan steers this tribute to Star Wars favourite side-kick with some very insightful scripting. An anthology that did nothing but deify Chewbacca would be the easy option, but instead Macan chooses to explore the complex emotions that people (in this case humanoids) have to deal with in the wake of a loved one’s death.

With the help of a huge artistic team including Dave Gibbons, Brent Anderson, Jan Duursema, Rafael Kayanan and Igor Kordey, Macan puts the microscope on Chewbacca’s life and death, encompassing the viewpoints of family, and each of an enemy, an acquaintance, a colleague and a friend. They start with the more obscure Mallotobuck and work their way to a touching ending involving Han Solo.

The art varies in style from story to story, complimenting the tone of the memories supplied by each narrator, succeeding in drawing the reader in. Some tales are slightly awkward, with the artistic styles clashing a little, but not enough to detract from the overall tone. Death is awkward and painful, leaving gaping wounds that are hard to heal. The feelings that bereavement brings bubbling to the surface can be hard to admit. That these aspects of humanity are so skilfully expressed is a real credit to Macan and the artistic team, and the stories add depth to Chewbacca’s character with interesting flashbacks bulking his backstory.

The book is slightly let down by its sources (a 1978 Star Wars Christmas Special and various novels) being familiar to more serious Star Wars fans, and they may distance this material for the casual fan. That would be unfortunate as it packs a hefty emotional punch. There is a foreword penned by Peter Mayhew who played the Wookie himself in the films.

Where other Star Wars graphic novels appear bogged down by a need to stick to the source material, Star Wars: Chewbacca uses that material to respect the series and still stand apart. The story may be set “In a Galaxy Far Away…” but the grief, guilt, bitterness, shame, pain, gratitude and love associated with death and bereavement is all very human and grounded in emotional reality.