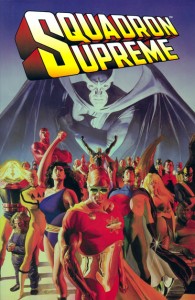 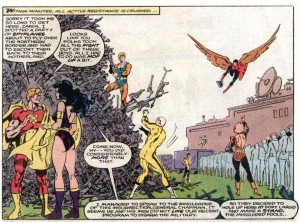 Working at Marvel Comics between 1978 and his premature death in 1996, Mark Gruenwald’s influence was immense. He was apparently universally liked and respected, which is a remarkable testament for an editor, and wrote a considerable number of comics. Squadron Supreme is what he considered his peak.

For the most part Gruenwald’s other material was runs of ongoing series, but Squadron Supreme offered a cast able to change, rather than the resolute stability required by more viable properties. The Squadron Supreme were introduced by Roy Thomas in The Avengers as barely veiled simulacrums of the Justice League of America in the days when inter-company crossovers were unthinkable. Revived irregularly, the joke continued with new members being analogues of characters added to the Justice League. They were, however, pretty much blank slates. They occupied Earth in an alternate universe, acted much in the manner of the Avengers, and had on occasion fallen under the thrall of mind-controlling villains. Gruenwald wanted to tell a story about superheroes using their abilities to improve the lot of humanity rather than just reacting to villainous plots. Beyond that, he wanted to explore the ethical implications of superheroes imposing their idea of what’s right on humanity, no matter how well meaning.

He succeeded in writing a page-turning, thought-provoking, well-considered polemic, simultaneously delivering heart-rending moments for characters he pretty well created from the scraps of previously appearances. Dwarf scientist Tom Thumb and family man Whizzer stand out. Unfortunately, for all that Gruenwald poured his heart into the project to deliver a career peak, the artists who drew the story are resolutely ordinary. Paul Ryan is a slight improvement on Bob Hall, and to be fair to both they deliver clear layouts around an often wordy script, but their styles lack dynamism and a capacity for delivering human emotion in a story that cried out for it. Squadron Supreme needed better than a workhorse able to deliver 20 pages per month on deadline. Ordinary art doesn’t torpedo the material, but renders it far less than the landmark it should be.

In accordance with his wishes, first printings of the book have Gruenwald’s ashes mixed into the printing ink. The second edition contains testaments from assorted creators, and the most recent hardcover omnibus edition couples the story with the inferior Death of a Universe. Altered versions of the characters, and elements of Gruenwald’s story, are seen in Supreme Power, and it’s also available in Squadron Supreme Classic Omnibus. 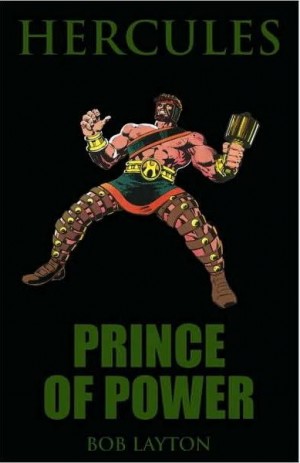 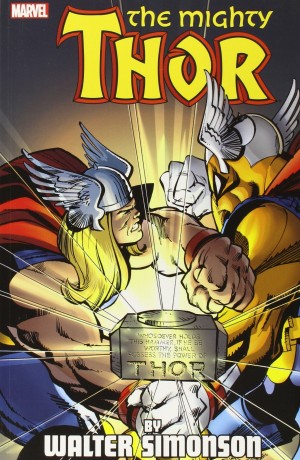