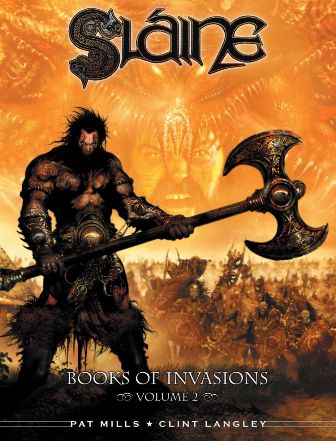 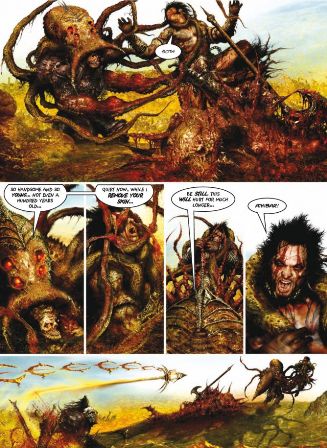 The Books of Invasions Volume 2 continues immediately where Volume 1 left off, at the beginning of a fierce battle between the Fomorian controlled Atlanteans and Sláine’s tribe the Sessair. Sláine tries to convince the princess Scota, wife of the Atlantean leader Gael, that the only common enemy should be the Fomorian Golamhs who control her husband and his honour guard. Meanwhile the Fomorians also target the Irish fortress of Tara, the heart of the Resistance and the most sacred place in Eriu. While convincing one woman to change her mind Sláine must also entreat the Earth Goddess Danu, fickle at best, and beat her in a challenge so that his people might find sanctuary. However, her realm is in the EL Worlds and the Cythron, the destructive gods the Fomorians worship and Sláine’s arch-enemies, are eager to upset his plans and bathe in his blood.

As spectacular as artist Clint Langley’s work was in Volume 1, there were some teething issues. Happily Volume 2 has no such problems and Langley sets about delivering a visual masterpiece, refusing to be limited by boundaries and instead employing them to tell the story his way. Pat Mills is using the Lebor Gabála Érenn (translated as Book of Invasions), an ancient history of the Irish and Scottish peoples, as the basis for his saga. And Saga it is, the depictions of violence at times overwhelming, heightened by Langley’s photorealistic style, yet essential to the story. The ravages of war make for bleak reading so Mills injects humour into some great dialogue. Like all great epics he explores the camaraderie between warriors, male and female, and it isn’t just between Sláine and company, so not only is it often funny. but it enriches the story too. Langley is a wizard at displaying those human moments, whether the touching interactions of joy or moments of great sorrow. Death and funerals feature frequently throughout the saga, events Langley demonstrates incredibly well in Volume 1 but excels at here, the grief rippling through the crowd. It is a stunning fantasy spectacular of dragons, flying ships, descents into other worlds and brilliantly unsettling monsters set against scenery that induces either terror or awe.

Surely this is the vision Mills had all along, free from interference, employing years of experience and working with a phenomenal artist whose vision for the material is as great as his own. Readers who left Sláine after The Horned God may want to rethink their position after reading this work of wonder. Mills and Langley conclude this fantastic epic in The Books of Invasions: Volume 3.