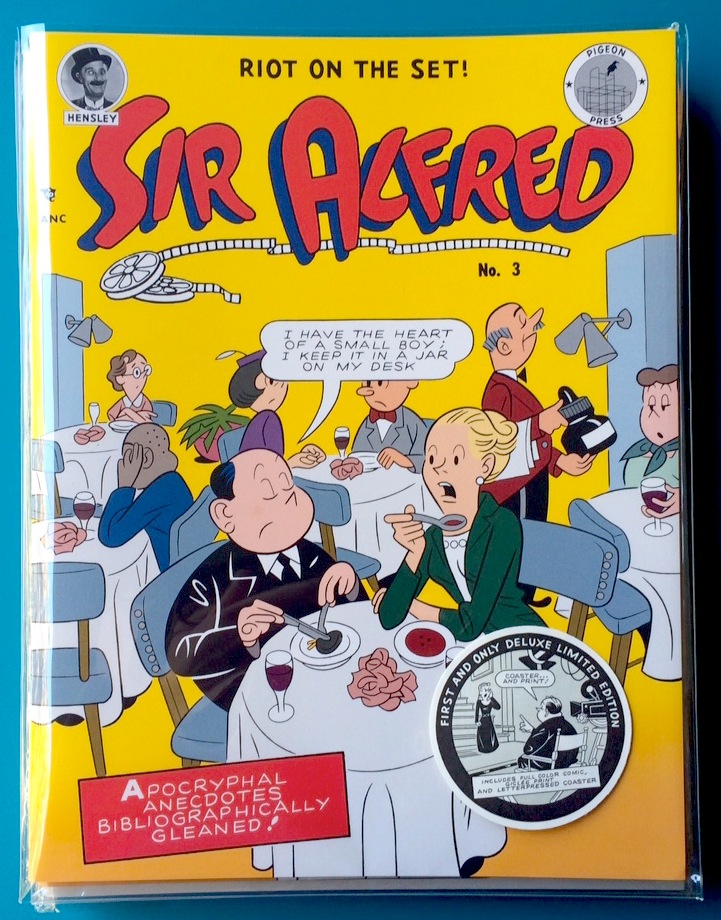 Sir Alfred No. 3 is an oversized and lushly produced, experimental biography of one of Hollywood’s best-known film directors, Alfred Hitchcock. In the 1950s/60s, comics featuring film and television celebrities as cartoon caricatured versions of themselves were a popular sub genre, and Tim Hensley takes this storytelling style as the basis for his book. Yet the cover of Sir Alfred No. 3 will tell you it’s no simple retro entertainment. As with his previous graphic novel Wally Gropius, Hensley delivers a complex assemblage of period references mixing different types of high and low commentaries. The title lettering and cover layout echoes Bob Hope and Sgt. Bilko comics but the drawing blends their ‘official’ cartoon styles with the look of Marge Buell’s Little Lulu: Tubby’s fatness and pointy nose is a perfect fit for depicting Hitchcock’s famous bulk in his customary black suits. And then there are the jokes and meta-jokes themselves; period-appropriate surrealism and slapstick for a 1950’s movie tie-in comic, but also frequently cruel, sadistic, creepy, plumbing the dark sexual depths of Hollywood Babylon rather than the merry boosterism of Variety.

Hitchcock’s life and his well-known obsessions are presented here as a series of gag strips, based on the many famous anecdotes, tall tales and apocrypha about the director that he liked to spread about himself, or that others told about working with him. Accordingly there’s a parade of actors, writers and artists running through these strips as the making of each film from Hitchcock’s vast oeuvre is mined for incident. Hensley translates the likenesses of Cary Grant, Salvador Dali, Greta Garbo, David O. Selznick, Edith Head, Gregory Peck, Bernard Herrmann, and many other cinematic luminaries into his reduced, stylised forms and yet they remain recognisable. Francois Truffaut in particular gets a series of pages to himself, arriving in Hollywood to conduct the famous Hitchcock/Truffaut interview; the portrayal of the French nouvelle vague director and superfan is especially delightful, and filled with references. There are also homages to the styles of cartoonists Milt Gross and Don Martin

From the No. 3 in the title we are meant to infer there have been two issues before this one and possibly more since, but of course the world that Hensley creates here from many types and styles of comic strip and different modes of presentation exists only in this book and there are no others. Just as with Wally Gropius the production of this exquisite object is an end in itself. It is as much a collection of techniques and exegesis on drawing and printing as it is a collection of narratives, on very large 328mm x 250mm pages and thick paper with minute attention to press quality, in an edition of 1000 copies. Each copy of this book includes a signed and numbered giclée print and a letterpress-printed coaster, all in a mylar sleeve.

Sir Alfred No. 3 is so densely allusive and double-triple entendred that it won’t interest everyone in cracking its codes. Film fans and lovers of golden age comics familiar with the sources of this material will find this completely compelling, as will anyone who appreciates graphic design and beautiful print production. That’s a very tightly defined group, but should you come across a copy on a shelf somewhere, you should snap it up. If you have even a passing interest in the commentaries on celebrity, sex, media and mythmaking that Hensley has packed into this book you’ll be rewarded with more to think about than the average graphic novel can hope to leave you with.